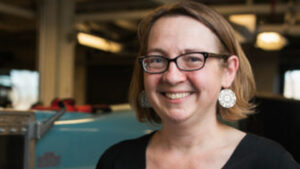 Jenn Stroud Rossmann, professor of mechanical engineering, was featured on the March 31 edition of Short Wave, National Public Radio’s science-themed podcast, where she explained the science behind the Wiffle ball’s wicked curve. Rossmann has studied Wiffle ball aerodynamics and has had a study published in the American Journal of Physics.