Opportunities in Chicago and Baltimore will enable Hussain to pursue interests in economic development, social entrepreneurship, and community engagement Twitter

Yumna Hussain ’25 has a full, academically enriching summer ahead of her, with her acceptance into a competitive undergraduate program at the University of Chicago that aims to foster diversity in economics and as a Gladstone Whitman ’49 Fellow supporting a West Baltimore redevelopment project. 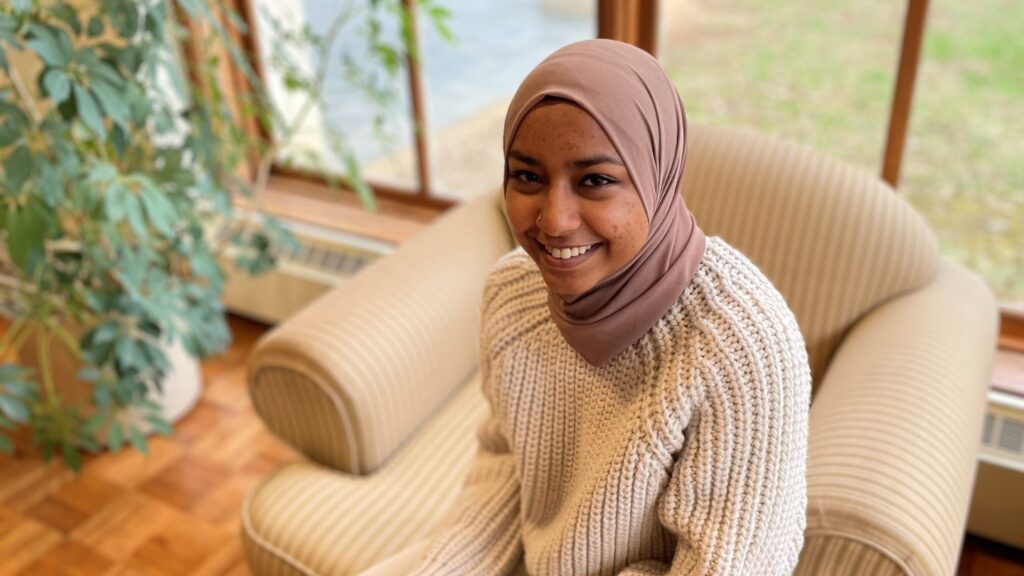 “Economic development, specifically in support of women and children, is what I’ve always wanted to get into,” says Hussain, who’s majoring in economics and mathematics. “Taking that class showed me that you could create environments of agency where women and children could do that on their own.”

Picking up on Hussain’s interests, Hutchinson, associate professor of economics and policy studies, introduced her to the annual Expanding Diversity in Economics Summer Institute (EDE) at University of Chicago, which accepts 45 undergraduates from colleges and universities around the country. The host agency for the EDE summer fellowship is the Becker-Friedman Institute, which is named in honor of Gary Becker and Milton Friedman, two of the most celebrated and distinguished Nobel Laurates in economics.

The program strives to encourage more college students from a broad range of backgrounds to study economics and inspire them to consider economics as a way to improve lives.

“It helps push people of color, people who aren’t in the field of economics right now,” Hussain says. “And their representation is needed. This program will not only help me build skills in theoretical economics and statistical analysis, but it’ll kind of push me into a place where I can better recognize the many different people who need so many different types of representation, specifically in economics, because it impacts us all.”

Hussain is from Sri Lanka, whose people are protesting the government over the lack of basic rights, and she would like to one day return home and pursue human rights law after Lafayette.

“The effects from Sri Lanka’s civil war, which ended in 2008, are still being felt and have made women and children the most vulnerable,” says Hussain, who described how her mom and sister endure 12-hour power cuts while others routinely stand in line for basic necessities.

“I feel like it’s throwing us back a century. It speaks to how you need people in positions of power who will do the necessary things to hold the country together,” she says. “This program creates people who understand the importance of creating economic agency and facilitating growth and change.

“Some part of me wants to pursue law, specifically human rights law, and get involved with the many problems back home that need to be solved,” Hussain adds. “So I think this is a great gateway for that. But also, in speaking to Prof. Hutchinson and learning about this program, there’s so many other aspects of economics that I can get involved in that will help make the situation better back home.”

Hutchinson says he has been impressed by Hussain’s “intellectual courage, inquisitiveness, unbounded imagination and creativity, and heightened interest, analytical discipline, and intellectual thirst to work through big and multilayered ideas.”

He adds, “She was particularly keen on better understanding how government’s commitment and action, especially in social entrepreneurship aimed at building the instrumental capacities for citizen agency and freedoms, could strengthen agency and human security, expand the freedoms people enjoy, and reduce polarization in social living, globally and locally.”

She also displays “great social manners and deep respect for the perspectives of others, and mature empathy for their intellectual and emotional vulnerabilities,” Hutchinson says.

After the EDE program wraps up at the end of June, Hussain, as a Gladstone Whitman ’49 Fellow, will head to West Baltimore in July, where Hutchinson, founder of Lafayette’s Economic Empowerment and Global Learning Project (EEGLP), is co-leading a multiyear collaborative co-learning effort aimed at bringing social and economic redress to West Baltimore communities.

The collaboration involves Lafayette faculty and students partnering with diversely experienced West Baltimore stakeholders in developing recommendations to transform communities into places of economic prosperity and community wealth, and improve their well-being.

“This project also aligns with what I’m really interested in, which is essentially helping people achieve their fundamental freedoms,” Hussain says. “There’s a lot of community engagement. And I feel like the community itself is involved in the decisions that will impact them. And I think that’s so important.

“I’ve talked with some of the older Whitman fellows about their experiences, and it’s just so interesting to hear from them. It makes me want to dip my toes in the water and see where this all goes.”

Empowering a renaissance in West Baltimore