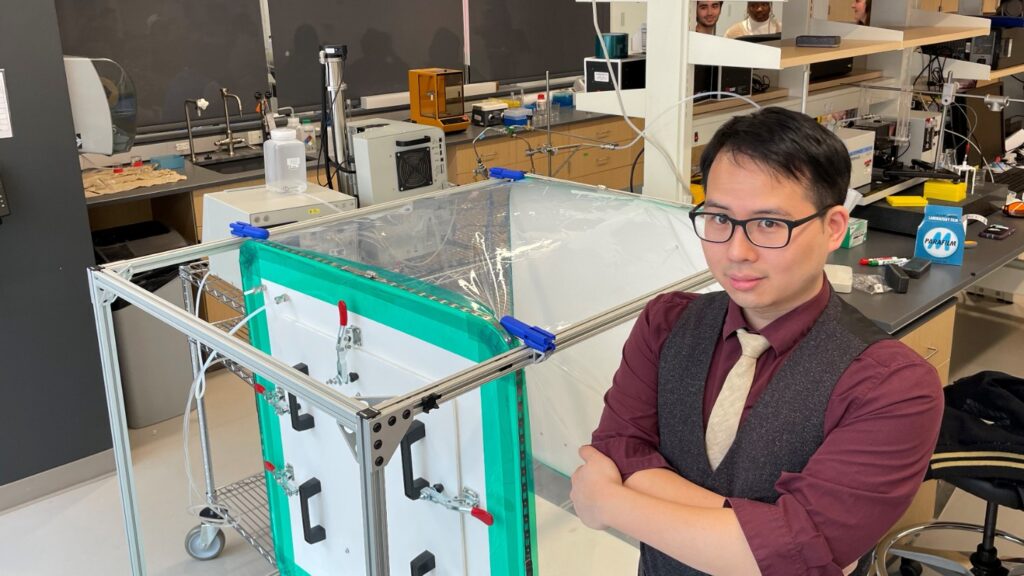 Joe Woo, assistant professor of chemical and biomolecular engineering, has received a National Science Foundation grant to study the properties of atmospheric aerosols, to better understand their effect on climate change.

“My research looks at atmospheric aerosols, which are little particles in the atmosphere that can either grow to become clouds or they can absorb light,” Woo says. “So smoke, haze, fog—any sort of thing that is like a solid or liquid floating around in the atmosphere. Specifically, I look at water-based aerosols that are in the air and can react with other organic compounds that are emitted through various sources.”

Atmospheric aerosols contribute to public health and the warming of the atmosphere, he says, adding that the $200,000 NSF award will help him and his team of student research assistants understand the chemistry of the particles and how they react to sunlight.

“In climate change models, the largest source of uncertainty is coming from atmospheric aerosols, because they can both warm up or cool down the atmosphere,” Woo says.

“When aerosols react in sunlight they behave differently than when they’re reacting in the dark,” he adds. “And while we have a pretty good idea of what goes on in the dark, we don’t really know what happens in the sunlight. If we can get a better handle on aerosol properties in the atmosphere, we have a better understanding of the climate at large. So that’s what our research is aiming to address.”

Woo already built an atmospheric chamber in his lab, which he completed in 2020, and plans to use the NSF grant to purchase a companion piece of equipment that sorts and sizes atmospheric aerosols.

The particle size counter can be used for a variety of applications, including seeing how different size aerosols affect the climate in different ways and even detecting and measuring aerosols containing viruses.

“It will allow us to get a lot more information about the individual properties of differently sized aerosols once they’re in the atmosphere, and how they behave if exposed to a lot of sunlight or not a lot of sunlight,” Woo says. “We’re also building a bunch of UV lamps to put on the outside of the particle chamber to approximate light conditions.”

“I feel that the research we’re cultivating here is relevant to several different avenues of interest at Lafayette,” he says. “It also can involve different subsections of the community depending on what they’re trying to look at.”

For example, the research applies to a core engineering course on process controls and to chemistry by offering opportunities to study the properties and composition of atmospheric aerosols.

“We’re covering a lot of fundamental engineering and scientific principles in order to get meaningful results,” Woo says. “I feel that’s going to be quite helpful for our students to get involved in this project, because they get to see several different facets of classes across departments and across divisions being applied in real time.”