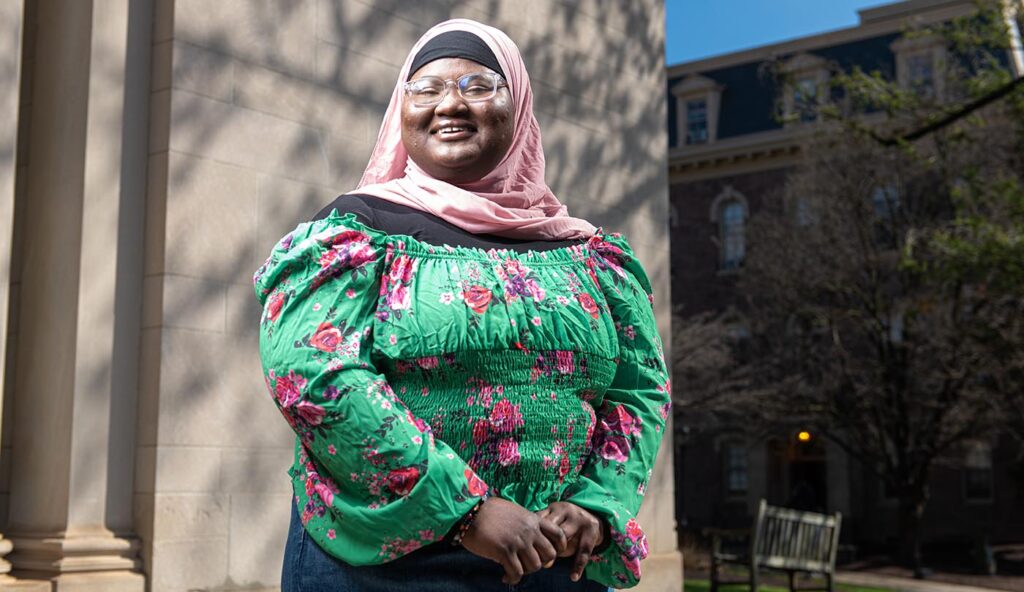 A 2022 Harry S. Truman Scholarship has been awarded to Fatimata Cham ’23, a Lafayette College student majoring in government and law and women’s, gender, and sexuality studies. Cham, 21, is a community activist and passionate about many issues, especially combating gender and educational inequalities. Cham is one of 58 outstanding students from 53 institutions to be named a Truman Scholar.

Cham is the second Lafayette student in just two years to be named a Truman Scholar. Savanna Touré ’21, who studied neuroscience, was the school’s first-ever recipient in 2020. (Touré is now a graduate research education fellow at the Mayo Clinic.)

Cham’s application journey started last spring when she met with Julia Goldberg, associate dean of advising and co-curricular programs, who also serves as director of the Scholarships and Fellowships Office. With guidance from Goldberg, she spent the following months evaluating her postgraduate plans and career trajectory.

The Truman Scholarship application is a multifaceted one that explores applicants’ leadership abilities, commitment to public service, issues, and values that they hold dear, and an exposition of their career goals and how they will accomplish them.

Lafayette officially nominated Cham in January; she learned soon after that she was among 189 finalists out of 705 applicants. The final step of the application—interviewing with a district panel (in her case, New York and Rhode Island)—happened in March over Zoom. “It’s a vigorous process that really pushes you to really think about your future,” says Cham, adding it also made her contemplate her past. “You reflect on personal experiences and get to know your story better.”

Growing up in the South Bronx, Cham experienced environmental injustices such as marginalized communities being subjected to unfit environmental conditions like air pollution. One particular concern is the Cross Bronx Expressway, a major freeway cutting through her borough, and the effects its emissions have on residents. She also dealt with disparity in the education system, especially compared to what resources were available to schools on, say, the Upper West Side. “They aren’t reading from the same textbooks,” she explains.

Outside of the classroom, her peers endured gun violence, poverty, and homelessness. “I would notice how my classmates would cope with a lot of these things,” says Cham. “That really pushed me into service.” Cham and her ninth grade school counselor eventually convinced her family to enroll her in an out-of-state boarding school.

In high school, she founded her own nonprofit called Muslims Matter, dedicated to dialogue about cultural concerns, including early childhood marriage and the role of women in Muslim societies. She’s been a member of the United Nations Foundation’s Girl Up mentorship program since 2018. And, in 2019, she published a book of poetry called Perfectly Imperfect, in which she tackles topics from mass shootings to beauty standards.

Matthew Stein, visiting assistant professor in government and law, taught Cham in the fall and was impressed by her consistent desire to improve her surroundings. “She’s incredibly devoted and thoughtful when it comes to her community,” says Stein. “And it’s uniquely genuine.”

Take, for example, what she’s done in student government at Lafayette: As the director of the equity and inclusion committee, Cham worked with College leadership on a proposal that made the Pard Pantry permanent so that students with food insecurities and financial strain can have meals, snacks, and supplies throughout the entire year. “Fatimata works tirelessly to make sure everyone has equal access to resources,” says Vanessa Pearson, director of student involvement. “Instead of shying away from the challenges, she steps up and leads with a compassionate heart.” 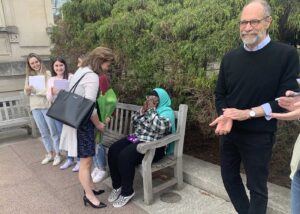 When Cham found out about the scholarship news, she was in the middle of The Politics of Fashion class on campus. Joshua Miller, professor of government and law, asked the entire class to head outside Kirby Hall, where President Nicole Farmer Hurd was waiting to inform Cham that she had been selected to represent New York state, and Lafayette, as a Truman Scholar.

In addition to receiving up to $30,000 toward a future graduate degree anywhere in the world, the elite group of young leaders are offered invaluable resources and opportunities to develop their skills and lay the foundation for a life of giving back—including special placement into internships and jobs within various sectors of public service or government. “They are looking for people who can be change agents,” says Goldberg, “and Fatimata is one of the most phenomenal movers and shakers that I’ve ever met. There’s so much more to Fatimata than what was even in her application.” 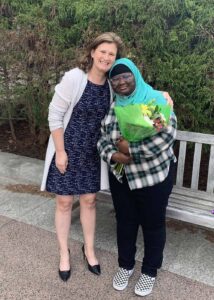 As a first-generation, low-income college student, Cham always knew that she would need a supportive community to help her pursue her career goals. “I’m very grateful because I now get to have this access to opportunities,” she says. “Being part of this scholarship is also being part of a huge network of people who are dedicated to a similar mission.” The 2022 Class of Truman Scholars will get together as soon as next month for “leadership week” in Missouri, where they’ll learn about different paths to public service and explore top graduate programs. Scholars are then matched with a nonprofit or program of choice after they graduate from college.

Cham understands the importance of representation, especially as a Black Muslim woman, and considers Pakistani activist and Nobel Peace Prize laureate Malala Yousafzai an inspiration. She even had the chance to thank Yousafzai on the Apple TV+ docuseries Dear… that debuted in March. Cham also wants to show girls—especially ones who look or think like her—that their dreams are attainable, too, whatever they may be. “They can achieve things regardless of standards and cultural stigmas,” she says, adding that her own community tried to discourage her from furthering her education. But that just motivated her more.

Looking ahead at this summer, Cham plans to return for another internship at Bloomberg. And, after graduating from Lafayette next year, she’ll embark on a new internship, possibly with one of the Truman-affiliated Washington Summer Institutes, Plan International,  before attending grad school—a possible match could be the global gender studies program at New York University, which is close to home. Ultimately, she wants to continue in philanthropy, maybe even with one of the many nonprofits she’s worked with in the past. Goldberg is encouraging Cham to apply for other prestigious postgraduate scholarships and fellowships.

Student activist tells Malala Yousafzai how she has inspired her to make change in her own community
Categorized in: Academic News, Class of 2023, Featured News, Global Impact, Government and Law, Scholarships and Fellowships, Student Profiles, Students, Women’s and Gender Studies