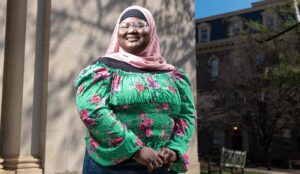 The Bronx Times reported on the selection of Fatimata Cham ’23 as a Truman Scholar. The Lafayette College student from the South Bronx is one of 58 college students in the country to be recognized with the prestigious graduate scholarship that is awarded to students who intend to enter governmental work or public service.

Cham’s passion for community and environmental activism traces back to her childhood growing up in the South Bronx, where auto traffic on the six-lane Cross Bronx Expressway has led to decade-long concerns regarding air pollution and environmental hazards.

Categorized in: Featured News, In the Media, News and Features, Students