Prof. Ian Smith, celebrating recent recognitions, demonstrates the importance of the humanities in today’s society and the voice that can be raised in the academic world when one chooses to engage in 'talking race' Twitter 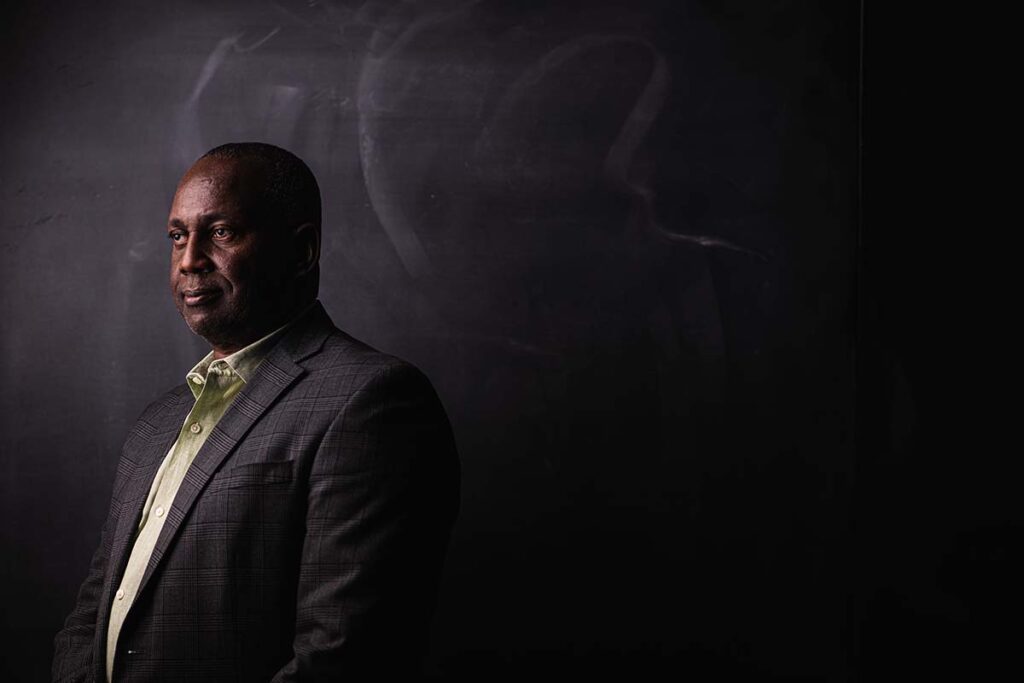 Ian Smith, professor of English and Richard H. Jr. ’60 and Joan K. Sell Chair in the Humanities, is causing academics in the early modern period to reconsider race. As the 458th anniversary of the birthday of William Shakespeare approaches, it is worth reflecting once again on the special relationship Lafayette College is said to enjoy with England’s most famous playwright and the role Smith has played in reframing contemporary Shakespeare scholarship.

Over the years, Smith has been the recipient of many awards and accolades. But 2022 has been especially notable in this regard. Most recently he was elected vice president of the Shakespeare Association of America (SAA), a three-year term over which he will rotate from vice president to president to past president, playing a major role in how Shakespeare studies is fashioned.

“SAA is an important part of my professional life and the preeminent organization of its kind in the country, doing important work for its 2,000 members, so this is a real honor,” he says.

Smith will be undertaking a new research project during 2022-23, titled The Skin You’re In, at the Huntington Library, where he has been appointed for the year as the Los Angeles Times Distinguished Fellow in the History and Culture of the Americas. In his book Black Shakespeare, to be released soon by Cambridge University Press, Smith examines the relationship between reading and race. The Los Angeles Times fellowship will allow him to continue his exploration of race, this time from a somewhat different perspective—that of skin.

“While I have dedicated much research to race, I have not talked about skin color,” he says. “Doing so too early in my career felt too obvious. Skin color is often associated with race in the U.S., but race is far more complex than skin. What’s happening in the world today makes it feel more compelling for me to return and talk about skin—both black and white—in Shakespeare’s time and its consequences for today.”

Another honor recently granted to Smith by the SAA is its Shakespeare Publics Award that recognizes pioneering and/or culturally significant efforts to foster, engage, support, and sustain broad and diverse Shakespeare publics through teaching, scholarship, performance, and/or activism. When the Folger Shakespeare Library embarked on creating an educational program about Shakespeare and race for high school students, the Folger asked Smith along with Patricia Akhimie (Rutgers) and David Sterling Brown (Binghamton) to undertake the project. Each laid out plans and questions for high school teachers, with Smith focusing specifically on the plays The Merchant of Venice and The Tempest.

“I feel this award truly connects me with the goals of the Sell endowed chair I hold at the College,” he says. “Support from alumni that allows me to do work like the project at the Folger brings life to my scholarship. In this case, it helps benefit many young people who might not see the value in the early modern period or humanities, as both can feel so distant from the realities they face despite the significant continuities between their world and the world of 400 years ago.”

Smith’s specific concern within Shakespeare studies allows him to bring his scholarship, teaching, and service into close alignment, and to speak directly to issues of diversity, inclusion, and equity that are of critical concern to Lafayette and championed by its new president.

One of his most heralded forays into these complex matters is his essay “Othello’s Black Handkerchief,” which has become a portal through which all scholarship on the play will now be read. In it, Smith calls into question the traditional interpretation of the play’s iconic handkerchief as white, determining through careful study that the handkerchief was brown. Smith turns this simple object into a powerful metaphor for the racial bias in scholarship, criticism, and teaching in Shakespeare and early modern studies. He enables us to think differently and critically about what was once taken for granted.

What inspires Smith to undertake such projects? Smith generously credits the English Department for its support. “For years they have invested in diversity, equity, inclusion, and justice initiatives,” he says. There is no doubt that through his investment in these issues—in his classroom and his scholarship, for the English Department, the College, and the community beyond—Smith has demonstrated in numerous and rich ways the importance of the humanities in today’s society and the persuasive voice that can be raised in the academic world when one chooses to engage in “talking race.”