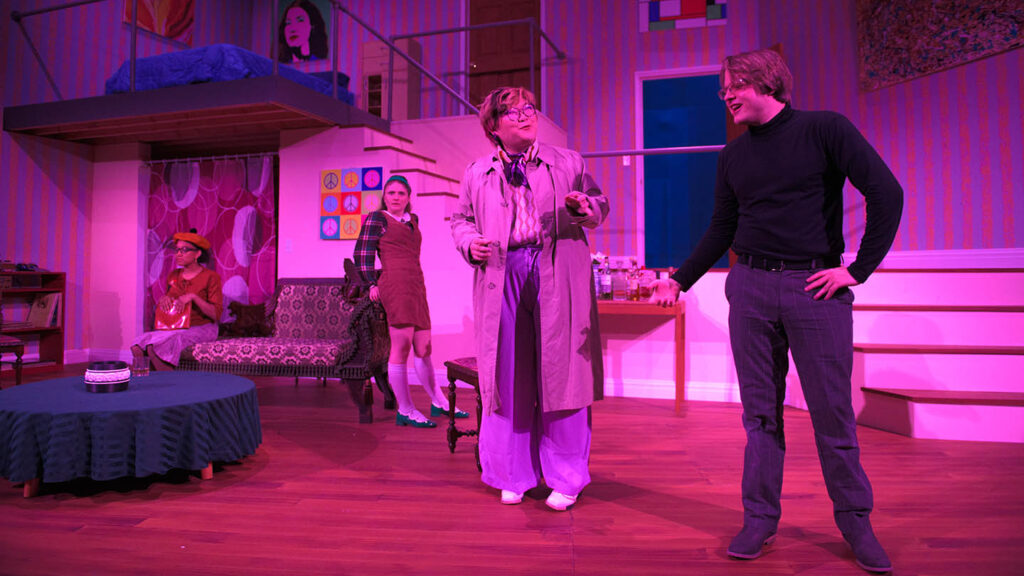 British accents. Pratfalls. A life being ruined from every angle. All the conventions of farce are on display as students take the stage in Black Comedy by Peter Shaffer, a mainstage production in Weiss Theater.

The play, produced by Lafayette’s Theater Department and directed by C.J. Silverman ’22 with production assistance by Michael O’Neill, associate professor of theater, relies on one key joke that drives the production: light.

A simple fuse goes out, but rather than bathe the stage in darkness, the opposite occurs.

The play begins in near complete darkness. When the fuse pops, the stage lights blaze to life, and the actors stumble through a darkness only they can see. We, on the other hand, see it all—the antique furniture stolen from a neighbor who collects, the arrival of a fiancée and her uptight father, the dealer hoping to commission some art, an old flame who wants to undermine a marriage, and the man at the center of it all, whose problems, literally and figuratively, collide around him.

The show is the senior project for Silverman, a theater and computer science double major.

Like for the show’s main character, the lights came on suddenly for Silverman. He took intro to theater and was soon cast in a play. He followed it with a stage direction class taught by O’Neill. It was clear that theater was more than a minor or the extracurricular activity he planned it to be.

In his junior year, he began planning for this project. As a fan of British farce, Silverman explored a few plays before deciding on Black Comedy. “I liked how everything goes wrong but seems to be perfectly right for what the character deserves,” he says.

The show began slowly through production meetings, auditions, and casting. The rehearsal schedule bumped up against other productions on campus. But it gave Silverman and crew time to study 1970s fashion, furnishings, and architecture. The costume designer recreated the looks of 70s London while the technical crew built a full set of stairs, working doors, and a trap door. The stunt coordinator taught cast members how to trip and fall.

“The technical details with lights and sound intersect with my computer science major just like the project management work in computer science is akin to directing,” says Silverman. “I love doing both and having a range of problem-solving skills helps me in both programs.”

Silverman is part of a computer science senior project as well, working with a team creating a database management system for ProJeCt of Easton.

Onstage or off, his options are open after graduation to whatever lights the way.