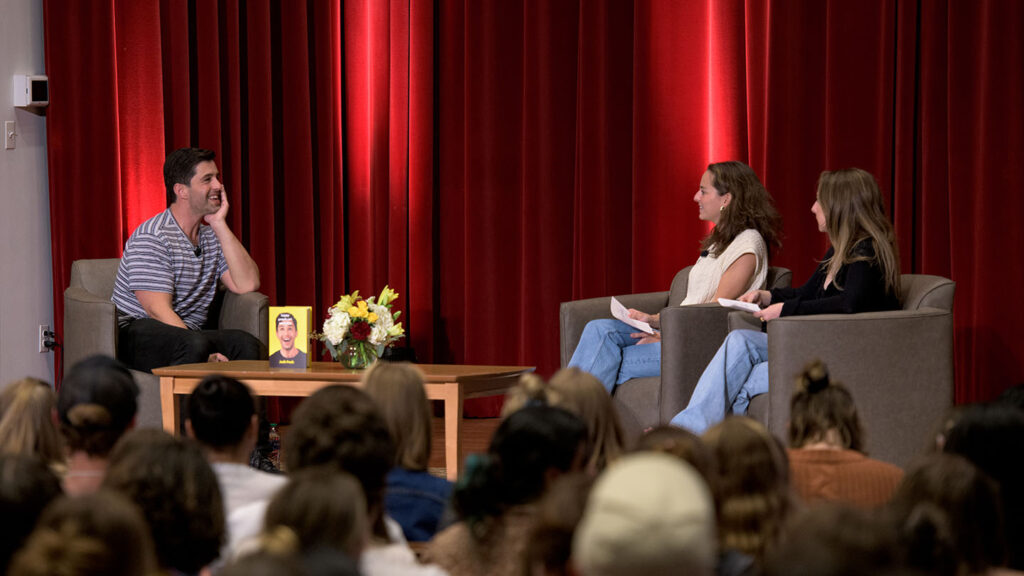 On May 3, Josh Peck visited Lafayette’s campus as the 2022 Senior Speaker. Peck, a New Jersey native, is well known for his role in Nickelodeon’s Drake and Josh, which ran 2004-2007. He currently stars as Drew in How I Met Your Father and has amassed over 3.5 million subscribers on his YouTube channel. His memoir, Happy People Are Annoying, was released this March.

The yearly event is organized by the culture, media, and entertainment committee of Lafayette Activities Forum (LAF) and sponsored by the Class of 1963 Speaker Endowment Fund. According to Sarah Smith ’24, committee president, a number of factors went into the choice to bring Josh Peck to campus. “This generation that is currently graduating grew up on Drake and Josh, and Josh is currently in the social media spotlight. He’s only a little bit older than us—he’s 35. So he’s someone that we can relate to in that way where he understands our struggles of being young in this day and age,” Smith says.

Peck spoke to moderators Sabrina Sicilia ’22 and Emilie Biolsi ’22, co-presidents of LAF, about a range of topics, from his time on Nickelodeon to his life on social media to his struggles with mental health over the years.

His decision to write his memoir came from a desire to provide guidance to people as he moves into a new stage of his life after finding that most nonfiction and self-help books were written by people reflecting near the end of their lives. “I love when people who give me advice are just a few steps ahead of me instead of at the finish line,” he says. He hopes to inspire students to treat themselves kindly as they find their way on their own journeys.

Soaring through the final week of classes