“Everybody has their own idea of what Lafayette ideals should be,” says Alex Ashley ’22. “But what is the ‘ideal’ student?”

This kind of critical thinking is perhaps one of the reasons why Ashley, a chemical and biomolecular engineering major and mathematics minor from Jamaica, was awarded the 2022 Pepper Prize. The annual George Wharton Pepper Prize recognizes a senior who best represents Lafayette’s standards. For Ashley, being an ideal student means creating a welcoming space for everyone.

He did exactly that when he helped to create a diversity, equity, inclusion, and justice workshop last fall for first-year engineers alongside Rob Young ’14, director of intercultural development. The event was an introduction to contemporary societal issues—implicit bias, microaggressions—and will continue to be incorporated into the first-year curriculum. “The ideal Lafayette student should be aware of these issues,” says Ashley, who served as president of the Engineering Student Council this year. “Everyone has different experiences and different backgrounds, so we should act accordingly.” 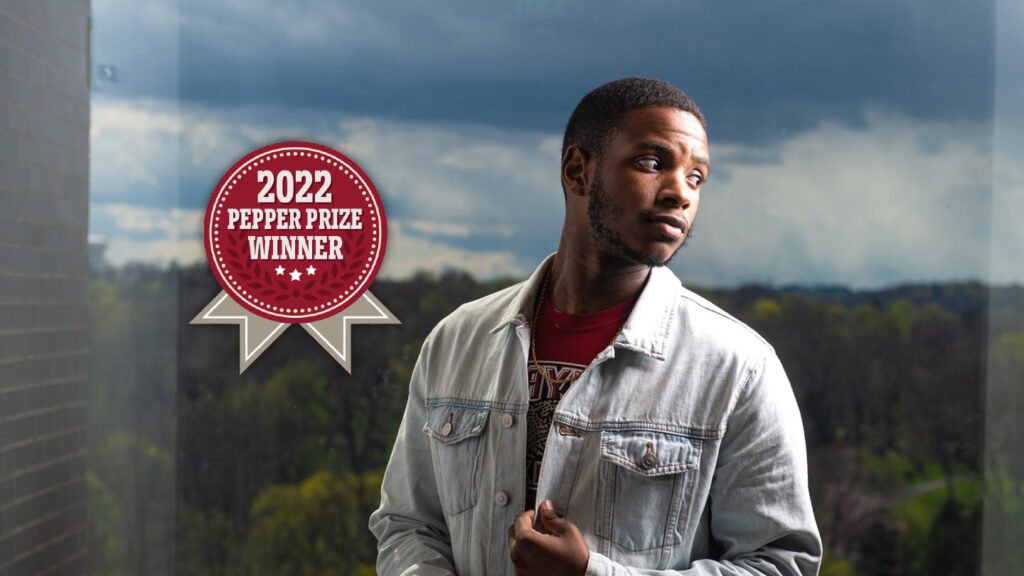 Growing up in the Jamaican mountain countryside, Ashley cultivated a humble and hardworking attitude early on. For several years, he would wake up at 4 a.m. to make the three-hour drive to Kingston, where he attended school. He’d return home around 10 p.m., have dinner, then go to bed at midnight—and do it all over again the next day. “It was a challenge,” he says, “but seeing all of the sacrifices my parents had to make just for me to get an education further propelled me to excel in school.” His hard work paid off: Ashley was tapped as a Lafayette-Jamaica Scholar in 2018; the prestigious scholarship covered tuition for four years, plus a stipend for studying abroad.

So when Ashley got word that he became one of the finalists from Jamaica and the Commonwealth Caribbean for the Rhodes Scholarship in October, he immediately called his parents back home to share the news. There was some celebration—the governor general even congratulated him in person—but it’s not the Jamaican way to flaunt success. Explains Ashley, “I’m told to let my work speak for itself.”

Throughout his time at Lafayette, Ashley assisted Ryan Van Horn ’04, associate professor of chemical and biomedical engineering, as an EXCEL Scholar. These types of positions, which are paid, require students to make meaningful contributions to a faculty member’s project or research. Ashley met Van Horn during his First-Year Seminar, and they started working together in the spring semester. “With research, you never know what to expect,” says Ashley. “But Prof. Van Horn taught me that it’s the process, and how you get to the end result, that really matters.” Their NSF-funded research focuses on the structure and properties of polymers and how they can be used in the biomedical field. For example: How, exactly, does the film on a pill capsule break apart and release medicine over time?

All of that experience in the lab has prepared Ashley for his own career in science. This fall, he’ll join the doctorate program in chemical engineering at Drexel University, where he’ll study materials in renewable energy. “My dream is to significantly improve solar cell technology, which can then help to mitigate the effects of climate change,” he says. His hope is to develop and incorporate this new-and-improved technology into electric vehicles and, eventually, into other forms of transportation like buses, trains, ships, and maybe even airplanes.

But first, the Pepper Prize recipient will deliver a speech to his fellow Pards during Lafayette’s Commencement ceremony. His message: Maximize opportunities, whatever or whenever they may be. “What are you going to do now, moving forward? We all have to ensure that we move forward,” says Ashley.

He also has advice for those students who still have a few years left at Lafayette—get involved on campus. Go to activities, join a club, and meet people. Ashley’s personal connections with students and staff, along with his experiences outside of the classroom, anchored his well-rounded experience at Lafayette. As a first-year student, he joined the College’s step team—the first male to ever do so. “Dancing and music are my passions, so this was my avenue of expression,” he says. He also studied abroad in Madagascar and Germany through Lafayette’s engineering program. And, during the latter part of college, Ashley fell in love with being in the kitchen and frequently hosted members of the International Student Association for some cooking and conversation.

He’d also tell the undergrads to not sweat the grades too much. And if you need help, all you have to do is ask. “Get some courage and send emails or talk to people,” he says. “There are many resources here to make your life so much easier and your experience so much better.”

After all, college—like any good experiment—should have some revelations to be made along the way.