Government and law professor shares expertise with The 19th Twitter 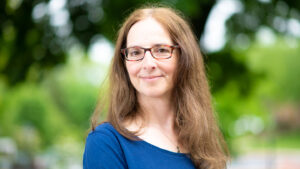 The 19th called Biden’s response to the overturning of Roe v. Wade “slow” and “subdued.” But experts, including Silverstein, indicated the administration’s actions over the past week show a commitment to protecting access across the country and delaying state restrictions.

“What seemed to be slow movement in the immediate aftermath of Dobbs on the part of the Biden administration was disheartening to pro-choice advocates and people in the Democratic Party who really strongly support abortion rights and reproductive justice issues,” Silverstein said. “And so the fact that steps are now being taken provides some optimism to those who were hoping that the administration would lead more forcefully on the issue.”

Silverstein is a specialist in law and society. Her research has focused on laws mandating parental involvement in the abortion decisions of pregnant minors. She is the author of The Supreme Court (Greenwood Press, 2021), Girls on the Stand: How Courts Fail Pregnant Minors (NYU Press, 2007), and Unleashing Rights: Law, Meaning, and the Animal Rights Movement (University of Michigan Press, 1996).