When Helena Silverstein, department head and professor of government and law, provides an overview of the Supreme Court in her Constitutional Law courses, it covers questions such as: How is it structured? How are judges chosen? What are the influences on their decision-making?

It was with this in mind that Silverstein organized the chapters in her newest book, The Supreme Court, released earlier this year by Greenwood Press. The work is part of ABC-CLIO’s Student Guides to American Government and Politics series. Each volume in the series provides an accessible and authoritative introduction to a distinct component of American governmental institutions and processes, and shows how it pertains to America’s current political climate and the rights and responsibilities of citizenship.

“I’ve spent a lot of time teaching about and thinking about the courts, and the first several weeks of [my Constitutional Law] class are spent on an overview of the Supreme Court. That overview, and the general questions I introduce students to, provided the foundation on which I organized the book,” explains Silverstein. 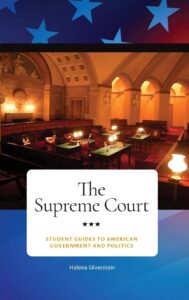 “The way that I approach the study of law is to try to demythologize it and demystify it. The U.S. Supreme Court is the pinnacle of the U.S. judicial system, which is supposed to deliver justice, equality, and fairness. But there’s also power, politics, partisanship, and polarization involved, as well as history, context, and change. While a prevailing myth holds that law and courts are well insulated from the political realm, politics wraps itself around the law. To understand law, you have to understand politics.”

Though politics and polarization have been involved throughout the Supreme Court’s history, a great deal of awareness about the Court—though not always accurate—is due, in part, to the 24-hour news cycle and social media. This massive amount of public interest also has been fueled by several late justices, including Antonin Scalia (associate justice 1986-2016) and Ruth Bader Ginsburg (associate justice 1993-2020), whose willingness to fight for their divergent constitutional visions made them public icons for opposing sides of the ideological spectrum. Given the pitched partisan battles over their replacements and the related implications for judicial decisions on contentious political and social issues, the Court has been locked in a moment of significant magnification.

“Scheingold’s book is not just about the Supreme Court. It’s more about the law in general and the mythology of law—what he called ‘the myth of rights.’ And that really influenced the way I see law and the need to deconstruct and demythologize it, and to recognize where politics and partisanship are located in the courts,” says Silverstein.

Two of Silverstein’s favorite parts of the book (and sections she hopes students take solid information away from) trace the different approaches to constitutional interpretation and examine the extent to which the Court contributes to social change. In one chapter, she identifies multiple ways of interpreting the Constitution, but notes that the document itself does not provide a road map for which approach to use. “Those debates really matter for the outcomes of the cases,” says Silverstein.

In another chapter, she explores research that asks just how impactful the Supreme Court really is, something she also takes up in her capstone seminar on Law and Social Movements. Using the 1954 ruling in Brown v. Board of Education and its aftermath as an illustrative example, the chapter discusses the Court’s promise, its failures, and how it is mobilized by those seeking social change. Part of the myth of rights, she says, is that “we perceive the courts as a potentially important avenue for advancing social change. But it doesn’t always work as we might expect it to.”

Silverstein, who is also the author of Girls on the Stand: How Courts Fail Pregnant Minors (NYU Press, 2007) and Unleashing Rights: Law, Meaning, and the Animal Rights Movement (University of Michigan Press, 1996), is currently working on her fourth book, Political Control of America’s Courts: Examining the Facts, with EXCEL Scholar Kelly Mwaamba ’22.

Categorized in: Faculty and Staff, Featured News, Government and Law, News and Features