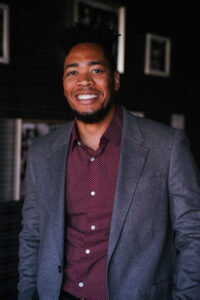 When we think of facilitators, the first people who come to mind generally are leaders or people we would refer to as “team builders.” Of course, facilitation is about meetings and teams. But when it’s effective, it can be much more. Facilitation is a skill and behavior that sparks meaningful discourse and can help address and answer some of life’s most difficult topics and questions. Done well, it can have a positive impact on all aspects of life.

Desmond Austin-Miller ’17 knows how crucial conversation can be when two sides are at an impasse. In his role as a strategic designer and facilitator, he helps move people toward positive dialogue and gets to know them well in the process. Austin-Miller sat down with us to reflect on how his anthropology and sociology background helps with his roles today, and why helping people to communicate more effectively is so important to him.

What made you focus on anthropology and sociology when you came to Lafayette?

I’m a Posse alum. I’m from Washington, D.C., was born and raised there, and I live there now. Growing up in a city like this, you’re totally steeped in all the theories and systems and forces at play that you learn about in classes. I’ve described this to other people who have asked me a similar question—and I’ve told them it gave me the tools and vocabulary to express things that I had always experienced and things I knew innately but didn’t necessarily have the right tools to put voice to. Things around race, things around class, gender, and sexuality, and concepts around space. The use of spaces in cities, especially in a city like D.C., is very, very interesting. When you look at the differences between federal and local space here, how is that all kind of coming together in this hodgepodge of a city? So, when I came to Lafayette, I wasn’t one of those people who tried to pretend they would be an engineer. My second semester, I saw this thing called anthropology and remember thinking, ‘What is that?’ I thought it was archaeology. I didn’t realize anthropology could be used in a cultural sense. And the same with sociology—I didn’t realize there was an actual science behind why and how people interact with each other in the way they do. From my very first class, I just knew that this was going to be my major.

What drew me in was that I was literally a Black kid growing up in a city. This was what I experienced, what I see and feel, and what I think on a regular basis. It’s just adding an empirical, collegial, academic kind of lens to it and giving me the tools to express myself and think about the things that I’m seeing and experiencing in a diagnostic and critical kind of way.

How did your A&S background prepare you for your current work as a consultant?

A psychology course definitely teaches you how to think about people and understand where they’re coming from. But I feel like what A&S does—to a deeper extent, to me— is teach you several surface-level things about a person’s experiences. It allows me to interface with them better—not because I know things that make them tick or the things that motivate them, but the things that might motivate a similar person—someone who has a similar identity or disposition. If I know about this thing called wealth inequality, if I know about this thing called code switching, if I know about this thing called dramaturgy, and the way people manage their own body movements and phrasing in order to match or to interact with other people—that gives me the set of tools I can use to truly understand someone when they’re talking to me and truly understand what they’re going through and what they might have experienced in their life. That’s great for getting to know people on an individual basis.

In terms of what I do now, it’s also great in a business context, where you really don’t have much time to get to know somebody. In business, you often meet with people in increments of 30 minutes to an hour throughout a day. A lot of those times, they’re really busy executives or they’re really important clients to your company, and it’s important not to waste their time. The more you can extrapolate those identity-based experiences from them, the more you can work with them to see what fits and what doesn’t fit.

The more you hone that discipline while you interact with all these different types of people, the more effective you are as a consultant or a business person, especially when you’re dealing with people who work internationally. There’s a whole other kind of lens you can apply there with cultural relativism. As an A&S student, I learned skills that have served me well, like how to communicate with people who are from different parts of the world or places I’ve never been to.

You describe your current role as a “design consultant.” What is a typical day-to-day like for you?

When I say ‘design,’ I’m referring to conversation design. It’s facilitation and thinking really critically about the sequence of conversations that a group needs to have in order to make progress on a problem they’re trying to solve. For example, say you’re working with a bank that just bought another bank, and both sides really didn’t want to merge. That merger, however, has now made them one of the biggest banks in the world. The problem is, their people don’t know each other. And each bank has its own legacy systems, and the integration isn’t going smoothly. Now, they need to figure out how to take on their competitors and put some of those differences aside. So, I get to think about what types of conversations these people need to have—so they, as a group, can come together and think about how they’re going to perform in the market going forward. My day-to-day revolves around planning, designing, researching, and gathering the rationale for delivering those types of experiences for clients. It’s one of the most engaging and rewarding roles I’ve ever had the privilege of playing.

How did you step into that role and decide you would like to actively help people better communicate?

The Posse alumni network has a really strong relationship with Deloitte. Through networking at a Posse event, I met somebody who works in the part of the company that I work at now. I’ve been with Deloitte for the last two and a half years. So, that’s my journey in a nutshell. But the longer story is, I actually became really fascinated by the book Ours to Lose (by Amy Starecheski), which is an oral history of squatters on the Lower East Side of Manhattan. I ended up connecting with the author after a lecture she gave in (professor of anthropology) [Andrea] Smith’s social memory course. At the time, I was working for a nonprofit street paper called Street Sense here in D.C. as an editorial intern, and I asked Dr. Starecheski if we could keep in touch. One thing led to another, and I ended up living and working in New York City for a year, studying as an oral historian in Columbia University’s oral history M.A. program. When I graduated, I found myself at a crossroads, choosing between a potential oral history internship or moving into a consulting firm.

What advice would you give to A&S students, or prospective students, who might not know anything about how A&S education can benefit them?

If you choose this major, it will give you the skills to engage in dialogue about the difficult things that you might have always known or have been aware of, but didn’t necessarily know how to talk about. Then, having that skill set lets you think about, ‘How do I help other people talk about these things?’ Over the last few years in the business world, people who have these types of skills are highly desirable. All of the big companies—the Apples and Googles of the world—are scrambling to find people who have these types of backgrounds right now. Because for better or for worse, right after George Floyd, when we experienced a summer of racial and social unrest across this country and the world, companies began to look inward. And they asked, ‘What are we doing to contribute to these things that are hurting our society right now? What are we doing that’s contributing to the inequalities and to the discrepancies? What is our role in rectifying those things?’ A lot of these companies are saying, ‘Wait a second, we have a lot of power to do this type of work. And not only do we have a lot of power to do this type of work, we desperately need people to teach us how to do this type of work.’ So now, if you choose this major, not only does it make you desirable to some of the world’s most influential and well-resourced employers, but it gives you that skill set to go into those organizations and influence real change.

Exploring the crossroads of education and anthropology