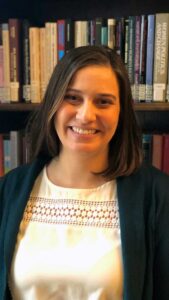 Melissa Galloway, associate professor of chemistry at Lafayette College, was recently awarded a $327,000 National Science Foundation (NSF) grant through the Research in Undergraduate Institutions (RUI) program. The prestigious three-year grant will help fund Galloway’s research project titled “Chemical phenomena of complex carbonyl-ammonium aqueous aerosol mimics,” in which she and several students are investigating the impact of atmospheric particles on the environment.

“I’m excited and grateful for the opportunity,” Galloway says. “It took me three years to write this grant, and a lot of work went into it. Considering only 5%-15% of people who apply for grants actually get them, it’s a huge honor for the NSF to say the research I’m doing is good and they want to give me money to continue doing it.”

Galloway’s study explores the chemical reactions between the thousands of chemicals and compounds found in particles in the atmosphere—which are smaller, even, than rain droplets—and whether or not the complexity of those reactions could potentially play a role in changing the atmosphere and affecting issues like climate change.

“Ever since I started grad school, I wanted to be able to say I’m working toward something that could help improve the world,” Galloway says. “Every project I’ve worked on for the past 15 years has been, in some way, trying to understand the atmosphere so we can do a much better job of predicting what the future of our atmosphere will be. And this study is a building block to get one step closer to that.”

Three Lafayette students are working on the project alongside Galloway—Paige Murphy ’24, Hope Tracey ’24, and Stephanie Ingwer ’24—and gaining valuable undergraduate research experience that could serve them well into the future. “When students come into my lab, they know maybe a little bit of general chemistry and organic chemistry,” Galloway says. “One goal of this project is, by the end of it, that students have a research paper, have gone to a conference, and have had this lab experience that they wouldn’t have had if they were just sitting in a classroom.”

Galloway started teaching at Lafayette in 2014, and she teaches courses in general, environmental, and analytical chemistry. She and Lindsay Soh—associate professor and department head of chemical and biomolecular engineering—also were awarded a joint NSF grant in 2016 that funded the purchase of a liquid chromatography, supercritical fluid chromatography, mass spectrometry system for energy- and environment-related research. Galloway says students are her favorite part of working at Lafayette.

“I love teaching, and I love research, but it’s the students that make it fun,” she says. “You walk into the classroom, and they’re doing their best, even if they’re not having their best day. I love getting to know first-years, who are eager and excited, and who may not yet know what they want to do in the world. And being able to walk into a lab, spend hours immersing myself in research, and work with students in a whole different way—it’s rewarding for me.”