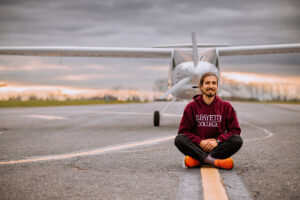 Lehigh Valley News recently reported on “Lafayette Gets Electric,” a project spearheaded by Remy Oktay ’24, which culminated in an electric plane flyover above Fisher Stadium before Lafayette football’s 158th Rivalry game against the Lehigh Mountain Hawks.

“Leading up to it, so many people have said, ‘I didn’t even know that electric planes existed,’” Oktay said in the story. “Getting people aware of that and getting people to be excited in that, invested in it, will only help to accelerate that adoption and innovation.”