Valerie Melson ’17 is almost self-effacing when describing herself, calling the opportunities she has received during her stellar college career a combination of “sheer luck and niceness.”

The Lafayette community would beg to differ and voted Melson the 2017 winner of the George Wharton Pepper Prize. 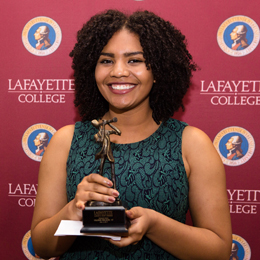 The Pepper Prize is given annually to the student “who most nearly represents the Lafayette ideal,” which Melson defines as the student who “dedicates their college career to advocating on behalf of their fellow students, promoting intellectual discourse around difficult topics, creating spaces for others to feel at home, and bringing the community together around the common goal of equity.”

That pretty much sums up Melson, a neuroscience major and Posse Scholar, who served as president of the Association of Black Collegians and a coordinator for Kaleidoscope, a social justice peer advocacy group on campus.

Last semester she helped organize a campus-wide conversation in response to student protests related to race at the University of Missouri. More than 500 students, faculty, and staff attended #MORETHANMIZZOU in Farinon Atrium.

“This is a different place than other campuses,” she says.  “Our administration wants to have these conversations.”

Melson also played an integral role in crafting the “List of Diversity and Transformation Concerns of Marginalized Students,” a 15-page document that students took to President Alison Byerly. The list cites topics that range from housing and safe space concerns to faculty and Greek life issues. It led to the creation of the Equity, Transformation, and Accountability Board, which Melson spearheaded.

In recognition of her social justice work and service to the campus community, The McDonogh Network recently awarded her the 2017 Jeffrey Robinson ’80 Leadership Award.

“I’m honored,” Melson says, because such an award, from the people with whom she sees and interacts every day, feels more personal and “closer to home.”

“The black students who came here before me paved the way for me to do what I have been able to accomplish,” she says. “It means a lot coming from a community I care about.”

Melson also won the Marquis Award, presented at the Aaron O. Hoff Awards ceremony to someone who “has influenced the behaviors, actions or opinions of others toward a common goal or purpose” and “models collaboration, handles controversy with civility, and places value on a common purpose.”

The three awards paint a picture of a young woman who cares deeply about others and is willing to spend the time and effort to affect change, especially within marginalized and underserved populations.

But there is even more to Valerie Melson.

Once she thought she wanted to follow in the footsteps her mother forged as a lawyer, but a molecular biology class at Sidwell Friends School in D.C. changed that.

Since joining the Lafayette community four years ago, summers have included a range of research internships after finding a mentor early on in Robert Kurt, professor and head of biology.

Additionally, her dedication to research, social justice, and an opportunity to work last summer in a Maryland HIV lab revealed what now looks like  her life’s passion: public health and community medicine.

“It is amazing to me how much of science is social justice,” says Melson, who has begun the process of applying to medical schools.

“Science is based on facts, but it is affected by people. And there are no non-biased scientists. Each looks through a certain lens to get the answers they want, so we need a diverse population of researchers looking through many lenses in order to solve the varied aspects of a problem. That way more people can have the best health care.”

So much research years ago was done on white males, but the findings had damaging–sometimes even deadly–consequences for people who were not white males, she says.

“It’s so important to consider race and gender in the course of research. I mean, hormones may be messy, but they make women, women.”

As for her incredible academic career and work in advancing social justice issues on campus, Melson credits a steady stream of “special people” at Lafayette College who befriended, guided, and mentored her.

“Lafayette College has put me in a great place to do great things.”