Lafayette will grant 606 degrees to 590 members of the Class of 2017 during the College’s 182nd Commencement this Saturday. 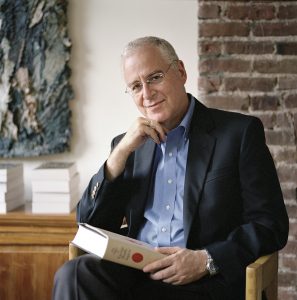 Commencement will feature an address by Ron Chernow, Pulitzer Prize-winning biographer, and include the awarding of four honorary degrees. The ceremony will start at 2:30 p.m., following the academic procession at 2:15 p.m.

The annual Baccalaureate service will be held at 10:30 a.m. the same day, featuring performances and reflections by students and a sermon by the Rev. Alexandra Hendrickson, College chaplain and director of religious and spiritual life.

The Baccalaureate service and Commencement exercises are scheduled to be held on the Quad. In case of rain, one or both ceremonies may be held in Kirby Sports Center. If there is a change in the location of either ceremony based on the weather, that information will be available by calling 610-330-5809.

Valerie Melson ’17, selected by the campus community as the recipient of the George Wharton Pepper Prize, will speak and present the sword of the Marquis de Lafayette to her classmates. The Pepper Prize is awarded annually to the senior “who most nearly represents the Lafayette ideal.” Melson, of Upper Marlboro, Md., will graduate with a Bachelor of Science in neuroscience.

Byerly will congratulate recipients of annual Lafayette awards for distinguished teaching, scholarship, and service to the College and recognize faculty members who are retiring and have been elected to emeritus status. They are Donald Chambers, Walter E. Hanson/KMPG Peat Marwick Professor of Business and Finance; Alan Childs, professor of psychology; Curlee Holton, David M. ’70 and Linda Roth Professor of Art; Neil McElroy, dean of libraries; and Frank Tavani, instructor of athletics and physical education and former football coach.

Edward Ahart ’69, chair of the Board of Trustees, will recognize trustees George Jenkins ’74 and Bruce Maggin ’65, who are retiring from the board and will be elected to emeritus status.

Byerly will confer degrees upon the graduates and deliver farewell remarks. Assisting in presenting diplomas will be Robert Root, clerk of the faculty, and Erica D’Agostino, dean of advising and co-curricular programs.

Ilan Peleg, Charles A. Dana Professor of Government and Law, will lead the academic procession as Bearer of the Mace. The mace is carried by the faculty member senior in the rank of full professor. Paul McLoughlin, dean of students, will marshal the Class of 2017. Provost Abu Rizvi will march at the head of the faculty. Mark Weisburger ’55, trustee emeritus, will lead the trustees and the platform party.