Retiring Lafayette trustees George Jenkins ’74 and Bruce Maggin ’65 have been elected to emeritus status, and their service will be recognized at Saturday’s Commencement. The following biographies are included in the Commencement program: 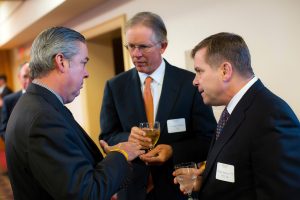 Jenkins’ service as a trustee includes chairing the Committee on Financial Policy, in which role he was a member of the Executive Committee. He was a member of the committees on Compensation, Development and Alumni Affairs, and Information Technology and chaired the Ad Hoc Committee on Investments. He served on the Presidential Working Group on Enrollment Size. Prior to his election to the board, Jenkins was a board associate and member of the President’s Advisory Board and Lafayette Leadership Council.

An economics and business major at Lafayette, Jenkins earned a Master of Business Administration degree in international accounting and finance from Pace University and completed graduate study in mathematics at Stevens Institute of Technology. He is president of Merritt Capital Corporation, St. Davids, Pa. He founded the investment firm, which focuses on private equity and real estate, in 2006.

Jenkins has more than 30 years’ experience in domestic and international banking and venture capital. From 1987 through 2006 he served as general partner and, ultimately, chief operating officer of Apax Partners LLP, an international private equity investment group. A member of the seven-person Worldwide Executive Committee that ran the firm, Jenkins served as senior partner, managing the U.S. business. Major transactions completed by the firm include being an early investor in Apple, AOL, Cadence, and Office Depot and buyouts of Johnny Rockets, Sunglass Hut, Chili’s, Spyder, and Van Heusen.

Before joining Apax Partners, Jenkins was head of the special industries and venture capital business segment at Midlantic Banks for 13 years. Among other accomplishments, he helped launch branches in London and Hong Kong and oversaw their operations.

Jenkins is chairman of the Board of Directors of Flower Orthopedics, a director of Colorescience, Power Survey, and Palvella Therapeutics, and member of the Advisory Board of Hamlin Capital Management. He is founder of Eagles Mere Air Museum, Eagles Mere, Pa., and president of Eagles Mere Historic Village. He is also a member of the President’s Advisory Council at Stevens Institute.

Bruce Maggin ’65 discusses trends in the broadcasting business at a forum with Susan Fox ’88 at the Oechsle Center for Global Education in 2016.

BRUCE MAGGIN, member of the Class of 1965, has served on the Board of Trustees since 2003. He is a member of the Committee on Development, Alumni, and Community Relations. He chaired one of the committee’s predecessor groups, the Committee on External Affairs, from 2009 to 2014, during which time he also served on the Board’s Executive Committee. He also chaired the combined committees of Development and Alumni Relations and External Affairs.

Prior to joining the Board, Maggin was a member of Lafayette Leadership Council, which he chaired in 2001-02, and a board associate. He was a member of the Steering Committee for the New York City Regional portion of Lafayette Leadership Campaign (1995-2001). He later served as chair of the Annual Fund and served as a class fund agent. The Alumni Association presented Maggin with its George T. Woodring 1919 Volunteer of the Year Award in 2002.

Maggin and his wife, Jackie, are founders of the College’s Creative and Performing Arts Scholars Program, which provides financial support to help students develop their interests and talents in the arts through special projects, internships, research, study abroad, and other activities. The Maggins are parents of Daniel Maggin ’02.

A government and law major at Lafayette, Maggin holds Master of Business Administration and Juris Doctor degrees from Cornell University. He is managing partner of The H.A.M. Media Group, an international investment and advisory firm specializing in the entertainment and communications industries.

Maggin has held senior management positions in virtually every segment of the media and communications industries and has been responsible for creating businesses that have increased entertainment and information alternatives for consumers. Prior to forming H.A.M. Media in 1997, he was executive vice president and head of Capital Cities/ABC Multimedia Group, directing the company’s activities in the nascent digital world. He had previously been responsible for overseeing the company’s start-up and venture business activities, including the creation and development of leading cable program networks Lifetime and ESPN.