Members of the Lafayette community were honored for distinguished teaching, scholarly research, and service to the College at the annual pre-Commencement awards dinner Friday night.

President Alison Byerly, Provost Abu Rizvi, and Edward Ahart ’69, chair of the Board of Trustees, presented awards and citations.

Rizvi announced that three faculty members have been appointed to endowed chairs effective with the next academic year: 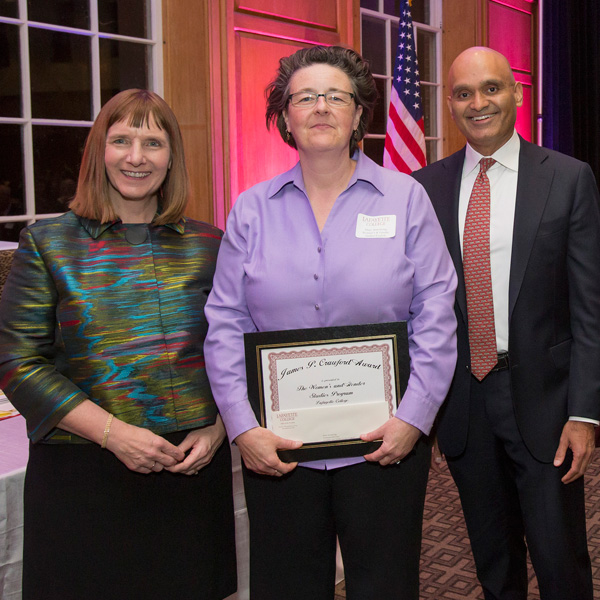 Rizvi also announced that Lindsay Soh, assistant professor of chemical and biomolecular engineering, has been named to a two-year term as the first Kate and Walter A. Scott ’59 Scholar in Engineering.

Byerly recognized retiring members of the faculty who have been or will be elected to emeritus status. They are Donald Chambers, Walter E. Hanson/KMPG Peat Marwick Professor of Business and Finance; Alan Childs, professor of psychology; Curlee Holton, David M. ’70 and Linda Roth Professor of Art; Neil McElroy, dean of libraries; and Frank Tavani, instructor of athletics and physical education, who served as head football coach for 17 years.

Seven faculty members and two administrators were honored for 25 years of service to Lafayette:

The evening featured the awarding of prizes in recognition of exceptional teaching, scholarship, and service to Lafayette. The awards are funded through designated gifts to the endowment.

Michael Kelly, associate professor of economics, is the recipient of the James E. Lennertz Prize for Exceptional Teaching and Mentoring. Established by Leslie F. Muhlfelder ’81, the College’s vice president for human resources and general counsel, the award honors Lennertz for his exceptional teaching, devotion to students, and extraordinary ability to challenge students to realize their full intellectual potential.

Lawrence Malinconico, associate professor of geology and environmental geosciences, is the recipient of the Delta Upsilon Distinguished Mentoring and Teaching Award.  Established in 2000 by alumni of the Lafayette chapter of Delta Upsilon fraternity, the award recognizes distinctive and extraordinary teaching through mentoring.

The women’s and gender studies program received the James P. Crawford Award for demonstrating a high standard of classroom instruction. Established by Jonathan Bernon ’84, the award honors the late James Crawford, who taught in the Department of Mathematics from 1957 to 2003.

The B. Vincent Viscomi Engineering Prize for Excellence in Mentoring and Teaching was awarded to Steven Nesbit, professor of mechanical engineering. Viscomi, Simon Cameron Long Professor Emeritus of Civil and Environmental Engineering, taught at the College for 41 years, including 14 as head of civil engineering.

Shulman received the Thomas Roy and Lura Forrest Jones Award for superior teaching and scholarly contributions to a discipline.

The Faculty Award for Excellence in Community Engagement Pedagogy went to Andrea Smith, professor of anthropology and sociology.

The Faculty Award for Distinguished Leadership in Community-Based Teaching and Research was given to Malinconico and Christopher Ruebeck, associate professor of economics.

Paul McLoughlin, dean of students, received the Cyrus S. Fleck Jr. ’52 Administrator of the Year Award in recognition of outstanding contributions to the campus community. Cy Fleck, for whom the award, instituted in 2002, is named, served Lafayette as an administrator for more than four decades, including 32 years as registrar.

Stephanie Hayes ’94, executive director of campaign and development operations, is the recipient of the Gary A. Evans Administrative Prize, presented to an administrator or staff member who has provided a high level of service to the College, its alumni, or students over a substantial period of time. The award was established by an alumnus in tribute to the extraordinary service of Gary A. Evans ’57 to Lafayette over more than three decades, including positions as director of admissions, vice president for college relations and development, and executive assistant to the president.

Cindy Oaks Linville ’80 received the Daniel H. Weiss Award for Leadership and Vision. Established by Michael LeWitt ’70 and Lynne LeWitt P’13, the award is presented annually to a Lafayette-related individual or group of individuals who have demonstrated leadership and vision.

The recipients of the Distinguished Service Award, which recognizes sustained, distinguished performance by members of the support staff, plant operations, public safety, and administrative staff, are Jeffrey Dorsey, grounds, Facilities Operations; Donna Kneule, director of design services; Tami Kurzeja, technical services specialist in Skillman Library; and John Leone, associate director of major gifts. Leone and Kneule received their awards this evening. Dorsey and Kurzeja will be acknowledged at events later in the year.

Matt Bayly, director of sports medicine and head athletic trainer, received the Maroon Club Athletic Staff Achievement Award. The award is given to a full-time athletics department staff member who has demonstrated outstanding service to the College and its athletics program.

Jennifer Kelly, director of the arts and associate professor of music, received the Daniel L. Golden ’34 Faculty Service Award in recognition of distinguished service to Lafayette through the Alumni Association and alumni activities.

Seven faculty members received Joseph Johnson Hardy Memorial Fund Awards. The award was established in 1923 by Harry S. Gay 1882 in memory of Professor Hardy, who taught mathematics and astronomy at Lafayette from 1870 to 1915. The income from this fund is divided annually among the members of the faculty who have achieved the longest continuous service to Lafayette without regard to rank. Honored were: