Photos and story by Bill Landauer

Pablo Pollish’s brush slips from his hand and adds a streak of fire to the canvas.

Breathing an expletive, he lowers the headphones playing his 1990s hip-hop and examines the errant line. Late afternoon sun pours in hot through windows behind him in the Williams Visual Arts Building, illuminating orange and red arcs that wheel like birds across the white surface.

It’s another needle in the mammoth haystack Pollish is trying to disassemble. He spends hours every day in the second floor studio on his search, sweating over canvases with brushes, paints, and power tools. Some days are successful—Pollish and Clapp Professor of Art Ed Kerns recognize he’s captured an emotion, or successfully transmitted one to someone viewing the painting, anyway. Some days aren’t so great. A couple years ago, Pollish took some time off school and moved home to Connecticut when thoughts and feelings he must navigate to ply his chosen profession got to be too much.

It’s a search. Pollish is looking for something. He can’t tell you what it looks like, smells like, or tastes like, but when he’s close to it he feels a joy he can’t quite describe. Maybe one day he’ll be able to paint it. 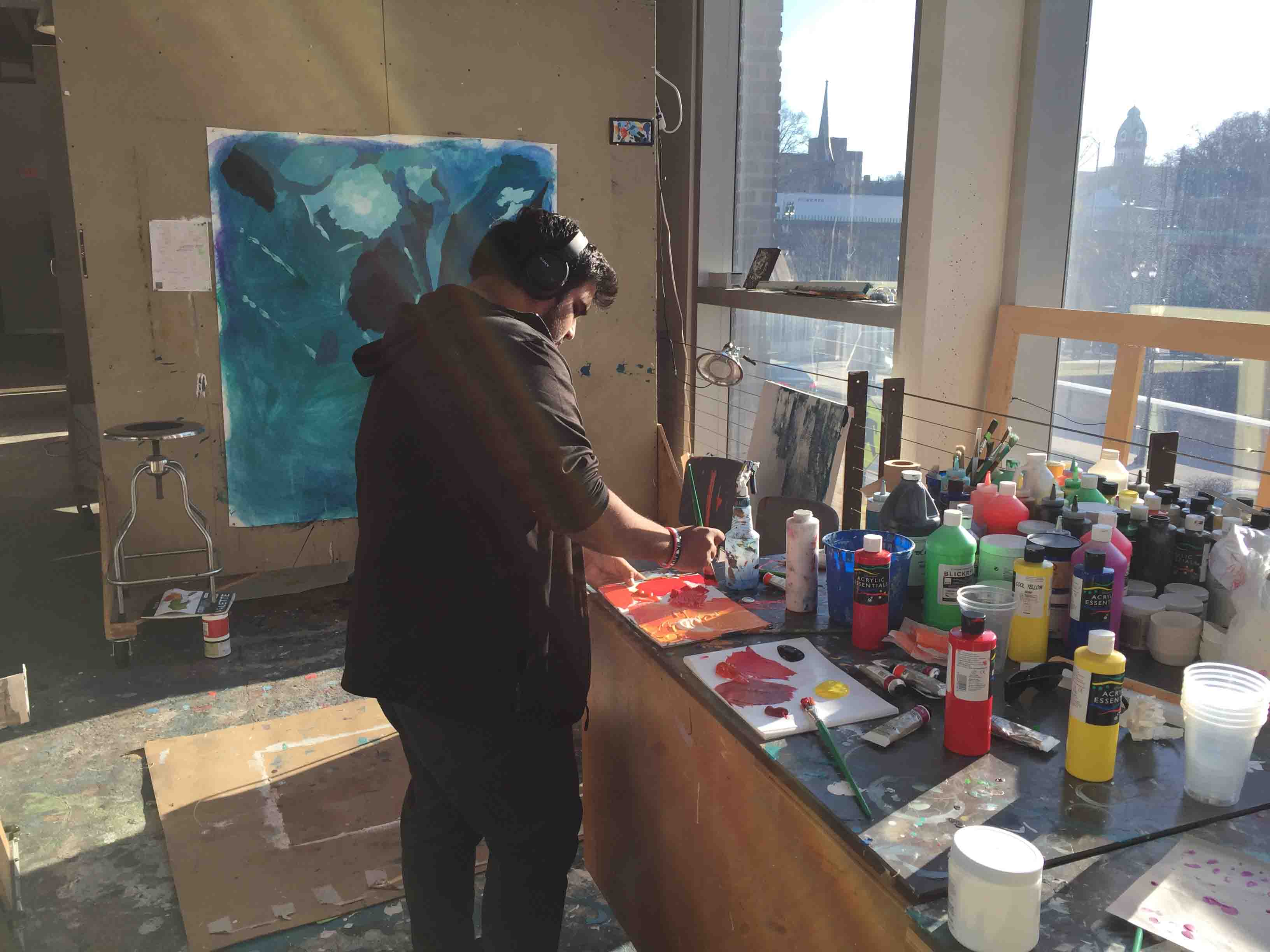 Like several of the other students sculpting, drawing, and painting around him, Pollish isn’t a budding scientist or engineer looking to broaden his horizons. When he graduates in the fall, Pollish plans to keep painting, attend graduate school, and make his living as a working artist.

In April, Pollish will host his first solo show. Visitors will examine his art—only Pollish’s art—and possibly buy some of it. It’s a step Kerns is encouraging him to take. The job of living as a professional artist is starting to take shape.

“I’m trying to keep my nervousness in check,” he says.

Pollish was born in Santiago, Chile, and his adoptive family moved to the U.S. after he turned 4 years old. He’s visited since then, but the Chile of his childhood exists only in colors. His family had a terrace. Pollish remembers explosions of oranges and pinks at twilight with hang gliders swooping through them across the horizon.

He’s never attempted to capture it on canvas. As someone who works to transfer emotions to abstract, tangible forms, the painter keeps a tight inventory on his various memory compartments. Chile recollections are stored behind a door he doesn’t yet feel comfortable opening.

“I blocked it out,” Pollish says. He returned to his work on the second floor of Williams. One day, two years later, “it just exploded,” he says. He poured the emotion into a painting.

Usually, it doesn’t work like that. An idea appears. Pollish writes it down—the size, shapes, and colors. Then, when he sets to work, the emotion of the piece is what he’s carrying in the moment.

Ideas have been flowing since he was in sixth grade. He experimented in his high school art classes, dabbling in charcoal drawings and photography. 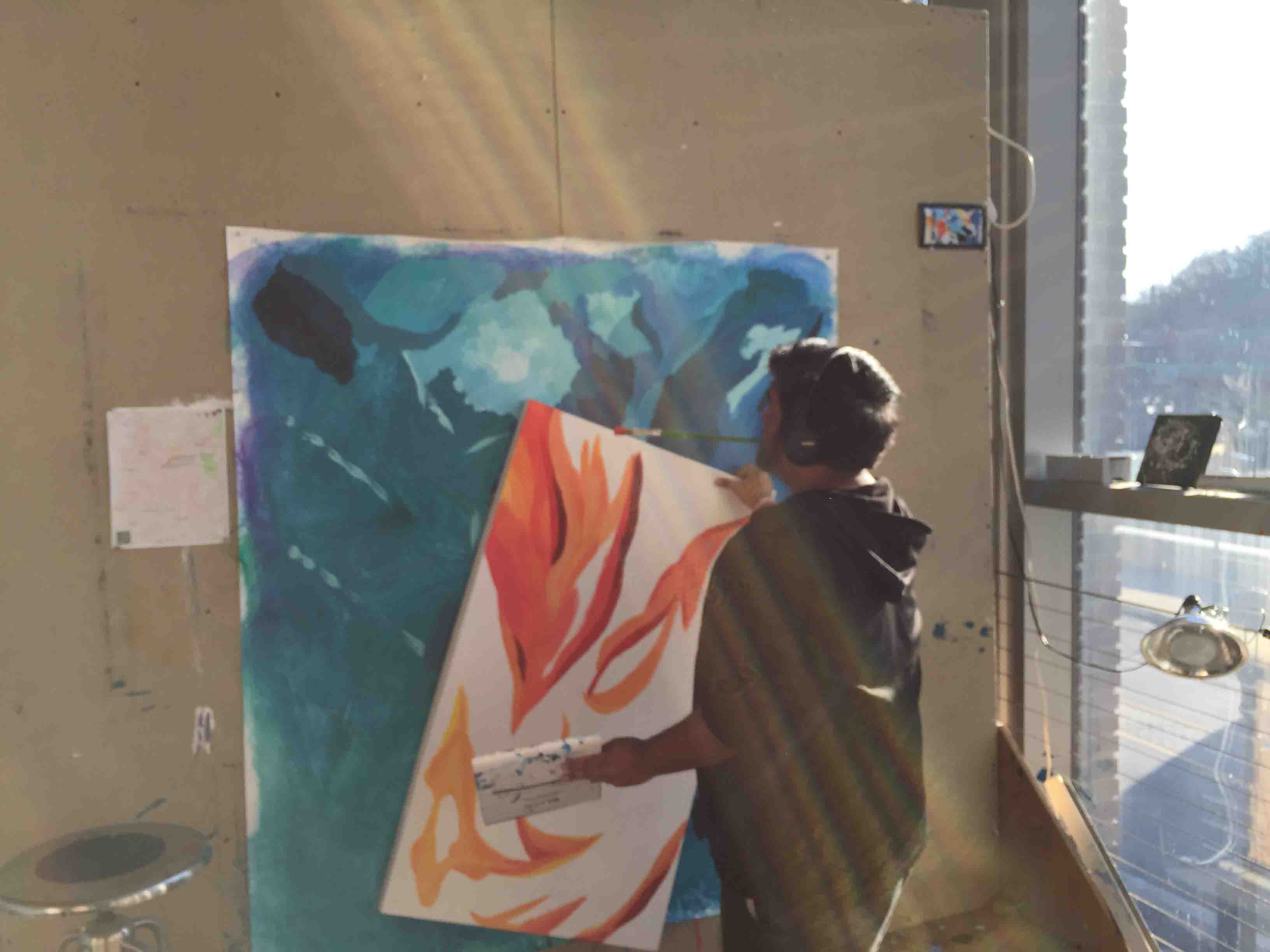 Lafayette gave him the chance to experiment further. His first semester, he tried his hand at sculpture and attempted various ideas with paint on canvas.

Second semester, Beginning Painting with Kerns proved to be the catalyst for which Pollish had been searching. Like it has with many students over the years, the way the longtime professor processed his own ideas clicked with the young artist.

Kerns helped guide Pollish’s evolution. “He’s gone from being sort of interested in the arts and sort of throwing around paint without any particular intention … to wanting to be a professional,” Kerns says. “And when a student wants to do that they become more serious about the nature of structure and what they’re trying to do with a painting. That’s what he’s done.”

Pollish gets up every day at 5 a.m. and heads for his corner of the Williams Visual Arts Building, where he has four or five projects going at once. He’s usually in and out until 10 p.m., often long after everyone else has packed up and the day has exchanged the wash of sun from the windows for streetlights.

Sometimes, Pollish realizes a painting isn’t working, but he enjoys the texture he’s created, so he paints the canvas white and begins fresh on that surface. 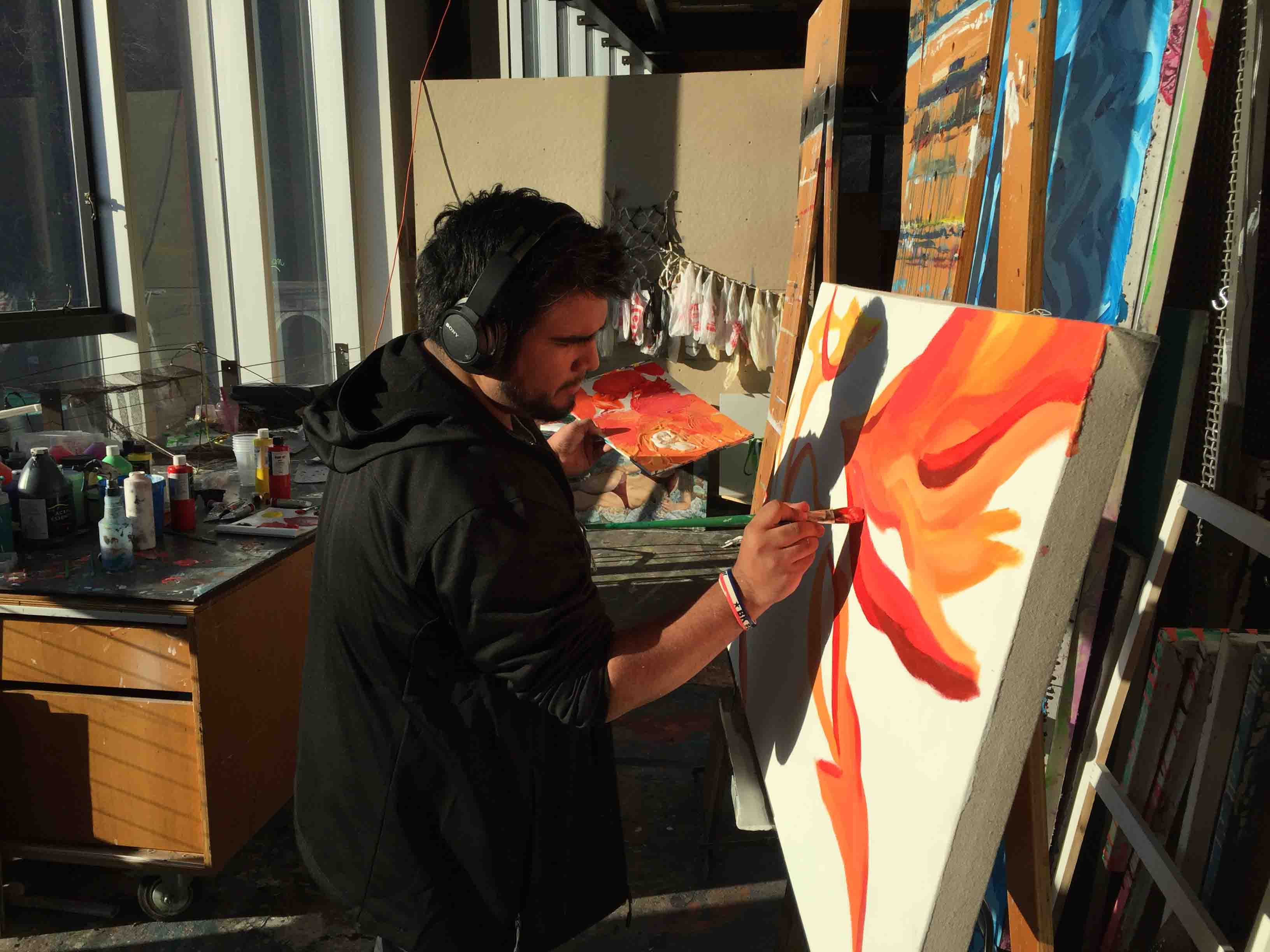 Recently, he’d been working with dots, adding the small circular shapes to canvas or applying a power drill to them on a canvas to give them a new dimension. Dots, lines, colors, and shapes are not by themselves particularly interesting, Kerns says. Rather, they’re tools to effect systems within a painting that create meaning in a work.

“The wisdom of painting,” Kerns says, “is the physical relationship to the meaning found in the material.”

That’s the gig, Pollish says. That’s what he plans to continue to study in graduate school, why one day he’ll access his memories from Chile.

“I don’t even know what I’m really looking for,” Pollish admits. “I know that there’s something. It’s like that voice I have that I can’t really express in words. I’m not a writer, I’m not a poet. … If they see how angry I was, or sad, and they can relate to that, I’ve achieved my goal.”