Ed Kerns runs his fingers over the four edges of a rectangle of watercolor paper.

“I used to have a teacher,” the Clapp Professor of Art tells students gathered around him, “who would say the first four lines in any painting are these. And that’s true because that dynamic proportion dictates to some extent how you set up things inside.”

On this first day of Kerns’ Beginning Painting class, the longtime Lafayette professor is setting up those first lines for 20 or so students. The class is tailored to teach someone who has never picked up a brush before how to transform colors, lines, and shapes on a surface into art. For a few of Kerns’ students, it’s not much of a stretch—they’re art majors. Others are learning to be engineers, biologists, or physicists, and the acres of canvases, brushes, and frames at  Williams Visual Arts Building are another planet. 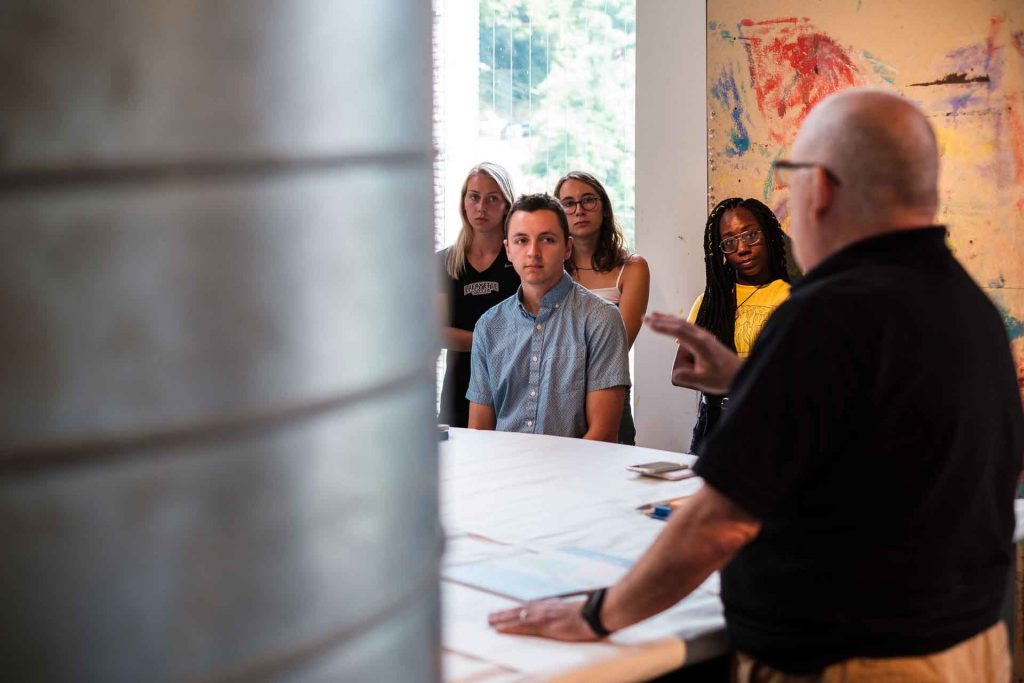 No matter their major, the students will have 24-7 access to Lafayette’s state-of-the-art visual arts studio and all its materials to create whenever the mood strikes.

An annual rite of fall for more than a century and a half, the first day of classes for hundreds of Lafayette students was Monday. Over the weekend, moving vans filled the roads encircling the Quad, and students began to crisscross pathways and fill classrooms that sat waiting for three months.

For many, the first day of class is a shove out of a comfort zone. Nerve-wracking? In a good way. Expectation challenging? Definitely.

Students in Kerns’ Beginning Painting class discover quickly that they’re not simply going to learn about painting. A pedigreed artist whose nearly half century’s worth of work has appeared in galleries in New York, Washington, France, and Italy, Kerns studies more than canvases. He devours books on neuroscience, studies biology and physics. For a working artist like Kerns, painting is more than a spot of color on a dour wall—it travels hand-in-hand with science and philosophy.

On this first day, the lesson is about watercolors. 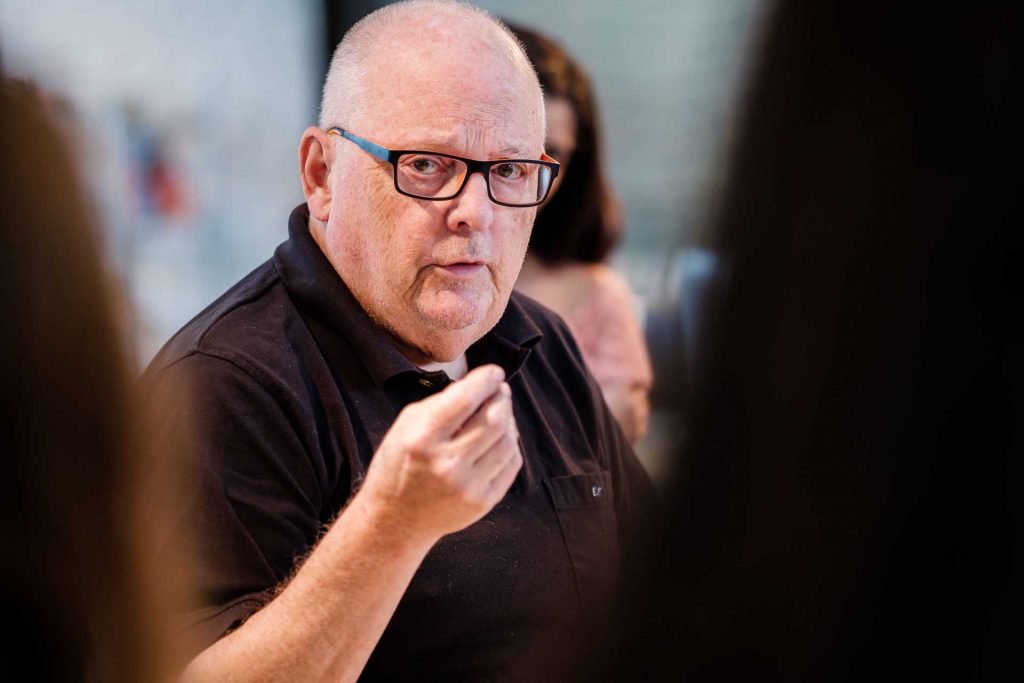 “This big old stupid paintbrush,” Kerns says to his huddled class as he grips what looks like the kind of implement you might use to paint a barn door. He soaks it in a can of water and dips it into purple, green, blue watercolor paint globbed on a pallet.

He swirls it around the sopping rectangle of watercolor paper. Colors ooze and flow and tumble over one another in the frame, creating new colors.

“Now if I tried to render that,” he says, “I wouldn’t be able to do it. But I found that the process of water moving, which in nature is similar to how the atmosphere moves, I can make and orient the beautiful first layer of the sky.”

Art is physical, Kerns tells his students on the first day. Not only does seeing an object fire off chemical reactions in 30 or more spots in the brain, the project itself evolves from the natural world. Kerns spoke of his personal connection with the famous artist Jackson Pollock, who died when Kerns was 12 years old.

“I was influenced by how material meant something to him,” he tells them. 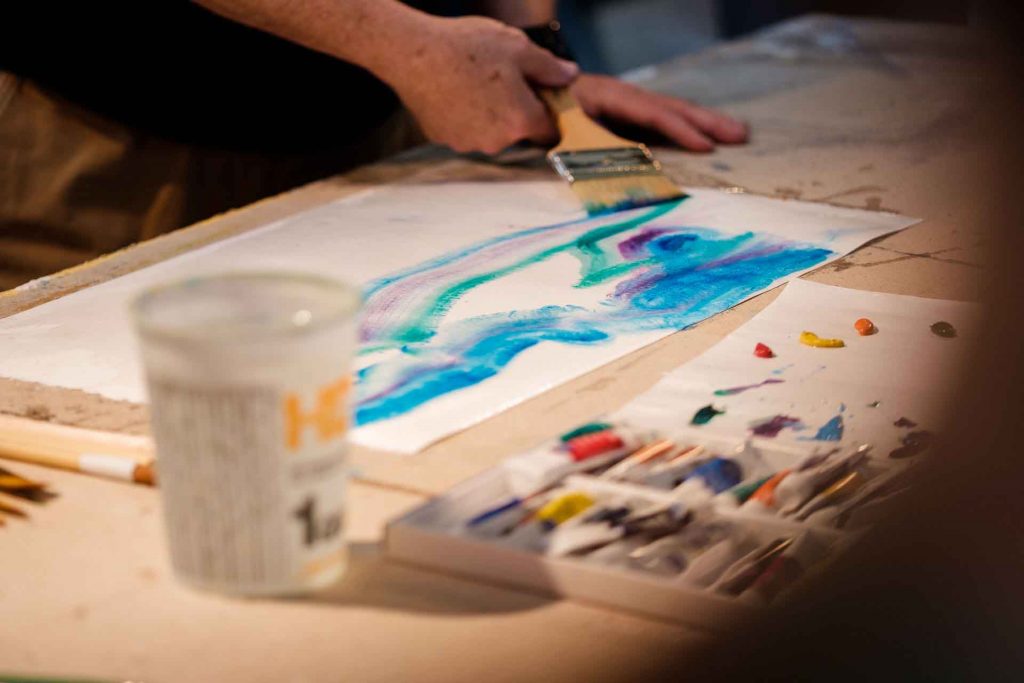 Day one of Beginning Painting takes the class on a tour of where students will work. Kerns seats them all around his office and shows them a slideshow of Winslow Homer works. After his demonstration with the watercolors, you can almost feel how Homer painted them.

Their first assignment will be to create a landscape that includes a number of specific qualities.

Ethan Garvey ’19 isn’t sure what he’ll do. The Schuylkill Haven physics major and art minor has taken plenty of art classes. Most have been art history. “I’m not pursuing it as a career,” he says. “I just love art.”

This is his first studio class in Williams Visual Arts Building. He’d spent a portion of his morning at his first class, Thermal Physics.

“This is quite different,” Garvey says.

But, as Kerns pointed out, maybe physics and painting have more in common than it seems. 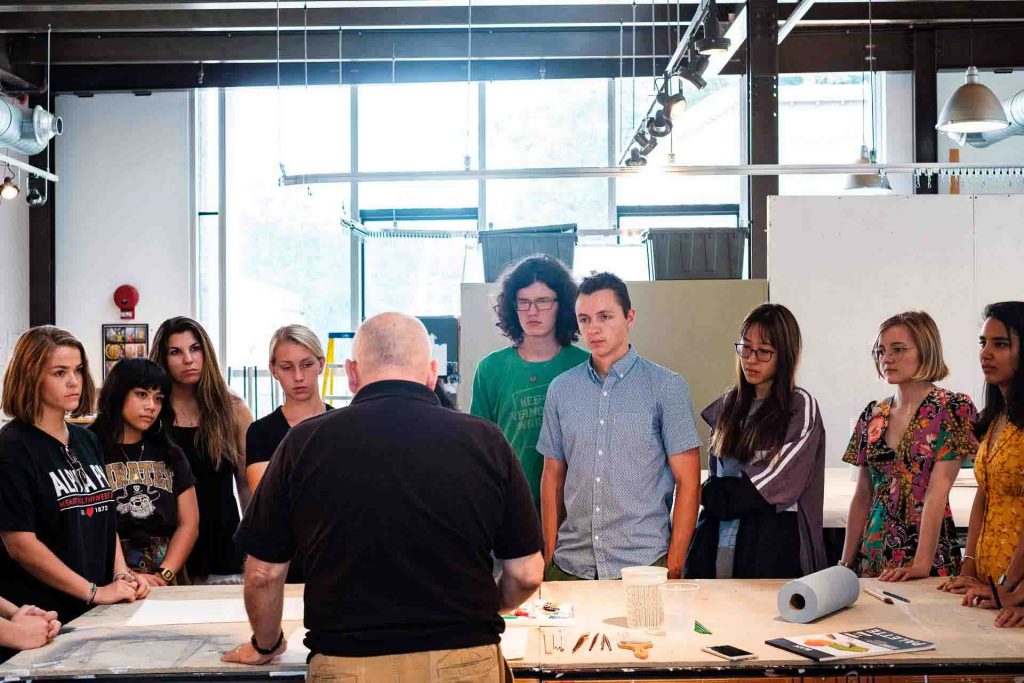