Green lights, angling toward a vanishing point, dot the stage like a series of city high-rises. A lone figure walks out. A blast of fog emanates from the floor. With the touch of his hand, music begins—a whole note sustained for several bars until a drum machine pounds out a beat. And then, the crisp rip of synthesizers rises above the groove. 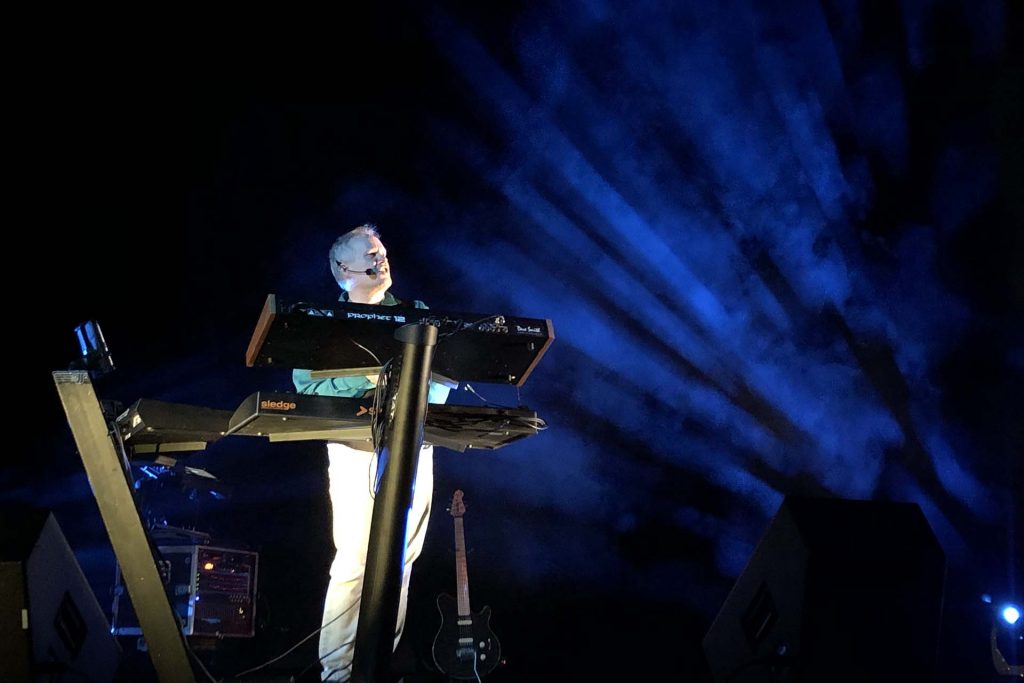 Kirk O’Riordan, associate professor of music, fell in love with synth-pop bands, like Depeche Mode and New Order, as an eighth-grader.

“Pop music helped me with my aural skills as I listened to music and figured out the notes and chord progressions,” he says. “It helped me begin my understanding of harmony.”

However, he still has a love/hate relationship with pop.

“I don’t teach it, but I also don’t want to dismiss it,” he says. “I use the skills I picked up as a teenager every day in my teaching. Of course, those skills were refined over the years as I worked with great teachers.”

But jamming out to his own ’80s-inspired synthesizer music is something he’s wanted to do for years. While he played a few faithful covers of some ’80s hits, most of the music was from his 2018 release, Superconductor, an album of classically inspired pop music for synthesizers.

His idea was to take all that he has learned as a classical composer and put it in pop styles.

“I blend features from the ’80s era along with a Philip Glass style of minimalism,” he says. “The lines were more keyboard friendly, something more angular and aggressive than for solo piano. One of the songs on the album is 12-tone.”

This exercise of seeing what he could do with the music style was coupled with some new post-production recording techniques.

“I am conversant in recording technology, so I composed, orchestrated, and recorded this album quickly, but it took a long time to polish as I sat at the computer mixing, balancing, and fading,” he says.

He spent many hours at the mixing board, refining the sound in order to learn how to use this technology for his more regular compositional practice.

“It satisfied my internal needs as an ’80s aficionado,” he says. “Yet this album and concert is way out of my wheelhouse. I teach composition and conduct. I am a hardcore abstractionist and very proud of my concert music and the compositional pieces I wrote for my wife (concert pianist Holly Roadfeldt,visiting part-time instructor of music) and an opera I wrote with Lee Upton.”

“This pop concert is one aspect of what I like personally, but I’d hate for people to only know this side of my work,” he says. “Popular music is not really designed to challenge listeners, so I wanted to expand what pop could do and put my spin on it.”

It was clear he loves talking, making, and performing the pop stuff, but the point of the concert was for him to learn, to develop his programming and production skills so that he could write better original music.

“I have to continue to improve my own skills. If I don’t, I can’t really ask my students to improve their skills,” he says. 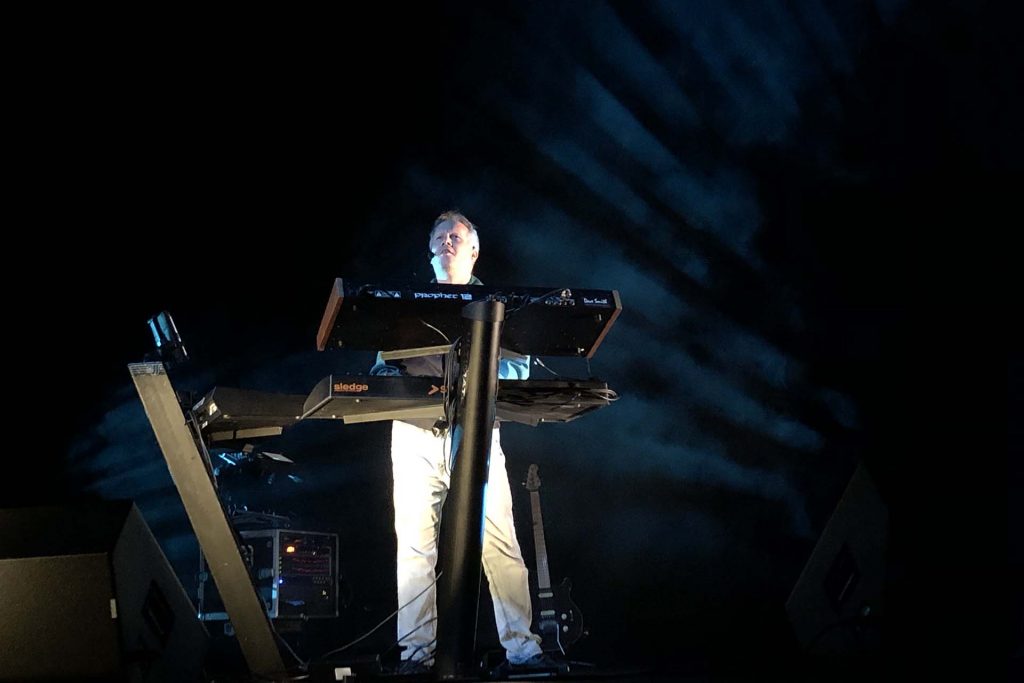 So taking the risk was essential to him.

“Failure is a great teacher. I want my students to see me trying something that can break and fail,” he says. “This is me leading by example so they can see what this experience brings and challenge themselves to take risks.”

He took risks, singing essential ’80s songs with one finger pointing in the air. Red lights, patterned like a brain, stretched their neurons around the performance space as he played.

“Every aspect of this performance demanded my preparation, commitment, and focus,” he says.

That commitment was loud and clear.