In the relentless pursuit of her goals, Pepper Prize winner Joslyn Brodfuehrer ’20 is a fountain of inspiration for her community Twitter

“Brodfuehrers don’t get B’s.” It was a little white lie Joslyn Brodfuehrer ’20 was told by her father—a Marine veteran—when she was a child that inspired her lifelong pursuit of academic perfection.

“I’m the only one of my siblings who never realized that wasn’t a real rule. I’ve never gotten a B in my life,” says Brodfuehrer, who has a double major in international affairs and government & law, as well as a minor in Spanish. “My dad had a really high standard for success, and he made me believe I could do it. But it goes way beyond my parents now. My grades are my biggest matter of pride, and I don’t do it for anyone else but myself.”

Adopting her dad’s empowering words as her personal mantra has truly paid off for Brodfuehrer, who not only maintained a 4.0 GPA throughout her studies at Lafayette, but also was named the George Wharton Pepper Prize winner for the Class of 2020.

But the Pepper Prize isn’t just about rewarding academic prowess. It’s also about recognizing a well-rounded and deeply engaged member of the College’s community. Brodfuehrer’s commitment and achievements as a scholar, athlete, and volunteer have demonstrated that she is the true embodiment of the “Lafayette ideal.”

Brodfuehrer, who is graduating a year early, took advantage of her time at Lafayette to positively impact every facet of campus life she was a part of. In addition to being a member of the women’s lacrosse team and Alpha Phi sorority, she assisted with faculty research as an EXCEL Scholar and served as a volunteer through organizations like Athletes C.A.R.E. and Easton Children’s Home.

“Lafayette is a unique place that lets you do so many things,” she says, “and so I spread my roots and branches in many different places on campus. And that’s what I think Pepper Prize is: striving for success everywhere you are. And that might look different for everyone. You have to be able to define it for yourself. For me, I created my persona around those three different platforms: athletics, academics, and community service. I wanted to make my mark on as many communities as I could.”

Brodfuehrer never had her heart set on a “dream college.” As a middle-schooler, she wasn’t sure where she wanted to eventually apply for her undergraduate studies. But what she did know was that she wanted to attend a college where she could not only academically challenge herself, but also play women’s lacrosse.

An athlete from the very start, Brodfuehrer was a competitive gymnast until seventh grade, when she took up cross-country, track, and lacrosse, now her sport of choice. Her passion for athletics was sparked early in life by her father and mother, who encouraged her athletic abilities and helped her perfect her techniques at home. 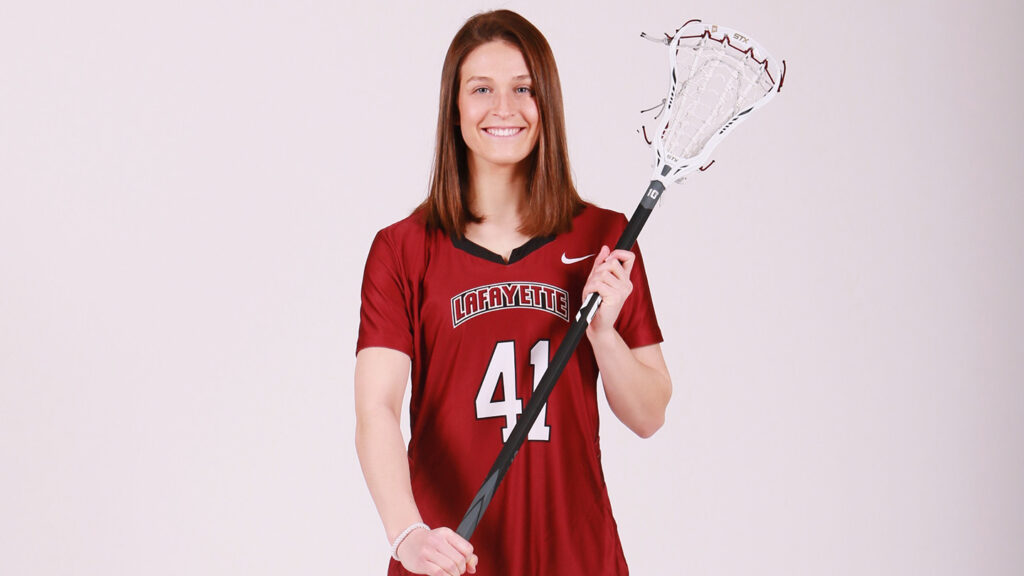 “I remember my dad picked me up from practice one day and was like, ‘I can’t believe those pushups you guys are doing.’ And he brought me home and taught me how to do a military pushup.”

Being that she has family ties to the Easton area—her great-grandmother worked at the Simon Silk Mill, and her grandparents were born there—Brodfuehrer found herself visiting the area during the summers of her youth to spend time with her grandmother and grandfather. Because her family moved frequently between military bases in North Carolina and Maryland, she came to view Easton as her “home away from home”—and it was there she was introduced to Lafayette.

“I was visiting my grandma the summer after eighth grade, and there happened to be a Lafayette lacrosse clinic,” Brodfuehrer says. “And my mom was like, ‘I’m sorry, but you have to go. Recruiting starts now.’ And I went, even though I didn’t want to go at all, and I was the youngest one there. The next summer, I went to the clinic again and played the best lacrosse of my life. I also took an academic tour of Lafayette [that summer], and I absolutely fell in love. I thought, ‘This is my school.’”

Soon after her tour, Brodfuehrer received a call from then-head women’s lacrosse coach, Alison Fisher, who offered her a position on the team. Remembering the words of her great-grandmother, “Anyone who’s someone goes to Lafayette,” Brodfuehrer knew she had found her place.

Although she was not a starting player, Brodfuehrer used her time as a Division I athlete at Lafayette to serve as a positive driving force for her teammates.

“My favorite thing about her is her selflessness,” says Kathleen McConnell, current women’s lacrosse head coach. “Josie puts her teammates’ success above her own, and she is always happy to see her teammates succeed.”

“As an athlete, for me, success was about pushing my teammates to be better,” adds Brodfuehrer. “I encouraged them at practice. I wrote self-love quotes for all the attack starters. I helped my teammates plan their schedules so they could get the most out of their academics and athletics. I tutored them in Spanish. I wanted to be a good role model and have the best kind of influence that I could, because being a student-athlete is really tough. We give a hell of an effort to be able to hang in there with school, because we have way more of a time deficit because of our hours out on the field every day.”

Despite having to work around heavy time constraints during lacrosse season, Brodfuehrer flourished in her studies as well—not only achieving perfect grades in all her courses, but also obtaining an international affairs and government & law dual degree, and a Spanish minor, in just three years. How did she do it? With the help of a spreadsheet she created in her first year, which she used to plot all of her courses through graduation.

“I’m a huge planner,” she says. “The minute I heard about a final paper at the beginning of the semester, I would start researching it right away. I get assignments done three to four weeks in advance because that’s just how I operate. I’ve found that by working ahead, I was able to mitigate a lot of my stress, because my stress personally comes from when I feel like I don’t have enough time to do something.”

Brodfuehrer challenged herself academically outside of the classroom as well. As an EXCEL Scholar, she assisted Charles A. Dana Professor of Government & Law Ilan Peleg—whom Brodfuehrer esteems as her mentor—in his research on Benjamin Netanyahu, prime minister of Israel. Her close interactions with professors—and Peleg in particular—were, according to Brodfuehrer, one of her biggest keys to her academic success.

“Professor Peleg is a big reason why I won the Pepper Prize, and why I am the student I am today,” Brodfuehrer says. “He’s been so supportive of everything I’ve ever done, and I owe a lot of my success to his influence in my life. I’m so grateful for him.”

“Josie is totally committed to her rigorous studies, and she is the type of student that all professors like,” Peleg adds. “Although she was a member of an overall impressive class of students, she stood out.” 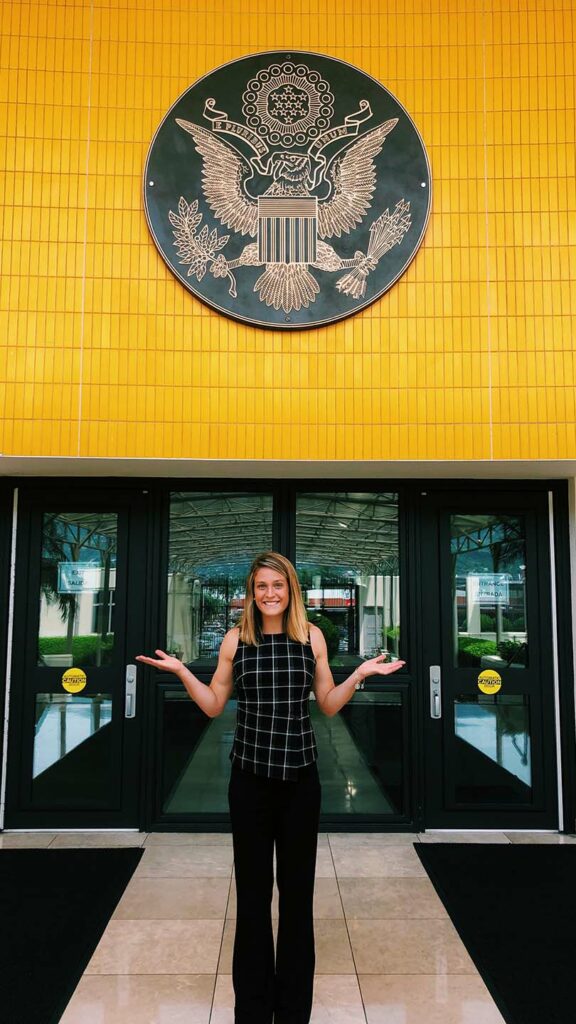 Joslyn Brodfuehrer ’20 interned with the Department of State at the U.S. Embassy in San José, Costa Rica.

According to Brodfuehrer, Peleg was also instrumental in her acquiring an internship last summer with the Department of State at the U.S. Embassy in San José, Costa Rica. There, she spent 10 weeks working with departments such as the International Narcotics and Law Enforcement Bureau, interviewing department heads, attending various events, and cultivating her Spanish language skills. The experience, Brodfuehrer says, solidified her desire to pursue a career in international affairs—possibly with Central Intelligence Agency (CIA)—post-graduate school.

“It was, hands down, the best experience of my life,” she says. “It made me recognize that I’m a global citizen. And because my dad was in the military and I love my country, I would love to serve my country like my dad did, but in my own way.”

But first, in October, Brodfuehrer will be heading to University of Cambridge in England, where she will pursue a master’s degree in politics and international studies.

“As a lacrosse player, I wasn’t able to study abroad,” she says, “so I wanted to use my extra year as a way to go abroad and get my graduate education. The program at Cambridge is a one-year program, so I’ll essentially be finishing my master’s in the time that I would have gotten a four-year degree at Lafayette. I’m so excited. This will be my first time in Europe, and I can’t wait for all the new experiences I’ll get to have.”

Whenever she found herself with some downtime between classes and lacrosse practices, Brodfuehrer selflessly dedicated her spare hours to the betterment of her community. Through the nonprofit organization Athletes C.A.R.E.—which engages young athletes to provide food, clothing, necessities, and compassion to the needy—she tutored students at Wilson Area Intermediate School, and helped them with their homework assignments, several times a week.

In addition, together with her lacrosse teammates—and in partnership with Lafayette’s Landis Center for Community Engagement—Brodfuehrer visited various elementary schools in the Easton area to play sports with children in the after-school program. And because her mother is an elementary school teacher, Brodfuehrer often took it upon herself to visit her mother’s classroom, work with students in need of individual attention, spend time with the children during lunch and recess, and help teachers with tasks like decorating bulletin boards.

“I like to be a mentor and I love working with kids,” she says. “Because community service is something I’m passionate about, I wanted to be able to squeeze it in whenever I could. So, it was a matter of looking over my schedule, seeing where I had an opening or a canceled class, and using that day to volunteer.”

Carrying on her family’s military tradition, Brodfuehrer also held a fundraiser for Toys for Tots—a program run by United States Marine Corps Reserve that distributes toys to children in need—at a Lafayette basketball game during her first year.

“I used to work with Wounded Warriors when I was in middle school, back when I lived in North Carolina, because it was a big military community,” she says. “So, when I came to Lafayette, I wanted to bring a little piece of that here too.

“And because my dad was in the military, for me, coming to Lafayette was kind of like my first concrete home,” Brodfuehrer continues. “It was the first place I chose to live, and it’s such a unique community with so many people, professors, and teammates that I’ve grown to love. It’s a really special place, and I’m really going to be sad to leave it.”

Knowing that the community she loves so much voted for her to receive the Pepper Prize, she says, is her greatest sense of achievement of all. And in true Brodfuehrer fashion, she leaves her peers with these emboldening words:

“We can be anything we want to be, and we can do anything we want to do. Whether it’s athletically, academically, or professionally, you can do it all if you set your mind to it. Figure out what drives you, keep your nose to the grindstone, and everything will fall into place.”