If you’re facing a medical emergency, inquiring about treatment costs is the last thing on your mind.

Later on, you’re shocked by a mailbox full of unexpected and unwelcome invoices from medical professionals you did not have a say in choosing from outside of your health insurance network. Treatment in an emergency room, for example, may include out-of-network lab services and additional care from specialists such as anesthesiologists, radiologists, and pathologists.

Even that piece of buttered toast that tasted so good in the recovery room may be recorded as a bitter unanticipated cost you’ll have to confront at some point. 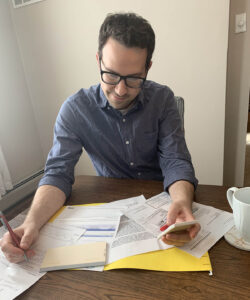 New research by Adam Biener, assistant professor of economics, and a team of colleagues found that patients who likely received a surprise out-of-network bill for emergency physician care paid more than 10 times as much as other emergency patients paid out-of-pocket. It’s the first research of its kind to track how much patients actually paid toward these surprise medical bills.

In emergency department visits where patients likely paid a surprise medical bill, physicians collected 65% of their charged amount compared with 52% in all other cases. The authors of the study concluded that there is considerable scope for consumer protection legislation to reduce patients’ financial burden associated with surprise out-of-network bills.

Their research, which analyzed government survey data from 2001-16 on nonelderly adult patients’ emergency department visits covered by private insurance, is presented in the April issue of Health Affairs, a leading journal of health policy thought and research.

“It happens to many people where they unexpectedly receive surprise medical bills for many hundreds or even thousands of dollars,” says Biener, the principal author of the article whose research focuses on how Americans use and pay for medical care. “The surprise part comes from not knowing about an extra physician or lab bill when you assumed your insurance would cover everything. The reason the bill is large is because that doctor doesn’t have a negotiated payment with your insurance.”

“On average, patients paid $150 toward surprise physician bills, 10 times what they would pay if the doctors were in network.” Biener says. “But we also find that these payments can be as high as $400 or even more, which can represent a significant burden as many households are not prepared for even a $400 surprise medical bill.”

Biener noted that their main contribution was discovering what patients actually paid toward surprise bills, which is lower than the size of the full bill. Even so, their findings likely understate the full cost to patients, as they do not capture payments made more than a year after the emergency department visit or payments to debt collectors.

There is some consumer relief under the Affordable Care Act, which requires primary insurance carriers to pay something toward out-of-network fees.

“But that something could be very low,” he says, adding that some states, including New York and California, have laws that regulate out-of-network billing. But without protections, consumers can often end up handling agonizing payment disputes themselves.

Federal help is on the way.

Biener says the findings that he and his colleagues uncovered demonstrate a need for legislation like the new No Surprises Act. Passed by Congress at the end of 2020, the law, which takes effect next year, will protect consumers from the costs of unanticipated out-of-network medical bills.

He notes that policymakers and Congressional staffers, like those working to implement the new law, routinely turn to Health Affairs for information and may likely take notice of the study as they hammer out details of the legislation.

“What really won over lawmakers were the stories of people being saddled with very high surprise bills that they weren’t prepared for and that they had no reason to expect,” Biener says. “There’s a lot of pain and heartache caused by surprise medical billing. Our research findings reflect those experiences.”

Editor’s note: This article has been referenced in RevCycleIntelligence and InsuranceNewsNet.

The High Costs of Childhood Obesity