Are we being good ancestors? This question, originally posed by polio vaccine pioneer Jonas Salk in 1967, is a difficult but critical question we need to keep asking ourselves, acclaimed nature writer Robert Macfarlane told those attending his recent Hatfield Lecture.

Macfarlane, a Cambridge University environmental humanities fellow, shared insights from his latest and highly celebrated book, Underland: A Deep Time Journey, with the Lafayette College community. In Underland, Macfarlane explores the hidden world beneath the earth’s surface (caves, catacombs, sinkholes, mines) to show the far reaches of human activity. He shared his hope that readers of the book consider the costs of human impact and complacency on the world around them (and under them).

“Think of deep time as something that folds forward as well as kind of beautifully backward, and that we stand with our toes on a brink,” Macfarlane said. “I think that politicians and individuals benefit from asking themselves that question. It’s a hard one to answer. It’s a hard one to live with. And you can’t do it all the time. But keep asking that question: Are we being good ancestors?”

MacFarlane, who was originally scheduled to speak to the Lafayette community on campus in March 2020, spoke virtually from his home in Cambridge, England. The talk, which was part of the Lafayette Libraries’ Hatfield Lecture series and co-sponsored by the Office of Sustainability, capped off the College’s Earth Month celebration. Anne Houston, dean of libraries, welcomed attendees and thanked John L. Hatfield ’67, who has generously endowed the lecture series and was in attendance; Christopher Philips, professor of English, introduced Macfarlane. 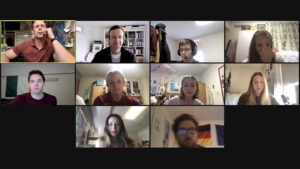 In addition to the lecture, students in Geology 130 had the opportunity to have an intimate small-group conversation with Macfarlane. Associate professor David Sunderlin incorporated Underland into the course’s curriculum as “the class explores how the history of gradual processes, exceptional events, and biotic evolution has shaped our world and, ultimately, us.”

“Reading Macfarlane’s Underland, and then discussing it with the author during our time together in class, really enriched our sense of the ‘why’ of our course,” Sunderlin says. “Why deep time, though ancient and distant, is so enthralling, close, and important in looking toward the future.”

Students were about two-thirds through Underland when Macfarlane joined them via Zoom in late April. Their questions reflected the interdisciplinary nature of his writing and their liberal arts education. Macfarlane shared insights on his use of Greek and Roman mythology, how he combined scientific information with vivid imagery and poetic writing, and how he balanced fear with fascination to explore remote, claustrophobic locations.

“Reading Underland as a ‘textbook’ is extremely refreshing as it contextualizes geology with real-world experiences of geological history,” says Carly Johnson ’24. “As an English major, it helped me to see geology in a new light. This book allowed me to appreciate rocks through the use of imagery, metaphor, and anecdotes.”

“Being able to interact with Robert was such a great experience, and I think the class was very appreciative to get acquainted with the person whose journey we have followed during the second half of this semester,” says Caroline McParland ’23, a biology major and geology minor. “My classmates had a multitude of questions prepared for him, ranging from his experience with the book-writing process itself to specific geological questions in relation to our course content. Reading Underland has allowed me to interpret my learning about the physical components in the earth in GEOL 130, and see them through an inter-connected lens.”

Co-Creating a Better Future, Together