How a passion for family, technology, and helping others sculpted the journey of Pepper Prize winner Basit Balogun ’21 Twitter

There are three things this year’s George Wharton Pepper Prize winner, Basit Balogun ’21, treasures most in life: having a tight bond with his family, helping others, and pursuing his love of technology. The seeds of these values were planted in him from his early childhood days in Lagos, Nigeria—his birthplace—and selflessly and meticulously nurtured by his single mother, Latifat Balogun.

“She had this saying: Whenever you give, you’ll get it back in multitudes,” says Balogun. “My mom was not wealthy at all, but she went through a lot of struggles and made a lot of sacrifices for me to have opportunities and experiences comparable to someone in the upper or middle class. And even though I grew up in a single-parent household, I lived with many different family members. No one ever said, ‘This is my son’ or ‘This is my daughter.’ We were just one family, and that had a huge influence on me.”

Latifat Balogun also noticed early on that her young son was magnetically drawn to technology and had a knack for taking apart and reassembling electronics. So, despite their native culture favoring professional pursuits like medicine, engineering, and law, Balogun’s mom scraped together whatever money she could and invested it in information technology tutorial centers, cellphones, laptops, and any other resources that would give her son hands-on exposure to what he was most passionate about.

The principles his mother and close-knit family sowed in him are what laid the groundwork for Balogun to not only flourish academically and give back to others but to do so despite being faced with a number of imposing challenges—the first of which was his move to the United States during high school to continue his education.

“Being in a new country had its trials, especially with people thinking I didn’t speak English,” Balogun says. “There was colorism in Nigeria, but not necessarily racism, so seeing how people treated each other based on their race was a huge shocker. It was also the first time I was very far away from my family. I was 16, and I wasn’t necessarily ready.”

Like my mom says, if you succeed at anything, you have to make sure everyone else you know succeeds too because that’s the only way you’ll find true joy.

Balogun was able to overcome those hurdles by applying himself to his schoolwork, building relationships with his teachers, and engaging socially with his peers through sports. Yet, there was one thing that still weighed heavily on his mind: How was he going to afford college?

“I knew I needed to get full tuition and aid,” Balogun says, “and being undocumented, there’s a limited number of avenues you are able to go to college through. I worked very hard throughout high school, but finding Lafayette was mostly luck.”

As chance would have it, a friend of Balogun nominated him for the Posse Foundation, a nonprofit that provides students with extraordinary leadership potential full-ride scholarships to partner higher-education institutions. After going through several interview rounds and ultimately receiving the honor, Balogun was given a choice of select colleges to attend.

“I didn’t want to be in New York, but I still wanted to be able to go back,” he says. “Plus, I didn’t really understand what a liberal arts college meant at the time, but the idea of being able to engage beyond what you do in academics and explore different avenues of interest while also pursuing education was something I felt very strongly about. Even though my interest lies in technology and engineering, I also love speaking and engaging with people directly, and I needed to be in a space that would allow me to do that. That’s what drew me to Lafayette. It felt like the right fit for me, and I’m most certainly glad I made that choice.” 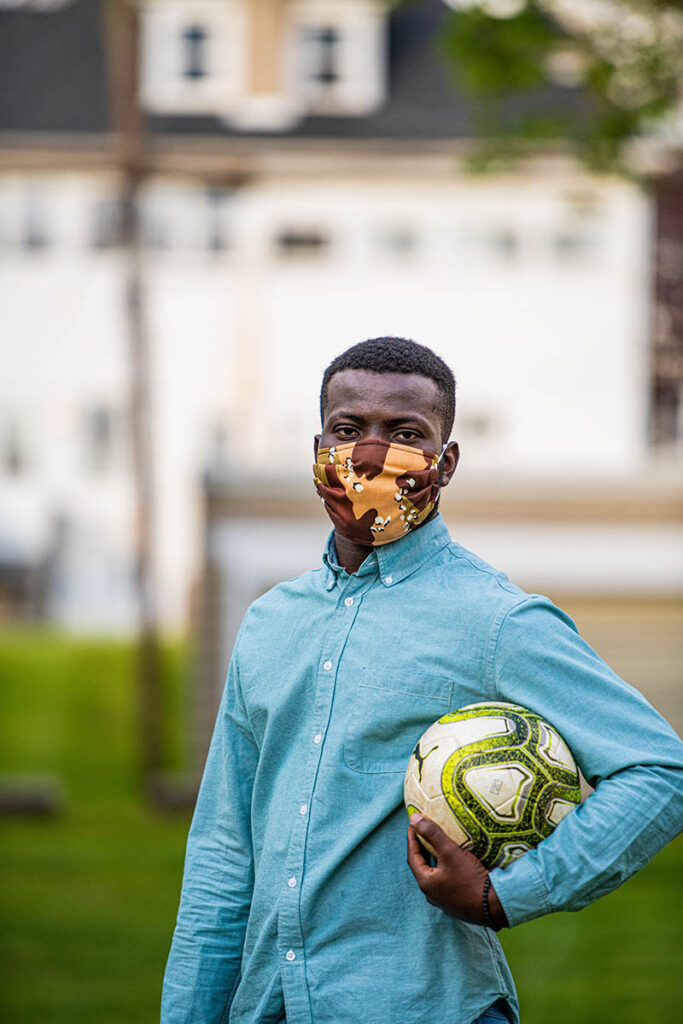 While Balogun knew a Lafayette education was exactly what he wanted, undergoing yet another cultural shift from being a high schooler in the Big Apple to being a college student in rural Pennsylvania didn’t come without difficulty.

“It was even a little more challenging than transitioning from Nigeria to the United States,” he says. “My high school was pretty much all immigrants, and even though I didn’t know any other Nigerian people there, there was this sense of community because we were all immigrants. Coming to Lafayette, where the campus was mostly white, was another shock to me because I wasn’t used to engaging with that type of community. Over the years, I learned that at the end of the day, we all have diverse backgrounds, but fundamentally people are the same—everything else is just a result of environment and upbringing. So, I try to get to know people and understand where they’re coming from, and that helps me understand why people, including myself, are the way they are.”

Even with the added difficulties that came along with being an undocumented immigrant, suffering a heart attack as a first-year, undergoing open heart surgery that left him bedridden for months, and then being blindsided—along with the rest of the world—by the COVID-19 pandemic during his junior year, Balogun refused to let his struggles define him. Instead, he delved even deeper into his academics and served as a deeply committed member in as many Lafayette communities as he could.

“My Posse mentor made us write a note to ourselves in the future,” Balogun says. “In that note, I wrote, ‘Please work hard. You’re going through a lot of challenges. Please just make it.’ I didn’t have this grand plan of achieving greatness. I was just hoping to survive.”

“I don’t like seeing people go through the same struggles that I went through, and it brings me joy knowing that the people around me are excelling as much or even more than I am,” Balogun says. “The struggle that comes with the undocumented student experience—not being able to travel or work, living in fear—is something a lot of people are unaware of. And while Lafayette does provide a lot of support in terms of financial aid, undocumented and other underprivileged students need help outside of tuition, like being able to buy food and books. Like my mom says, if you succeed at anything, you have to make sure everyone else you know succeeds too because that’s the only way you’ll find true joy.”

Additionally, Balogun landed a prestigious internship at Goldman Sachs’ engineering division during his junior year at Lafayette, which was extended to a full-time position offer. He will be joining the company as an engineering analyst after graduation. “I know I will forever be working toward using finance and technology to solve problems and make the world a lot more equitable for everyone,” he says, reflecting on his dreams for the years to come.

These achievements and many more led to Balogun earning the 2021 George Wharton Pepper Prize, an honor awarded annually to the senior who most closely represents the “Lafayette ideal.” Yet, he remains humble, crediting the support of his friends and mentors for his success. Friends like Saeed Malami ’20, who also hails from Nigeria (Balogun and Malami even attended rival schools, though they never met until they came to Lafayette), and Melissa Niles ’21 and Umamah Masum ’21, who Balogun says were his “bedrock” and helped him navigate through emotional and physical hardships; faculty like computer science professors Chun Wai Liew and Joanne Ordille, and economics professor Rose Bukics, who was Balogun’s Posse mentor; and staff members like Alana Klass, senior associate director of Gateway Career Center.

“The Pepper Prize is not something you can get without the support of the community, and there are so many people who have helped me get to where I am today,” Balogun says. “Without them, I just would not have been able to do anything. They made my Lafayette experience what it was. Even though I’ve always worked hard, I understand that a lot of people with the same challenging circumstances that I faced would not have the opportunity to achieve the same things that I have, not because they didn’t work hard, but because they didn’t have the same support I’ve had.”

And while he doesn’t know what obstacles may lie ahead, Balogun hopes that he and his peers in the Class of 2021 can reflect on, and celebrate, their triumphs as the time for them to walk across the stage at commencement draws nearer.

“We went through a pandemic, we went through remote learning—we weren’t prepared for all of that. You can’t really prepare for it. Feel a lot more comfortable with the uncertainty that lies ahead, and take this moment to relax and enjoy the fact that you graduated college in a very uncertain time.”

Campus Life During the Pandemic