Cur Non, the motto of the Marquis de Lafayette, is our rally cry. It means “Why not?,” and it’s within that spirit that students are encouraged to ask themselves, “Why not explore? Why not engage? Why not take risks?”

To celebrate all they have accomplished, we asked the 2021 George Wharton Pepper Prize nominees: When you look back at your time at Lafayette, what has been your most defining “Cur Non” moment? Here are their stories. 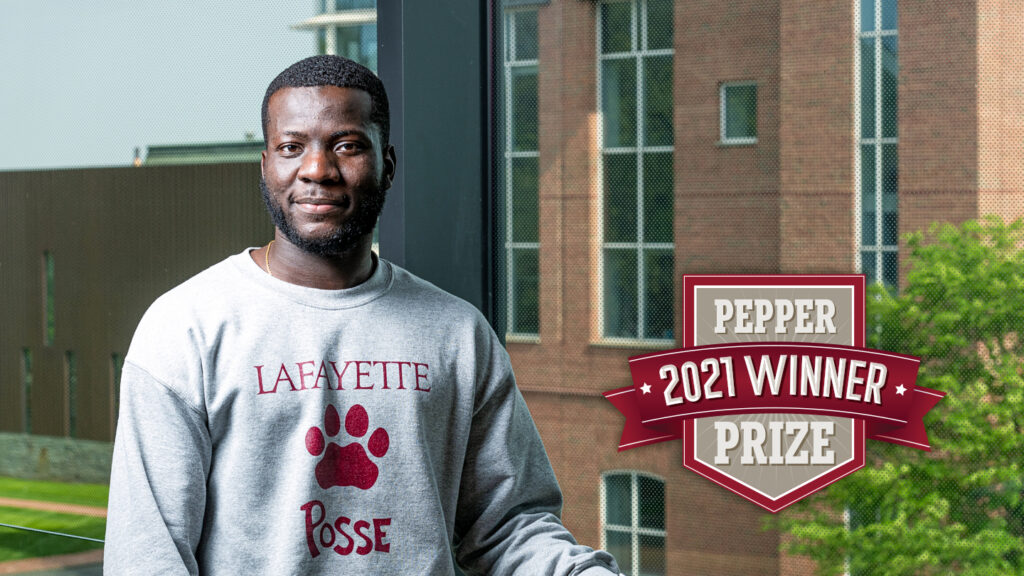 “Due to an unexpected heart attack, I was lying on a hospital bed on the first day of my first spring semester. In the previous semester, I walked around Lafayette feeling like an impostor/second-class citizen owing to being undocumented. And here I was, on the brink of death, having barely interacted with the community at large. At that exact moment, I realized I needed to explore new opportunities, and I began to pursue technologist and entrepreneurial interests. Three years, numerous entrepreneurial, startup, and big corp experiences later with immense support, I have embraced the spirit of thrill-seeking entirely and that has led to my incoming role as an engineering analyst at Goldman Sachs on their Algorithmic Trading team.” —Basit Balogun ’21 (computer science)

Life changed dramatically when campus life came to a halt at the start of the pandemic in 2020. Learn more about how Balogun navigated the challenges and found a sense of normalcy in his work and play. 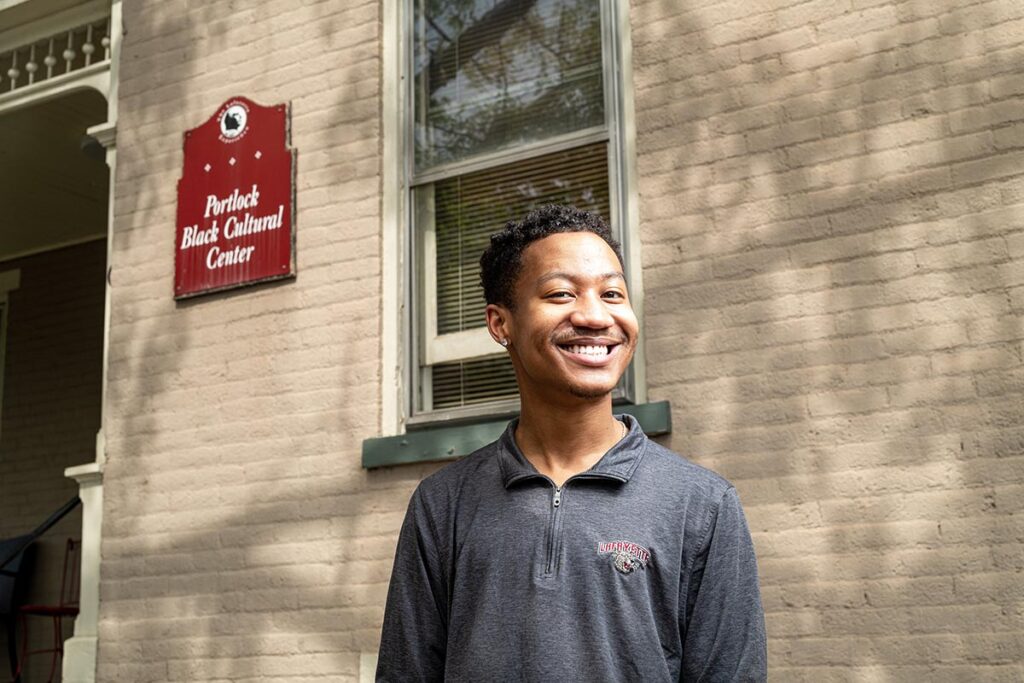 “During my junior year I was elected president of the Association of Black Collegians (ABC). I felt empowered that the Black community recognized my abilities as a leader and trusted me with this legacy. I knew in order to best support the well-being of Black students I had to uplift their voices and experiences on campus. It was a part of my responsibility in making sure before I left office, ABC’s presence would be strong, unapologetic, and reach the Lafayette body as a whole. I think of all the opportunities the College has provided me to benefit my own personal and academic success. Even better, I imagine the power of community and the transformative groundwork that can be done when we show up for each other!” —Tyler Cook ’21 (anthropology and sociology) 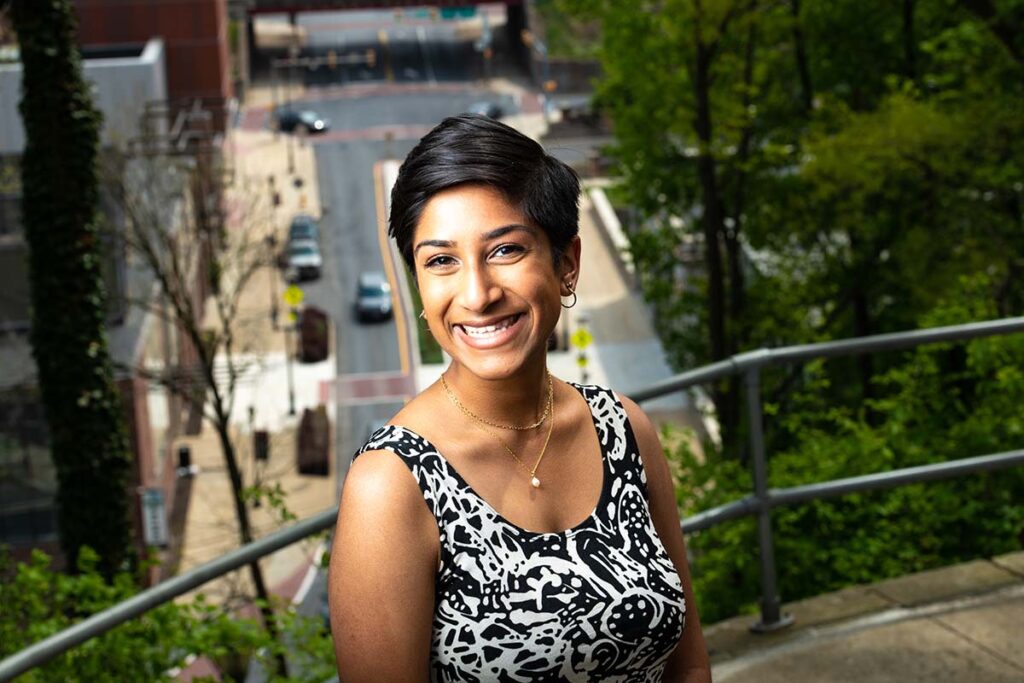 “In a meeting for Alpha Phi Omega during my first semester, I listened to a presentation given by an Easton resident who started a charity event in honor of her son. She was raising funds for childhood cancer research, culminating in a head-shaving event. I turned to my friend, Quinn, and whispered, ‘I think I’m gonna do that.’ He raised his eyebrows and responded with something to the effect of, ‘OK, whatever.’ I participated in support of my aunt, who always wore her bald head with conviction and grace before she passed away of breast cancer. After months of dedicated fundraising, I sat in Kirby amongst many big, strong, manly athletes and had my head shaved. The moment was awe-inspiring: I was surrounded by a handful of friends, but mostly strangers at the time, coming together in solidarity with energy and compassion to support a cause that has impacted the lives of so many.” —Alisha Gangadharan ’21 (history/ international affairs)

Gangadharan was recently recognized by the Landis Center for Community Engagement, receiving the Class of ’97 Community Service Award and was previously recognized as a Landis Active Citizen. 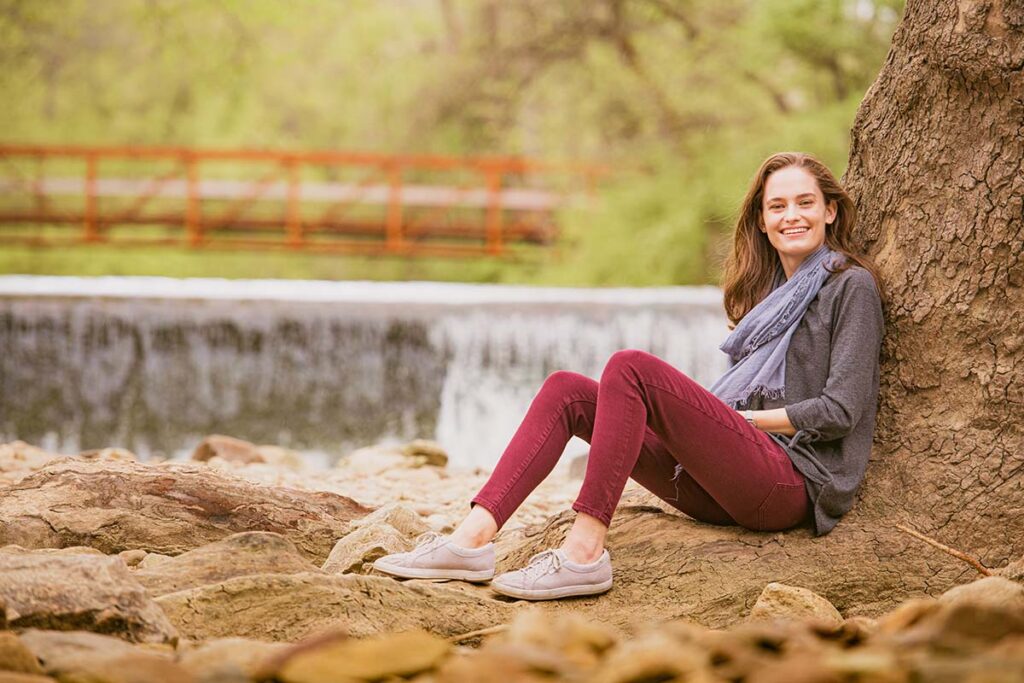 “I first began studying Arabic during my gap year before Lafayette while living in Morocco through a U.S. State Department youth program. At Lafayette, I wanted to continue taking Arabic classes alongside my core coursework in international affairs and environmental science. Dean [Julia] Goldberg told me about the David L. Boren Scholarship, which provides funds for students to study critical languages in regions of the world underrepresented in study abroad. Embracing the ‘Cur Non’ motto, I applied, and ultimately was awarded funds for a period of study in Jordan. My experience taking intensive Arabic courses, living with a Jordanian-Palestininan host family, and studying refugee health care policy was incredibly rewarding, and I am forever grateful I took a leap of faith.” —Katie Kavanagh ’21 (environmental science / international affairs) 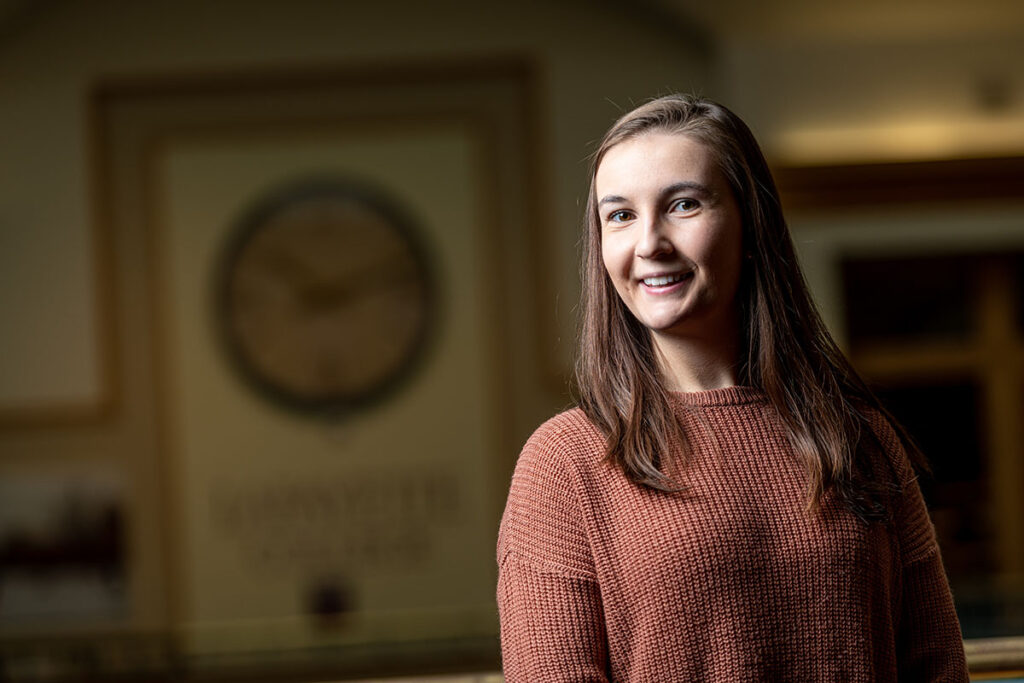 “I came to Lafayette focusing on my pre-med courses, but attending a liberal arts college forced me outside of the comfort of my STEM classes and into Prof. Jessica Carr’s course on Judaism. I ended up loving the way the course combined history, culture, and sociology, and I remember asking myself, ‘Why not add a religious studies minor?’ Taking courses in the Religious Studies Department has been a monumental part of my academic journey at Lafayette. I have been able to apply what I learned while volunteering in local food pantries and hospitals. I’ve come to realize that my humanities courses may be what really helps me treat my patients holistically in the future.” —Liza Makarova ’21 (biology) 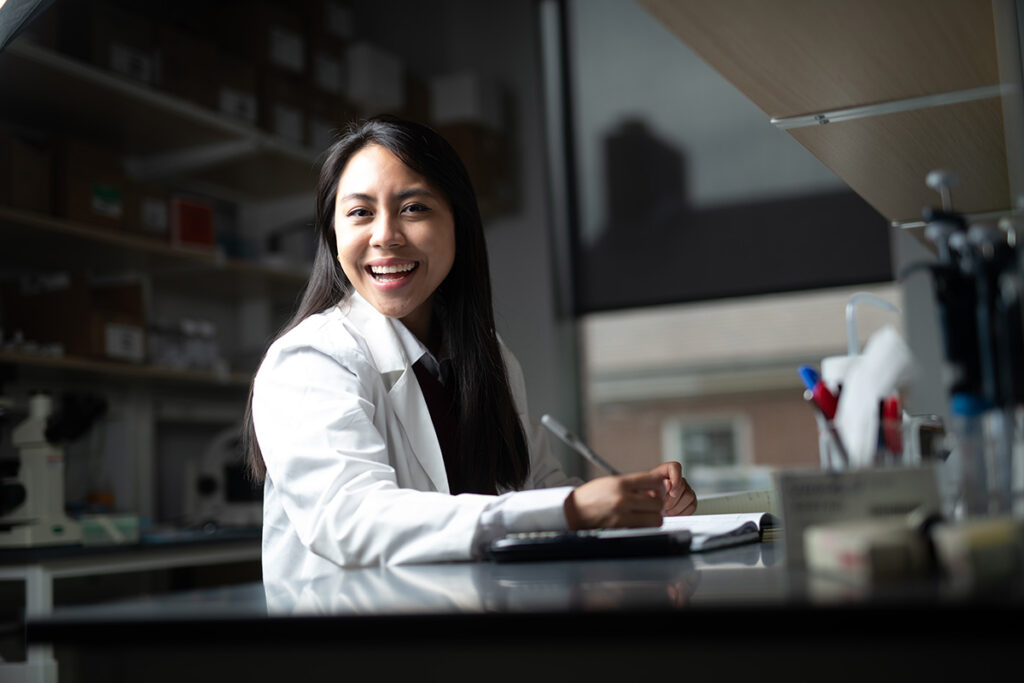 “I have learned how to be comfortable with the uncomfortable. After being rejected from internships and a scholarship I applied to for the summer of 2018, a professor at Lafayette reached out to me and asked if I would like to work at Weill Cornell Medical College with a Lafayette alum. That experience changed my career and integrated research into my medical journey. I did not know much about research, had to learn how to take care of myself in NYC for three months, and did not know if I would even like it. But I took the opportunity with open arms and asked myself, ‘Cur Non?’” —Kimberly Manalang ’21 (biology)

Manalang was recently recognized by the Landis Center for Community Engagement, receiving the Community-Based Learning and Research Prize. Learn more. 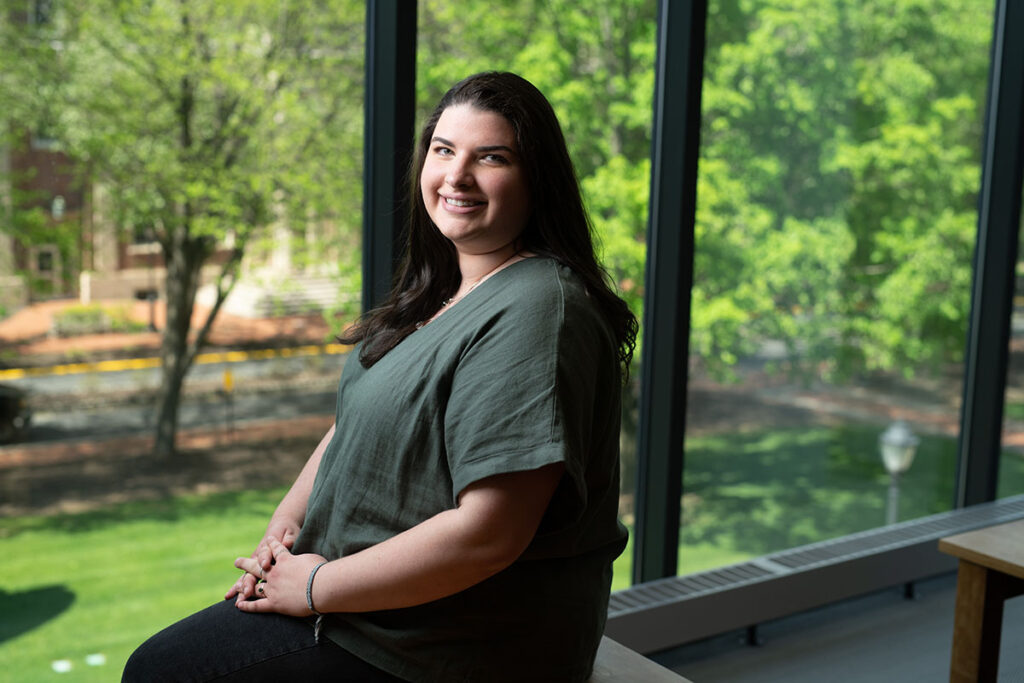 “My sophomore year, I took Intro to Women’s and Gender Studies with Prof. Mary Armstrong. On one of my assignments she wrote, ‘Have you considered majoring in WGS?’ At that point, I hadn’t—I was a declared government and law major searching for another major or minor. After I added WGSS as my second major, I realized how enriching it was to my education as a whole; it gave me a feminist framework by which to approach all of my policy/law focused classes and an overall more critical lens. What began as a ‘Cur Non’ moment went on to define my college experience and provided an avenue to one of my proudest engagements at Lafayette, The Queer Archives Project.” —Kelsey Moum ’21 (government and law/women’s, gender, and sexuality studies) 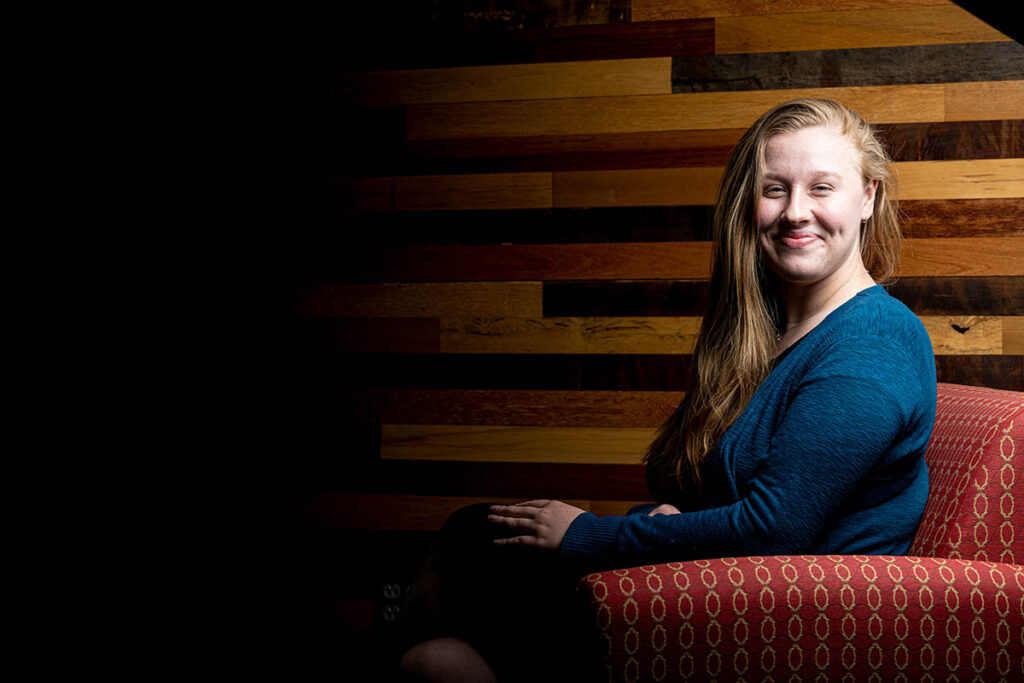 “I have always been a homebody, most comfortable with a small circle of friends and family. When I became interested in a program to study global food justice in Ecuador, Malawi, and Italy while also applying to the Lafayette Initiative for Malagasy Education, I knew I would be pushed out of my comfort zone. I was elated when I was accepted to both, but wary of adjusting to four countries in four months. Yet the chance to positively impact someone else’s life while expanding my own horizons meant that, in the end, it wasn’t a choice at all. I am so thankful I boarded those planes, nerves and all, and proved to myself that some of the greatest rewards in life come when you push past your fears and think ‘Cur Non?’”  —Lauren Phillips-Jackson ’21 (anthropology and sociology)

Phillips-Jackson helped spearhead an anti-racism resource guide on how to learn about, and work toward, racial justice with Kaleidoscope, a group of student social justice peer educators. 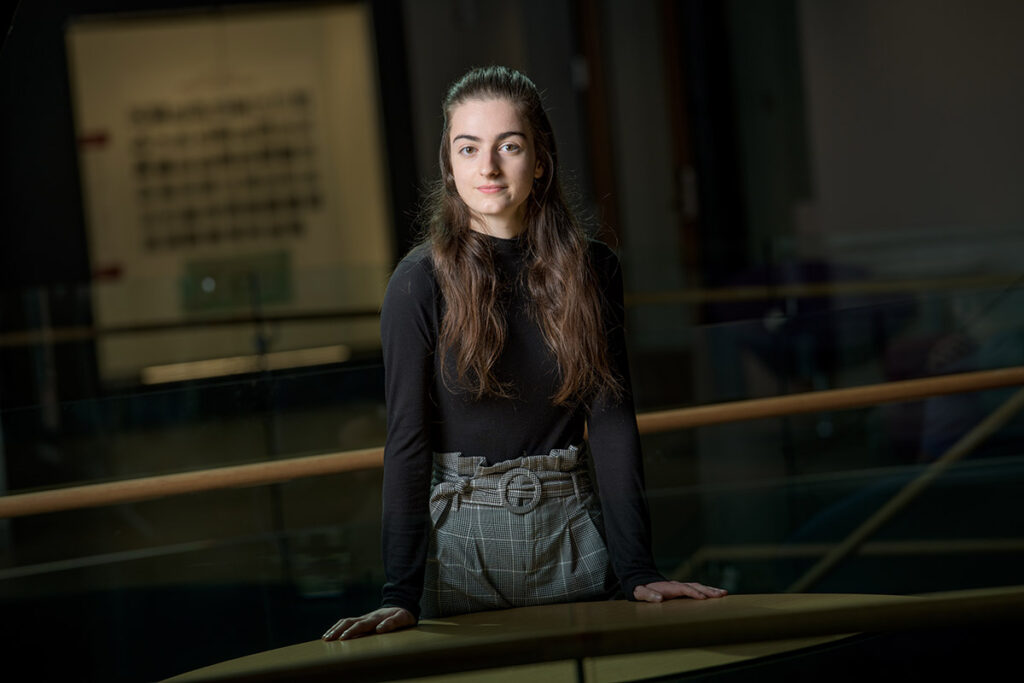 “My most defining ‘Cur Non’ moment was deciding to spend the winter interim in Senegal as a freshman. In my excitement to register, I hadn’t considered the fact that I was the only freshman, knew nobody on the trip, and would have to fly in alone since I wouldn’t be in the U.S. before the interim began. Despite the rough and nervous start, the trip became the highlight of my Lafayette experience. Everyone was incredibly friendly, and I met some of my closest friends. Moreover, the experience of studying abroad enthralled me; there was something powerful about witnessing all you are learning in a classroom. The trip taught me about myself and my values, inspired me to embrace study abroad, and sowed my passion for travel.” —Victoria Puglia ’21 (international affairs)

Puglia is the second Lafayette student and first woman at Lafayette to receive a Rhodes Scholarship. Learn more about her journey. 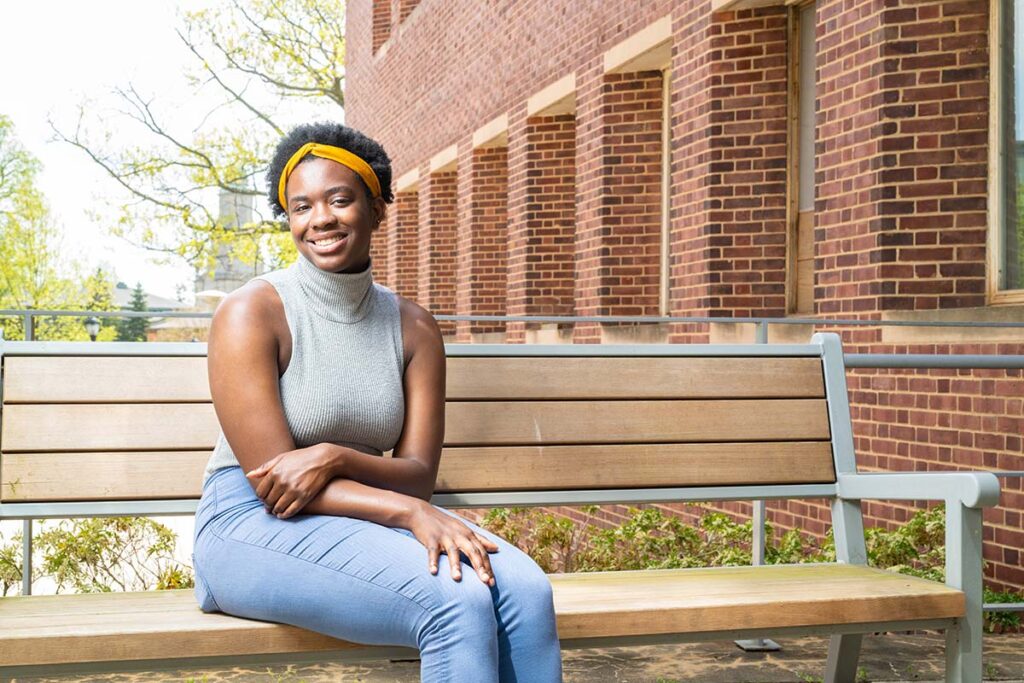 “One of the most ‘Cur Non’ moments occurred outside of this campus through my organizing racial justice work in D.C. I felt a sense of urgency that the time was now or never to denounce white supremacy through acts of demonstrations/rallies, mutual aid, political education, and community building. One moment in particular was the Swann Street raid initiated by the D.C. Police department; many, including myself, had witnessed acts of domestic terrorism against dozens of folks who were forced into a house overnight. Desperate calls for help were shared on the internet. People were looking for accurate information and volunteers willing to help folks with food and escape. I decided to bring bagged food and water from a local church to feed 50 folks.” —Savanna Touré ’21 (neuroscience)

Learn more about Touré’s activism as a changemaker and her experience as a Goldwater Scholarship and Truman Scholarship recipient.