A renewal of a National Science Foundation (NSF) grant providing $17 million in support of the North American Nanohertz Observatory for Gravitational Waves (NANOGrav)—an international group of physicists exploring the existence of gravitational waves through the observation of pulsar stars—will help Professor David Nice’s research students to better understand a transformational challenge in astrophysics: the detection and characterization of low-frequency gravitational waves.

Today, NANOGrav announced the renewal of the NSF Physics Frontiers Center grant, which supports much of the science performed by the group. Since 2015, the grant has allowed Nice and his students to gather and analyze data from sites in West Virginia, Puerto Rico, New Mexico, and Canada. The new grant will fund a postdoctoral fellow to work on the project as well as support undergraduate researchers through the College’s EXCEL program. (Learn more about the group’s work.) 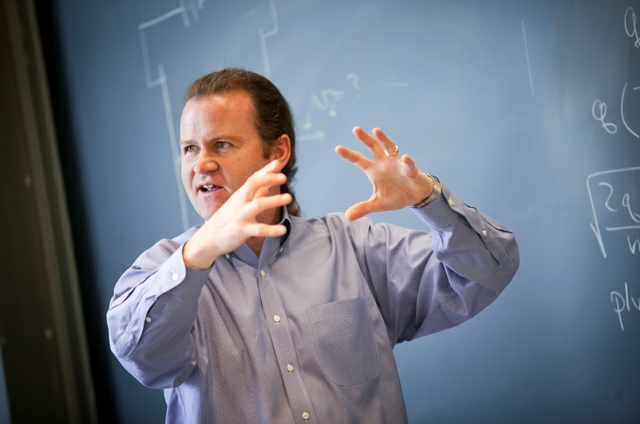 “Gravitational waves—small ripples in space and time caused by the motion of massive stars and black holes—are a new frontier in astronomy. In 2015, the Laser Interferometer Gravitational-Wave Observatory (LIGO) made the first direct detection of gravitational waves from a pair of black holes that collided with one another. That detection, and many detections made since then by LIGO, involves gravitational waves that are very rapid, ripples that stretch and compress space and time many times a second,” shares Nice, professor and head of physics. “In contrast, NANOGrav is seeking to detect very slow ripples, occurring over periods of years, produced by black holes billions of times more massive than those discovered by LIGO. By making these measurements, we will better understand the creation and evolution of massive black holes throughout the universe.”

NANOGrav’s five-year program will make use of the unique capabilities and sensitivity of the Green Bank Telescope (GBT), which is located in the National Radio Quiet Zone protecting the incredibly sensitive telescope from unwanted radio interference, enabling it to study pulsars and other astronomical objects. It also uses data from the Very Large Array (VLA) and collaborates with the Canadian Hydrogen Intensity Mapping Experiment (CHIME).

In addition, NANOGrav will use legacy Arecibo Observatory data, which will anchor combined future data sets. The GBT, VLA, and Arecibo are all funded by the NSF. NANOGrav is also a member of the International Pulsar Timing Array (IPTA) collaboration, which aims to combine data from telescopes in North America, Europe, South Africa, India, and China to form the most sensitive pulsar timing dataset in the world.

“Until last year, the Arecibo Observatory in Puerto Rico was a key part of the NANOGrav observing program. A structural failure of that telescope in August 2020, followed by its collapse in December 2020, was a tragedy for astronomy and for the island of Puerto Rico,” says Nice. “In NANOGrav, we have compensated for the loss of Arecibo by increasing our observations using the Green Bank Telescope, in West Virginia, along with collaborating with the recently completed CHIME telescope in British Columbia, Canada. While the Arecibo Observatory is a significant loss, we will continue our program using other telescope resources, confident in our goal of detecting and characterizing long-period gravitational waves.”

With Lafayette’s portion, Nice’s research students are “exposed to cutting-edge astronomical research, participate in the analysis of the data, and learn a lot about modern computational methods.”

Grant research on how machines and humans can work together