Prof. Benjamin Cohen discusses his contributions to Acquired Tastes: Stories about the Origins of Modern Food and his interest in food history, policies, and reform Twitter

Benjamin Cohen has shared his passion about food history, policies, reform, and technology with students, peers, and a growing audience hungry to learn more about what they eat.

In Acquired Tastes: Stories about the Origins of Modern Food (MIT Press, 2021), Cohen, associate professor of engineering studies and environmental studies, added his voice in a compelling look at the social and industrial forces behind our modern way of eating. His is part of a storyline in a collection of 14 essays in a revealing exploration of pivotal but often overlooked moments in food history between 1870 and 1930, a collection that shows the origins of processed, packaged, globalized, standardized, and marketed foods of our modern age. 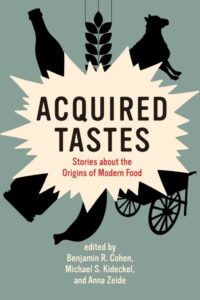 In “Gilded Sugar and Corn Syrup’s Long Con,” the sixth essay in the book, Cohen draws from his critically acclaimed book Pure Adulteration: Cheating on Nature in the Age of Manufactured Food (University of Chicago Press, 2019) to present the many competing factions, perceptions, and legal fights behind society’s entrenched distrust of corn syrup. Consumer suspicions began as early as the 1870s with crooked patent holders, chemical confusion surrounding sucrose, glucose, dextrose, grape sugar, and corn sugar, and a sense that the resource intensive industry was deceiving the customer.

Other essays explore how imperial exploitation prevented Filipino-American cuisine from thriving in the United States and detail how trade policies, class distinctions, and arguments over white and brown bread came together to give shape to modern white bread. Also covered is the rise of pilsner, the first globally marketed beer, which appealed to 19th-century consumer thirsts for hygiene and purity.

He recently sat down to talk about the book and what drives his interest in food and agriculture.

How did you all find each other for this project?

The second layer was that we found people who had a common interest in science and technology studies and the history of technology and the environment, asking what role those play in environmental history. In how we understand the environment, that is, in how we live as part of nature. And then the third thing was that we all had a common ambition to write for broader audiences. We all wanted to work not just on marshalling scholarly evidence but on writing as creative nonfiction essayists.

Post World War II often seems to be the historical marker for the start of modern processed food. But this collection of essays takes us further back into history. What does it tell us about what happened before World War II?

Yes, it goes deeper and much further back.

We present stories from the period between the 1870s and 1930s, because by World War II all the pieces of what people often think of as modern—packaged, processed, marketed, globally distributed, and the like—were in place. The post-war period finds them accelerating, not starting. The earlier period is the one we want policymakers and food systems reformers to really get their arms around. Our modern food system has been a boon in many ways, in terms of quantity, availability, and stability—for some—but we need to grapple with developments over a century ago if we are to make meaningful progress on overcoming the limitations of that system.

You show that those developments are about more than just packaging and processing too, and in so doing, explain some of the limitations you just noted. What’s the bigger sense of transition across the decades you’re writing about?

It might be best to quote what we say in the introduction, that by the mid-20th century, food in much of the United States and Europe bore the collective imprint of global trade, colonization, mass distribution, racist science, celebrity culture, and factory processing. In the mid-19th century, it did not. As we work to build a more just and sustainable food system for the future, we have to work on rebuilding the underpinnings that have limited the justice and environmental health of current food and agriculture.

What are some of the lessons we need to take away from these stories in this particular moment in history?

It’s a book that if you read the introduction and the epilogue, you get the main image we’re trying to present, and then you can dip into the book as you want and pick stories that jump out at you. In addition to the issues of justice and sustainability I mentioned in the prior answer, we also talk in the epilogue of our mutual concern about the ways we can respond to the demand for reform. And on that matter, we worry about a preference in food debates today for individual responses rather than policy-level reforms. These are matters of scale; it can’t just be individual consumer choices about where to shop or which food to buy.

And so the implications are don’t get too excited about some new superfood. Don’t be excited about some new app, which is going to deliver your food more quickly or is more sustainable. Don’t be too excited about your new meal delivery kit. These are individual responses that don’t get at the structural problems, like how we manage land, how we understand access and sovereignty, how we build democracy through foodways, how we understand trade policy, how we make assumptions about which foods are part of our diet. Granted, we need consumer action too, it’s not an either/or proposition, but the book makes the point that we need a better sense of the foundations for the systemic issues we so often hear about today. When we get trapped at the individual consumer level, we perpetuate systems that don’t fully address human populations and human needs.

When did you develop your interest in food history and policy? At what point in your career did you latch on to that?

My main training is in the history of science, technology, and the environment. I’m interested in how we have, historically, come to understand nature and the environment through scientific mechanisms and with technological developments. I used to be a practicing engineer and saw firsthand the ways technologies connected or disconnected us from the land. I then went on to become a historian and technology studies scholar so I could teach and study how we’ve become disconnected and how we could reconnect.

I accepted that to get people interested in that connection, it’s a lot easier to start with food. Everybody wants to talk about food. So I brought that more into my teaching, and I’ve used teaching, and then research, to show the always-grounded connections we have to food production, even if most of us (~98% of the U.S. workforce) are not farmers.

Has this led you to become involved in local food work?

Quite a bit, yes. I’ve been actively involved working with food reform, food policy councils, regional farming, small-scale farming, and sustainable farming. I’ve ended up spending a lot of time working with students and with Lisa Miskelly at LaFarm and addressing food issues here in town.

That wasn’t intentional, I should say. I didn’t really plan this ahead of time; it just kind of followed from a host of topics I’m curious about. It’s how I found my place in the environmental and food justice movement. Food has become such a huge cultural topic of debate in the 21st century in ways that differ from the 20th century. As just one example of that, the mass media devoted to food—cookbooks, magazines, food journalists, the Food Network—has exploded in the last 25 years. Which kind of gets us back to Acquired Tastes, because we wanted to speak to that rabid readership.