Bright, flexible spaces are aimed at fostering collaboration and creating intellectual unions between both engineering and non-engineering majors Twitter

There’s a palpable buzz of energy radiating through Acopian Engineering Center, where recent and ongoing renovations have attracted more non-engineering students than ever before and offered improved facilities for those pursuing engineering degrees.

With a brighter and more inviting campus destination, Acopian Engineering Center welcomes more than 60 non-engineering students in Introduction to Engineering (ES101) this semester, a new milestone in Lafayette’s tradition of connecting engineering and the liberal arts, says Scott Hummel, William A. Jeffers Director of the Engineering Division. These enrollments reflect a broader shift in mindset that is critical to the Engineering Division’s vision to provide “a welcoming and inclusive climate for all to learn, develop, and apply engineering methodologies.” 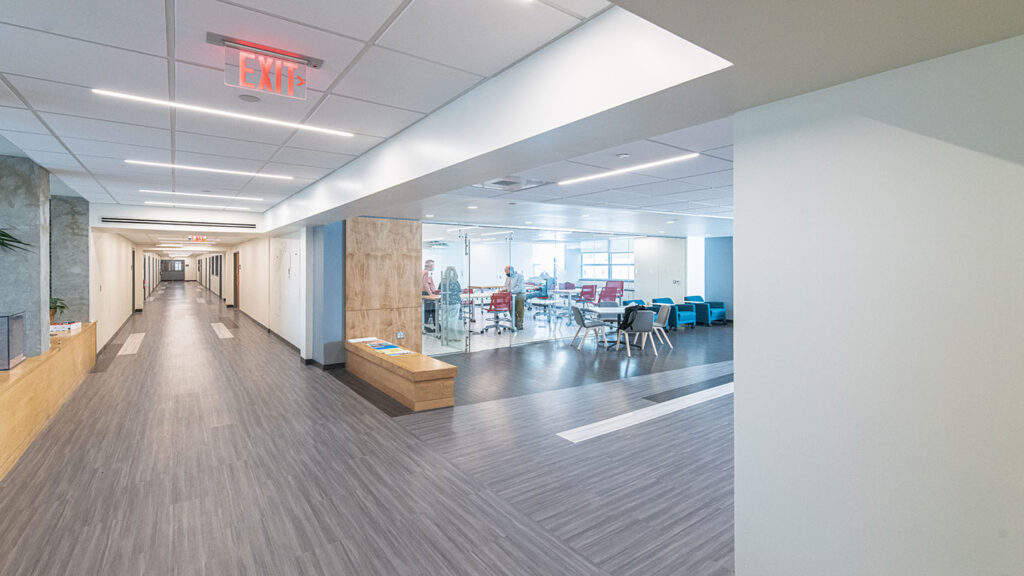 “Engineering has traditionally been seen as fairly exclusive. Our ongoing emphasis is on creating a more inclusive environment in all areas of the division, and the interplay of facilities and curriculum is an important aspect of this comprehensive effort,” Hummel says.

The second phase of renovations at Acopian Engineering Center was funded by gifts to the Engineering Division, including major gifts by Alfred and Sharene Chuang P’23, Bill and Jodi Felton P’23, and the Paynton family ’52 ’86 ’04, and ’22. Building on the success of the interior renovations completed during summer 2019, this latest phase was completed over summer 2021.

There’s now more open, flexible space for gathering outside of class and more windows to allow greater visibility and natural light. Reconfigured rooms have updated furnishings, new AV equipment and lighting, and casework cubbies with whiteboard surfaces to make identification a cinch. Additional highlights include updated flooring and paint in the north wing corridors and several rooms configured into updated research labs and collaboration spaces in the Mechanical Engineering Department on the second floor.

Hummel eagerly shows how the bright space and updated cabinetry is used to store lab project equipment. This more inviting and more flexible space is a pleasant contrast to a nearby dimly lit room that has equipment laid out on metal shelves in a dark gray and green environment.

On the fourth floor, classroom 400 has been updated into a new collaboration space. Similar to the new rooms on the second floor, it has updated finishes, new AV and lighting, new casework cubbies, a glass wall, and door at the entry. The renovation includes a casual gathering space to encourage collaboration and foster a sense of community.

A popular furnishing in the new spaces is a convertible worktable with a stowable computer. The ingenious table was designed by Hummel and Dan Sabatino, associate professor of mechanical engineering and department head, and built at Lafayette by the Engineering Machine Shop. The table features a computer with a wide-screen monitor that tucks under the butcher-block top. The table functions as a lab-bench or conference table and can be easily moved since it’s on wheels. 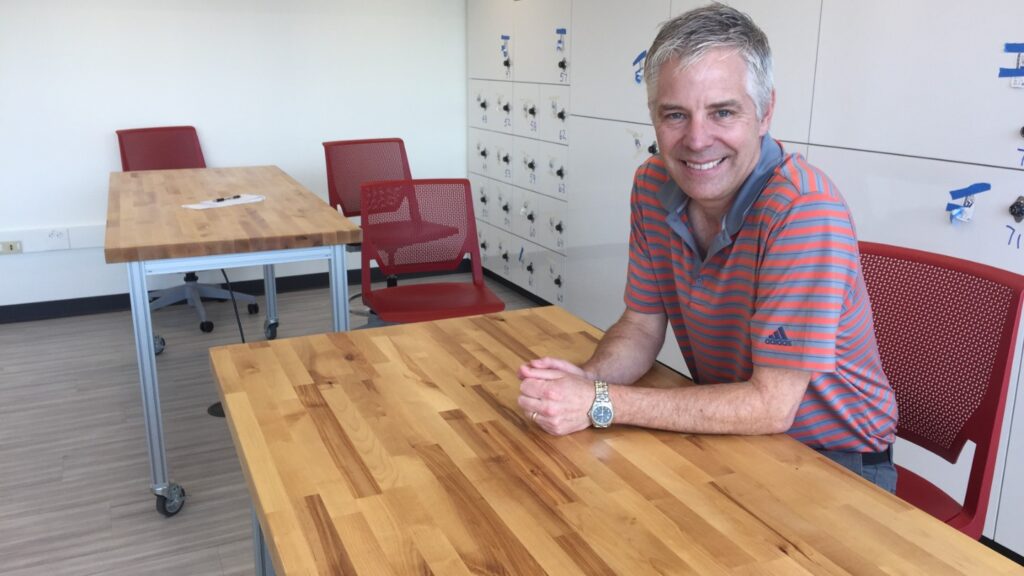 Scott Hummel at one of the worktables he designed with Prof. Dan Sabatino

Hummel has often spoken about the need for facilities that foster collaboration and spaces that naturally bring people together, essential ingredients in creating intellectual unions. Steady student use of the new spaces outside of class seems to indicate that the renovations have indeed created an environment that brings people together and encourages them to feel comfortable and at home.

Acopian’s inviting, inclusive spaces not only welcome more students to Acopian, but they also send a very tangible message about Lafayette’s position as a top-ranked engineering school, he says.

Enrollment in Lafayette’s engineering program has grown by 15% in the last eight years. Women account for over 40% of the total engineering enrollment, compared to 25% just a decade ago.

The next phase of the Acopian Engineering Center renovations will include an expansion to the fifth floor and will be named the Scott Pavilion. The addition was made possible through a generous gift from Walter Scott ’59. Currently, the fifth floor does not extend to the east side of the facility. The 4,000-square-foot expansion will add three high-tech classrooms and a glass collaboration center, supporting the Engineering Division’s enrollment growth.

Along with the fifth-floor expansion, future phases will include a remodeled entryway equipped with a digital information wall and state-of-the-art laboratories in robotics and bioengineering. More casual study areas with natural light will be added throughout the facility to create inviting and open areas for students to learn and collaborate.

“It’s all part of a vision to have students and faculty come together in a fluid way throughout the campus,” says Hummel.

Improvements include leading-edge laboratories in robotics and bioengineering

Lafayette College’s engineering division provides an education that emphasizes close interaction between students and faculty, opportunities to conduct research and complete hands-on design projects, strong programs in the liberal arts, and a variety of ways to study abroad.