Prof. Nara Almeida and Leigh Jacobsen ’22 have found symmetry with their shared interest in preserving and reusing existing structures.

Jacobsen’s research project, mentored by Almeida, visiting professor of civil and environmental engineering, requires analyzing buildings and measuring their energy efficiency and pathologies, to determine whether to repurpose them. The research focuses particularly on buildings owned by Lafayette College, and is motivated by the economic and environmental benefits of reusing resources that are available within urban environments. 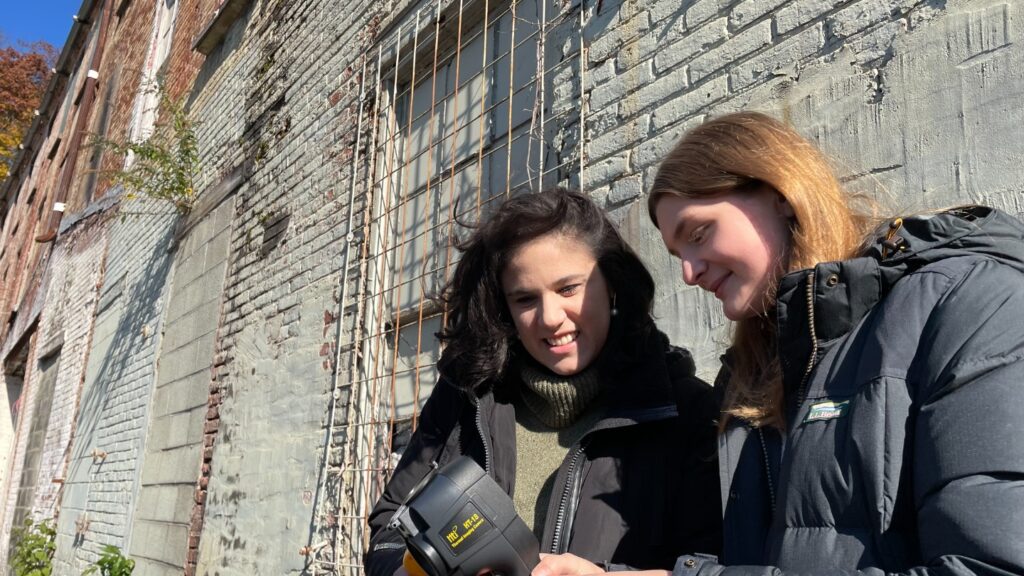 A compact handheld thermal imaging camera was acquired by Jacobsen, a civil engineering major, through a successful $800 grant request made to the Dan O’Neil Memorial Fund, which will have a big effect on the success of their research and help Lafayette assess the future use of two properties.

“Increasing consequences of climate change demand urgent action from governments and society. Civil engineers play an important role in this regard, since their knowledge and skills may be used to enhance people’s quality of life in the present and for the future,” says Almeida, who’s teaching a course called Green Buildings this semester.

“Global warming mitigation strategies include a concept known as urban mining, which consists of reclaiming raw materials from buildings and even waste that already exists within urban environments. Cities like New York, for instance, have been exploring ways to reduce their greenhouse gases emissions by improving the energy efficiency of their existing building systems and operations,” she explains.

Besides the thermal imaging camera mentioned previously, other equipment and materials were purchased with Jacobsen’s $800 grant, which includes concrete crack-width rulers and a digital psychrometer thermo-hygrometer.

The goal of this research is to use active and passive thermography tests to evaluate the state of conservation and energy efficiency of Lafayette’s Rinek Cordage Co. complex at 991 Bushkill Drive, which is undergoing renovations, and the laundry building, at 214 N. Bank St. in downtown Easton.

Renovations at Rinek will include space for an Easton Emergency Squad substation and the Lafayette student EMS program, as well as future space for environmental and conservation research and hands-on projects, a civil engineering “maker space,” and multiuse meeting spaces. Built in 1870, the Rinek complex is part of the Bushkill Corridor, a key component of Easton’s revitalization efforts.

There’s a lot of data collection power in the handheld devices as they set out to assess the two structures, Jacobsen says. 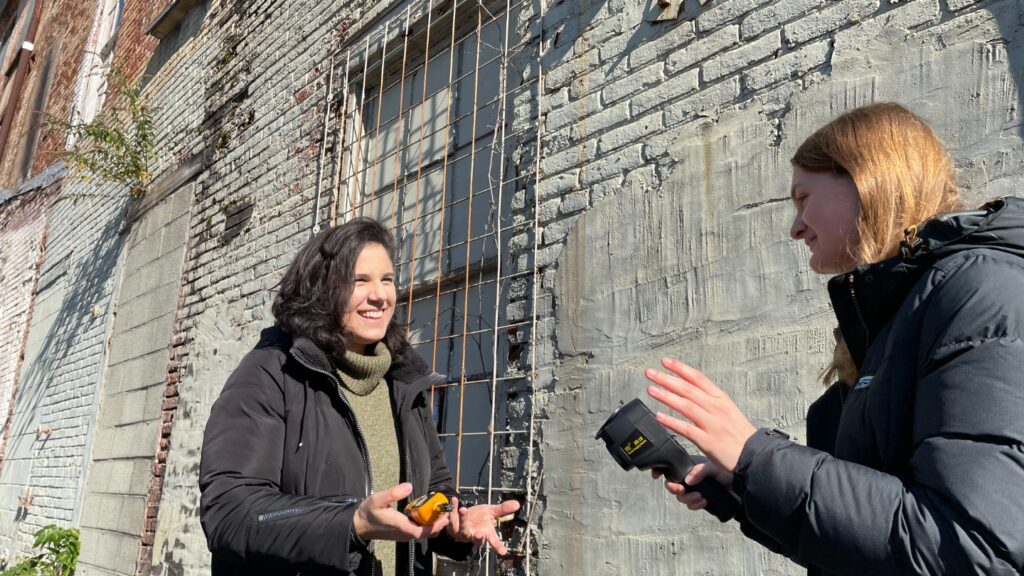 “Basically, there are two different types of tests, a passive and an active,” she explains, noting that the thermal imaging camera picks up temperature changes in a structure to determine its energy efficiency, whereas the thermo-hygrometer measures the ambient temperature and the humidity.

“The camera works by looking at the radiation emitted from the surface of a building,” Jacobsen says. “So you could look at a brick on the wall and take a photo of it. It converts thermal radiation into electrical signals, which are produced into an image with different color scales.

“We’re still in the early stages, but the grant helped us get things moving,” she says. “It’s been very exciting to get the equipment and start to use it.”

For multiple reasons, it often makes more sense to renovate a building, especially a solid brick one like Rinek, than raze it, Almeida says.

“But we cannot manage our plans without data,” she says. “This is going to help us in measuring the cracks, measuring the extra humidity in the building, and also measuring energy efficiency and other pathologies. In order to reuse a structure, we have to make sure that it’s energy efficient.”

It’s less expensive and more environmentally sound to renovate a building than to build a new one, unless it’s too compromised, she says, noting that reusing buildings has been in practice in Europe for centuries.

“If you already have the envelope, the roof and the structure, why not reuse it, and avoid greater greenhouse emissions from demolition and construction activities?” Almeida says. “Think about it, if you’re demolishing something, you need to divert all of this waste that you’re generating, which requires transportation and disposal. It’s the same for obtaining brand-new materials and resources.”

Engineering With a Heart