To portray an elite women's soccer team, the cast of The Wolves added running, passing, and kicking to their skill set Twitter 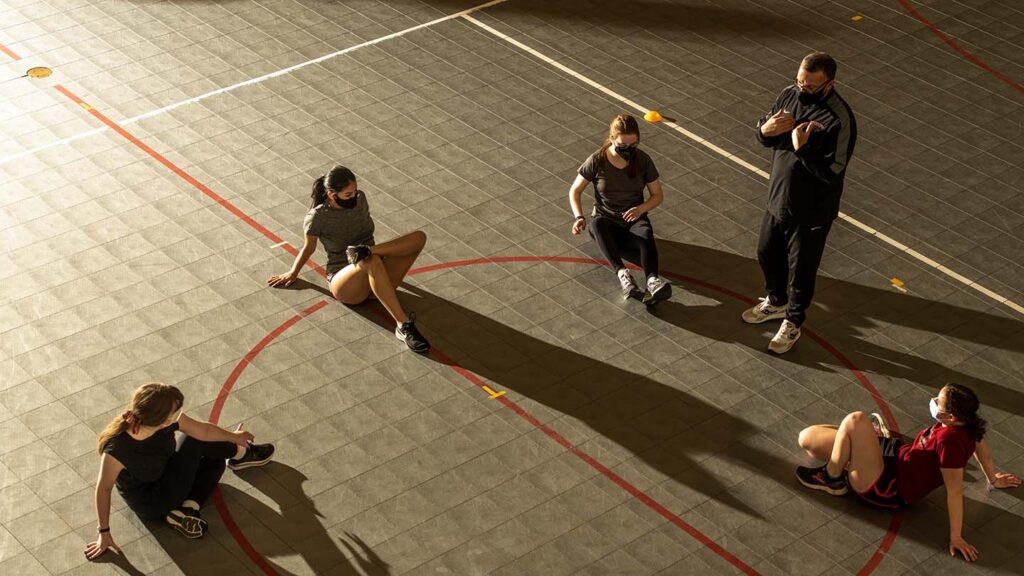 If you were ever on a successful team, then you understand the difference between on field and off.

On, you were seamless in your ability to communicate and function, able to anticipate and execute, push and support, dazzle and finish.

Off, though, was entirely different; the team was a collection of people who ranged in personalities, interests, and backgrounds, but those politics were left on the sidelines when the game began.

Sarah DeLappe’s 2016 play The Wolves explores this dynamic. The play, produced by Lafayette’s Theater Department and directed by Mary Jo Lodge, associate professor of theater, was a critically acclaimed off-Broadway hit and a finalist for the Pulitzer Prize in Drama in 2017.

“The play is an intense portrait of female athleticism and power,” says Lodge.“The girls on team are students, athletes, activists, feminists, daughters, and citizens of the world. They are deeply complex, a welcome change from the many depictions of teen girls onstage and in pop culture as objects of affection, and often, little else.”

Following high school players on an elite girls’ indoor soccer team over six weeks of Saturday games, the play’s scenes center around warm-ups before and cool-downs after their games. It’s in these moments where players stretch, prepare, and discuss a range of topics, bouncing from use of the word bitch to atrocities of the Khmer Rouge, and from menstrual cycles to snake handlers at church. Tensions simmer below the surface as power struggles between players emerge, and the girls navigate complex friendships and loyalties, familial hurts, and even personal traumas.

The drama of the script, however, is not the only challenge the actors have to navigate: They also must convincingly play soccer onstage in the Weiss Theater. It’s not uncommon for actors to have to learn new skills. Hollywood abounds with stories of actors who take on extreme measures to prepare for a role.

The cast of The Wolves had to learn to play soccer, which most had not done since elementary school. Onstage, imagine adding a Cruyff or knee juggling to learning lines, remembering blocking, and developing characterization. It’s a lot to juggle.

Lodge, who has never played soccer, went to experts for help. Leopards women’s soccer head coach Mick Statham came onboard to help train the actors, launching a novel collaboration between athletics and the arts at Lafayette. To start, the actors, who were cast in December 2021, had some training at the end of last semester, and then each one took a ball home over January interim to practice basic moves and footwork.

On a Monday afternoon two weeks before opening night, Statham has the cast in Kamine Gym running drills. Given the confines of the stage, ball control is crucial. So the women are running, passing, and kicking.

He, Lodge, and the cast have been there twice a week since the spring term started (in addition to regular play rehearsals). One actor is blasting kicks into the back of a goal, practicing so she can hit three in a row in a scene onstage.

Lodge notes that this collaboration is a great example of what makes the Lafayette experience so special. “Mick and the entire Athletics Department have been enthusiastic partners in this process, and their support has enriched both the play, and, more importantly, the student experience of rehearsing,” says Lodge. “The cast and I are sad that our gym time is ending—it has unexpectedly become an exciting place for both fun and learning for all of us.”

Of course, the show not only has plenty of soccer playing, it also includes other hallmarks of the game: fiery inspirational speeches, taunts to the competition, fighting for position, jawing about the coach, daps (ritualized handshakes), and chest bumping.

The show is for mature audiences as the women discuss dating, eating disorders, and abortion … often laced with profanity. And after losing a game and a visit from a college scout, the stakes get higher. Some of the tensions, pressurized for the first half, explode in the second.

Attend a production of The Wolves at Weiss Theater at Buck Hall, part of the downtown Williams Arts Campus, March 3-5, at 7:30 p.m. and March 6, at 2 p.m.