Walter A. Scott ’59 has endowed an Integrative Engineering chair, advancing the new degree program that allows students to study emerging and interdisciplinary fields of engineering Twitter

Walter A. Scott ’59, whose support of scholarship and student success is reflected across Lafayette College, has endowed the Walter Scott Chair of Integrative Engineering, advancing and supporting the new degree program that offers the opportunity to study emerging and interdisciplinary fields of engineering.

“We are grateful for Walter’s generous gift, which speaks to his passion for interdisciplinary teaching and learning as exemplified by the integrative engineering program,” says Scott Hummel, William A. Jeffers Director of the Engineering Division. 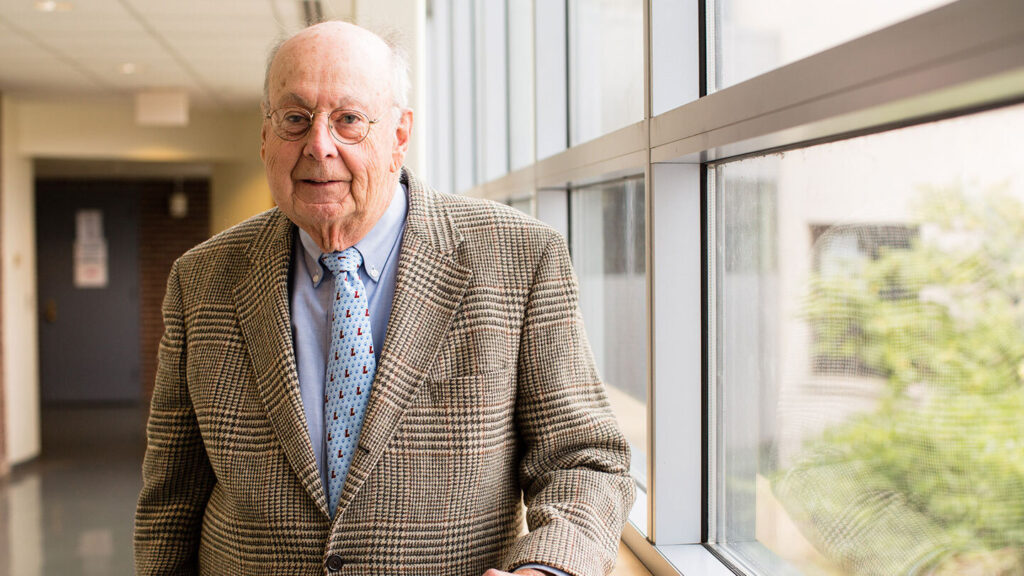 Walter A. Scott ’59 has endowed a chair for the new Integrative Engineering program at Lafayette College.

“His passion fits with a broad vision of inclusion in the Engineering Division, which encompasses curricular endeavors as well as students, the faculty, and encourages diversity of thought,” Hummel adds. “Endowing the leadership position for this program is formal recognition of its importance to the College in fulfilling its goals and mission.”

“So when Scott (Hummel) approached me about supporting the integrative engineering program, I found that really appealing,” he says. “It provides students more flexibility with their program without sacrificing scholastic rigor, and enables them to concentrate in areas such as bioengineering and robotics.”

Students select an area of focus in bioengineering, robotics, or environment and energy, and can choose relevant coursework from the humanities and social sciences toward the degree requirements to integrate their area of focus with the liberal arts. The program provides a flexible framework designed to foster connections across disciplines.

The foundational element of the major consists of a sequence of three courses based on systems thinking, encouraging students to see commonalities across many fields.

Interest in the program is steadily growing, with 10 students enrolled in the first cohort, 20 in the second, and 30 in the third.

“We are honored by Walter’s unwavering support for the students, faculty, and staff of this special community,” says President Nicole Farmer Hurd. “His gift enables the Engineering Division to advance our commitment to innovative and inclusive programs that will create the next generation of leaders.”

“The integrative engineering program greatly appreciates Walter Scott’s generosity as we look to provide new opportunities in the years ahead for students and faculty whose interests extend across and beyond the boundaries of the traditional engineering disciplines,” Brandes says. “It is our hope that integrative engineering will also be a catalyst for increasing interaction among students and faculty from different degree programs.”

Scott’s gift also supports the expansion at Acopian Engineering Center. Now under construction on the east side of Acopian, the 4,000-square-foot Scott Pavilion on the fifth floor will add three high-tech classrooms and a glass collaboration center. This expansion was necessary to support both the integrative engineering program and the Engineering Division’s enrollment growth.

Enrollment in Lafayette’s engineering program has grown by 15% in the last eight years. Women account for more than 40% of the total engineering enrollment, compared to 25% just a decade ago.

Scott’s steadfast support of faculty, scholarship, and student learning across Lafayette is reflected in multiple ways. The Kate and Walter Scott ’59 Chair in Engineering was established in 2018 to recognize and provide mentoring support to underrepresented students in the Engineering Division. Lindsay Soh, associate professor of chemical and biomolecular engineering, currently holds the position.

Scott’s generosity also extends beyond Acopian and includes the establishment in 1996 of the annual Marquis Distinguished Teaching Awards and a gift to extensively renovate Scott Hall, named in memory of Scott’s parents, Ruth Hawkins Scott and Charles Lukens Scott. The gift also endowed a scholarship fund that provides financial assistance to Marquis Scholars.

After receiving a civil engineering degree at Lafayette in 1959, Scott, who grew up in Wilson Borough, not far from the College, earned graduate degrees from University of Illinois and Yale University. He held key positions with several major corporations throughout his career.

Learn about this program

This program offers students the opportunity to develop systems thinking skills and to study in emerging and interdisciplinary fields of engineering, including bioengineering, environment & energy, and robotics. Students that successfully complete the program will graduate with a B.S. degree in Integrative Engineering.