A robotics lab underway as part of the fifth floor expansion and renovations at Acopian Engineering Center is being designed to attract not only integrative engineering majors, but also students from across the Engineering Division and those studying other disciplines.

“It’s going to be primarily a teaching lab and involve teaching and research activities from engineering students and faculty. Hopefully, it will also result in collaborations with areas such as computer science and the arts,” says Alex Brown, assistant professor of mechanical engineering, who’s assisting in the planning for the robotics lab.

Alex Brown, assistant professor of mechanical engineering, who’s assisting in the planning for the robotics lab.

One of the centerpieces of the lab, expected to open in fall, will be an industrial Fanuc robot, with its flexible, dexterous arm, allowing faculty to teach students about kinematics and kinetics. For example, students will program it to pick up objects, an analogy to its myriad applications for precision manufacturing.

This lab space was made possible in part from support from Gary ’01 and Leanne ’02 Anderson. A $50,000 grant from the McCutchen Foundation will support the purchase of a motion tracking system, which digitally records the movements of objects.

The same system also can be used to run scale experiments on small, tabletop mobile robots.

“We’ll be able to study how they move and control their motion using that system,” Brown notes. 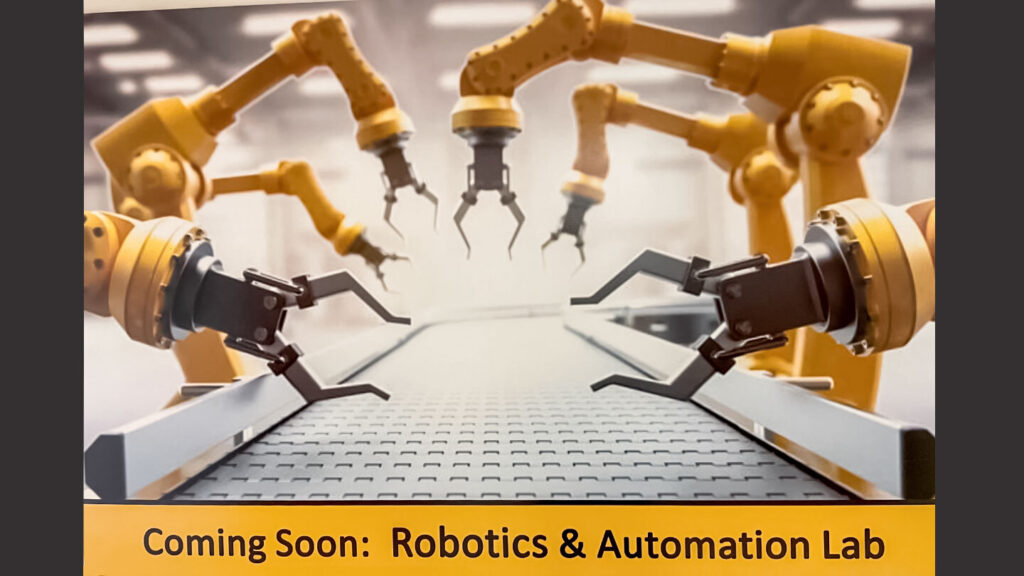 The robotics lab, similar to other recently renovated rooms at Acopian, will feature a flexible space for teaching and easily moved tables and benches to provide wide open areas experiments, he notes, adding that robotics is a growing area of interest.

Sam Milhaven ’24, an integrative engineering major with a focus in robotics, is looking forward to having a dedicated space to support the practical application of robotics.

“A lot of the mechanical engineers have their own designated space. And all the other majors do too,” he says. “It’ll be good to have our own space set aside where we can work on our projects. It will also be good for collaborative research too, because electrical and computer engineering is currently working on a robot. So maybe robotics students can join in with them and work on it.”

“Robots are incredibly interesting because they combine so many different, important ways of thinking about things,” Brown says. “We often make them in our own image. But it’s also true that we need to work toward developing all kinds of robots that work effectively with people. And what that means is that the human element is also important.”

A successful roboticist needs to consider a range of disciplines—from physics and computer science to electrical engineering and mechanical engineering, and even philosophy, he says.

“The integrative engineering program needs a space where everybody can come together and look at these areas in a big picture environment,” Brown says. “That’s what this lab will do for us.”

Learn about this major

Program offers students the opportunity to develop systems thinking skills and to study in emerging and interdisciplinary fields of engineering, including bioengineering, environment & energy, and robotics.