A recently published research paper by Lafayette College economics professors Joaquín Gómez-Miñambres and Hongxing Liu reveals how something as basic as the design of a food menu may influence how much people order and whether it’s consumed or discarded.

Using a combination of field experiments and online surveys, they show that when encountering menus that more prominently display small portions, people are more likely to choose small portions of food and also waste less. Therefore, “narrow menus” can not only boost healthier eating, but also lower food waste, an important goal in the fight against climate change. 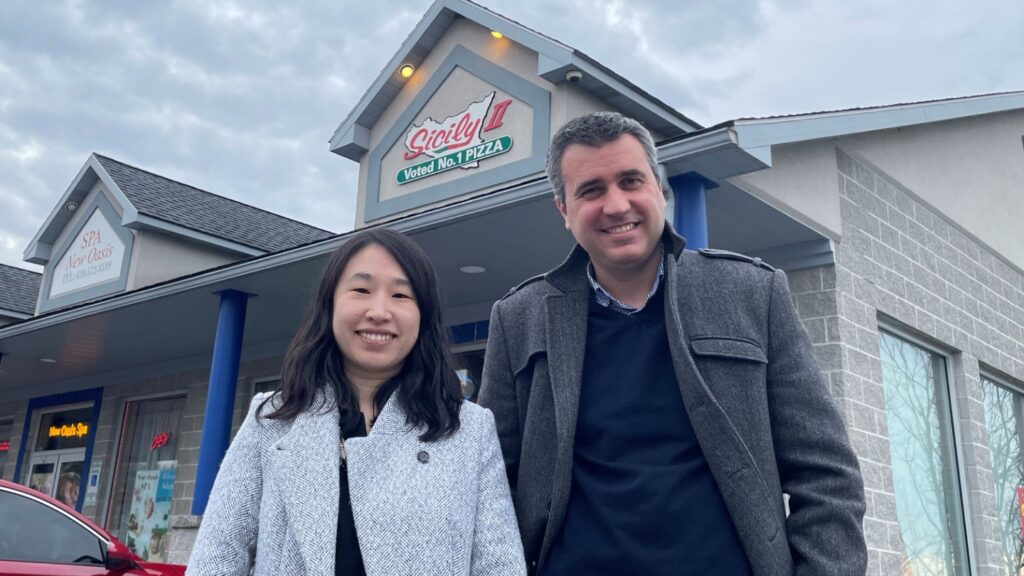 Food waste is a global problem—about a third of the food produced is lost annually, according to the Food and Agriculture Organization of the United Nations. Understanding how to address it requires interdisciplinary efforts, Gómez-Miñambres and Liu say.

Their interest in the research began several years ago with the Office of Sustainability, which started tracking the amount of waste generated in campus dining halls, as they zeroed in on how the number of alternatives displayed in a restaurant menu might ultimately affect the size of a food order and how much of it will get thrown away.

“As economists, we were interested in this topic of food waste, but we also wanted to study it more precisely, using a controlled environment,” says Gómez-Miñambres, assistant professor of economics, adding that it’s a challenging task because food waste is difficult to aggregate. A discarded chicken wing or banana peel are different from a tossed slice of lemon meringue pie.

“You’re only getting the aggregated data, not the individual data,” he says. “We wanted to do it more scientifically, so that we can provide something applicable not only to our campus, but also just more generally for others to learn as well.”

Changing behaviors about food waste requires a look at individual consumption of standardized food whose weight is easy to measure, so Gómez-Miñambres and Liu turned to one of the most ubiquitous foods known to college campuses—pizza.

They conducted field experiments during spring semester 2019 and in February 2020 in which they asked 130 students to complete a survey, offering a free meal of pizza and a soft drink as an incentive. The pizza came from Sicily II in Forks Township, which regularly delivers pizza for campus events.

Some students ordered from an online menu that presented a more narrow list of selections and led to smaller orders, unlike those who chose from a standard menu with more options. Results showed a significantly higher number of students ordering a single slice from the narrower menu as compared to the larger order placed by those using standard menus with harder-to-resist choices, leading to more food waste.

Liu, assistant professor of economics, says the pizza experiment can be applied to buffet-style restaurants, which could adopt a system to curb choices and reduce consumer temptation. School or workplace buffet-style cafeterias, for example, where people often take more than they can eat, could serve a fixed small portion for customers as the default while still allowing them to ask for more and address public hygiene concerns at the same time, the study suggests.

Changes in how food is ordered and the resulting reduction in food waste have positive environmental implications but also present financial incentives, resulting in about $250,000 a year in savings for a college campus like Lafayette’s, Gómez-Miñambres and Liu say.

Their study reveals that a residential college or university student wastes about 140 pounds of food annually, and, at the national level, campuses discard 22 million pounds of uneaten food a year, a roughly $27 million loss.

“Individual behavior is at the root of economics, which is something we both emphasize to our students, who soon discover that the field is much more than about money,” Gómez-Miñambres says. “Economics opens the door for us to solve many problems, even something such as food waste, which is not always identified as an economic problem.”

New book: Women in the Workforce

Women's work, says Prof. Susan Averett, is a huge contribution to our economy—and everybody loses when work/life balance isn't right

Economics can give you invaluable insight into how the contemporary world works, excellent training and practice in qualitative and quantitative reasoning, and an understanding of the complex political economic issues that face the United States and the world today.