Facing stagnant salaries and an ever-increasing and complex workload, prosecutors are in short supply in the nation’s largest cities, a situation that has pressing implications for constituents and getting cases through the courts, according to a new study by Prof. Adam Biener. 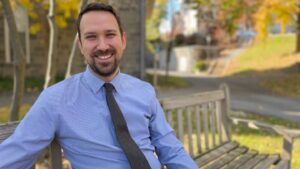 Biener’s “Prosecutor Workplace and Compensation Study,” done for and in concert with the Association of Prosecuting Attorneys, a nonprofit, nonpartisan professional organization of elected and appointed prosecutors, reveals that prosecutor’s offices offices are constrained by inadequate staffing, uncompetitive compensation, and a lack of resources to better serve their communities.

“These challenges have likely been exacerbated by disruptions from the COVID-19 pandemic, and may result in further strain, burnout, and attrition that can undermine the functioning of prosecutors’ offices,” the study says.

“It’s important to think about the role of the prosecutor,” says Biener, assistant professor of economics. “Oftentimes, we have a fairly narrow conception of what prosecutors do when we see them on television reacting to a particularly egregious or heinous crime that has been committed. But a lot of the job is really unseen. Very few cases ever make it to trial.”

Increasingly, prosecutors are overseeing specialized dockets and programs for certain offenses, such as for people charged with drug-related crimes, and dealing with rising expectations related to the use of sophisticated technology in preparing cases.

“The role of the prosecutor has expanded a lot over the last 20 years,” says Biener, pointing to the use of police body cameras as an example of how preparing a case has become more tedious and cumbersome.

“What may originally have been boxes of paperwork—transcripts of calls and emails—now involves the review of hours and hours of camera footage,” he says. “And these things have to be delivered to the defense in a timely way. This is the legal expectation.”

The study showed that, on average, 162 attorneys per office were involved in processing criminal cases, translating to 10.4 attorneys per 100,000 jurisdiction residents.

The average starting annual salary for a nonsupervising attorney among large prosecutors’ offices is $68,506, per 2020 statistics. Biener’s study notes that the pay rate has not kept up with inflation and the increased demands placed on prosecutors.

“The volume of material they have to consider is increasing, and the same tasks that they have traditionally performed are becoming more onerous,” Biener says. “This could put great strain on any person who has to fulfill this role. But instead of increasing the compensation or resources to allow any prosecutor to do the increasingly complex, time-consuming job, pay is not rising in a way that’s commensurate with that additional demand on that person.”

Doing more with less is the classic scenario that inevitably leads to burnout, low job satisfaction, and attrition, motivating prosecutors, just like any other disaffected employee, to look for work elsewhere, he adds.

The study surveyed county prosecutors’ offices whose jurisdictions contain the 50 most populous U.S. cities, which collectively prosecute a large share of state-level crimes in the country. Each office was asked to complete a survey about staffing, compensation, and programmatic needs. Of those 50 offices, 31 responded.

Ironically prophetic in light of the study’s conclusions, the primary reason given for not responding was insufficient staff time to dedicate to completing the survey.

The findings in Biener’s study, which was conceived two years ago, will be of utmost interest when the association’s Major County Prosecutor’s Council meets Nov. 18-19 in New York City.

“The report was conceived based on the claims from the prosecutors who are members of the association that they find they’re under-resourced and understaffed and have difficulty attracting new prosecutors to do an increasingly difficult job,” Biener says. “They’re very concerned that this cannot only be a strain on the prosecutors themselves, but also can diminish the prosecutors’ offices’ ability to improve public safety.”

He notes that the findings may be of interest to average citizens concerned about the impact of COVID-19, from job strains to growing case backlogs. The findings also may assist policymakers in their understanding of the situation and improve their dialogue with prosecutors’ offices.

“The offices that responded to the study wanted to know where they stand in relation to their peers,” Biener says. “They wanted to understand what the possible causes, correlates, and consequences of their resource strains might be, and understand better the nature of the problems they’re experiencing.”