When she first walks into a room, Ani Khachadourian ’25 seems like your average first-year college student. Clad in a Lafayette Athletics jacket with a bag of books slung over one shoulder, Khachadourian is bright-eyed and easygoing, with a warm presence and a natural ease for making conversation. But once you get to know her, you quickly learn that she isn’t exactly like the rest of her peers.

Born with a hearing impairment, the Cary, North Carolina, native has never known a world without sound. Thanks to a team of doctors and audiologists who screened her just after she was born, Khachadourian was able to be fitted with hearing aids when she was just 2 months old. And though she has never heard exactly the way everyone else hears, she hears well enough to never let her disability keep her from achieving her goals.

Soccer came into her life at the age of 3, following in the footsteps of a family friend who played soccer. The program she begged her mom to sign up for was called Lil’ Kickers, and from her first time on the field, she never looked back.

And through the persistence of balancing practices and school, she came to have a conversation in 2016 with someone who had a connection to the U.S. Deaf Women’s National Team. 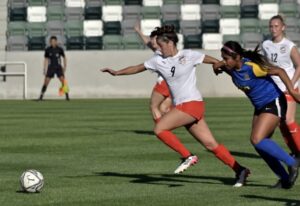 “I was at a practice, and the coach recognized that I had hearing aids because I had put my hair up. And he asked me if I was hard of hearing, and then mentioned that he knew the coach of the deaf national team. I had no idea what he was talking about,” recalls Khachadourian. “I gave him my contact information, and he connected me with Amy Griffin, the head coach, and assistant head coach Joy Fawcett, who was a member of the historic 1999 World Cup team. When I reached out, there was an upcoming camp that January. I attended that camp and have been training with them ever since.”

The practice squads included women of varied ages and cultural backgrounds. They came from across the country and also had varied degrees of hearing loss. It was Khachadourian’s first time being immersed in an environment with all deaf people—a moment she gave herself pause to reflect on, as she realized that she was surrounded by those who faced similar challenges in a world where there are stigmas attached to disability. 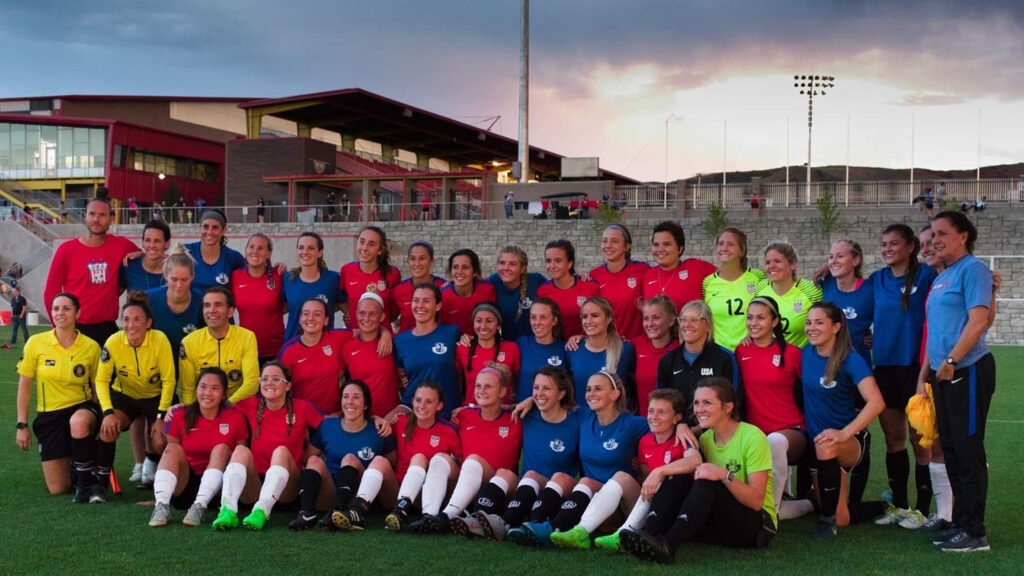 Ani Khachadourian ’25 poses with her teammates on the U.S. Deaf Women’s National Soccer Team. The women are headed to Brazil to compete in the Deaflympics.

“It made me realize that there are people there like me, who struggle on and off the field. That was a huge bonding part of the team. That first experience was a little shocking and a little intimidating, because different ranges of hearing means that everyone has different methods of communication,” she says. “Some people there used sign language and some didn’t, so it was a matter of learning how to communicate together and play together.”

On April 29, Khachadourian and her teammates—who meet on the West Coast for practices that are few and far between—will travel to Caxias do Sul, Brazil, to compete in the Deaflympics, where the U.S. women’s team is heavily favored to win gold. It will be her first international event (the games run May 1-15), and it’s not lost on her that she and her fellow athletes are getting the opportunity to represent their country in a special way. The culture they’ve created is part of what helped her get comfortable with the transition between high school soccer and collegiate soccer.

“You have varying ranges of [athletic] commitment in high school, and people have their own things they’re focusing on. Some people are more into it than others. Some people play differently, and it’s hard to get on the same page. In college, you have to be on the same page and realize you all share the same goal,” reflects Khachadourian, who was able to get to know her Lafayette teammates well despite being kept off the field by an injury this past fall. “We’re very bonded here. Our coach likes to use the word ‘collectivist.’ We’re a shared team with shared values. It shows on the field that we’re committed to winning and putting our best foot forward.

One of the things that Khachadourian didn’t initially share with her peers was that she deals with hearing loss. Though she faces slight degrees of difficulty hearing when she’s in crowds, and her hearing aids pick up sound better from her sides and front, she didn’t expect anyone to have to be cognizant about whether they were talking from behind her, or whether she could hear on the outside of a group versus being on the inside. It’s important to her now, she says, because awareness of hearing impairment and advocacy for the Deaf community hasn’t always been easy to come by.

“A big thing for me in college is that you’re meeting new groups of people, and usually you’re meeting in big groups. I want to participate, but I can’t always understand what’s going on. I do read lips, which was really difficult when everyone was wearing masks. I want to join in, but there are times I just stay silent—which is funny because, in high school, I used to be pretty reserved and quiet,” she muses. “Now, I want to talk to people, and I want to be social.”

The engineering and international affairs dual major has had her eyes opened to multiple interests at Lafayette. Beyond her lifelong love of all things STEM and desire to work in a field where she can use her hands, she’s spent the last several years paying more attention to public policy. The pandemic, she says, brought attention to world events and how politics plays a part. She looks forward to being able to focus more on her studies and finding her balance at Lafayette—including research opportunities in sustainability—after she returns from Brazil with a winning team.

Student actors get an assist from Athletics

‘Need a Lift?’ with Sherryta Freeman

Director of Athletics talks about the making of a championship culture and building a faculty support system for athletes
Categorized in: Athletics, Engineering, Featured News, International Affairs, News and Features, Student Profiles, Students