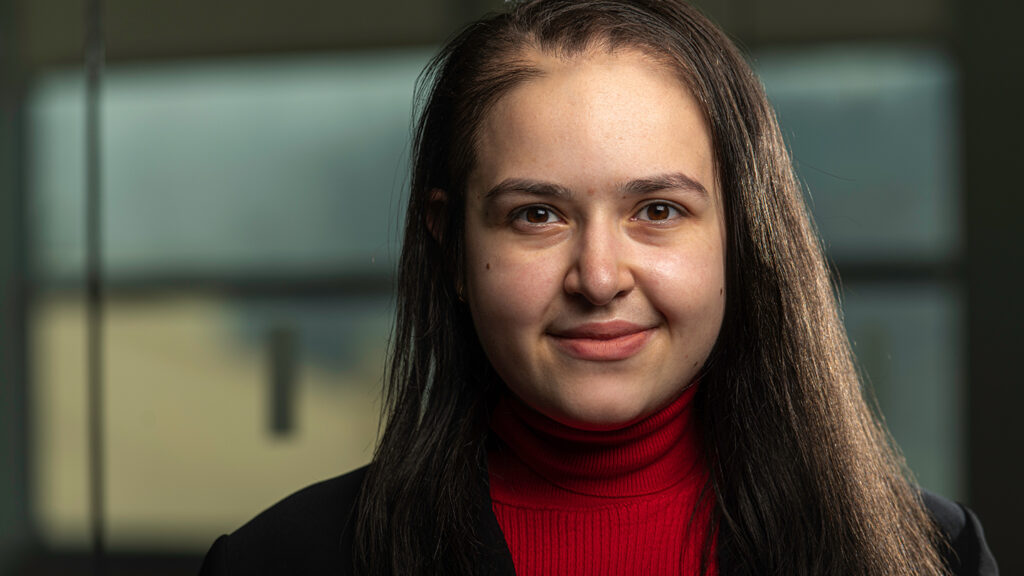 North Macedonia has some of the worst air pollution in Europe, so bad that it often drives people with respiratory disease away from urban areas to escape the foul air.

Angela Busheska ’25 has lived with thick smog in Skopje, the capital of Macedonia, since moving there when she was 17 to train for the Mathematical Olympiads. She lived with her aunt, who had cardiovascular disease, which grew worse with the dense air pollution and, ultimately, led to her untimely death.

But through her loss, Busheska found inspiration to help change people’s habits when it comes to carbon emissions. During a gap year in the height of the pandemic, the electrical engineering and computer science major morphed into a self-starting social entrepreneur.

Busheska learned how to code and started her own nonprofit organization to promote her free mobile app, EnRoute, which measures the amount of carbon emitted through everyday activities and draws attention to the issue of greenwashing in the fashion industry.

She built awareness of her NGO through the Sustainable Chain of Transport Challenge, sponsored by Volvo, and established a partnership with Global Changemakers. In just a few years, EnRoute has taken 180,000 kilograms of carbon out of the atmosphere through the actions of its 80,000 users in 120 countries and a network of ambassadors around the globe.

Now, Busheska’s enterprise has earned her a place on Forbes magazine’s 30 Under 30 Europe 2022 list in the Social Impact category, adding to a growing list of recognition and awards that include 2021 Global Teen Leader, European Young Innovator, the 2021 Diana Award, the 2021 Shawn Mendes Wonder Award, and National Geographic Young Explorer.

“In March 2020, during my gap year, I looked at how I could teach myself to make apps and make a better society in the process,” she says. “The EnRoute app is designed to raise awareness of individual contributions to carbon emissions.”

Pollution in Macedonia stems from the lack of pollution regulations on vehicles and emissions from the textile and clothing industry, and power plants, she says.

“It’s easy to blame the government,” says the recipient of a 2022 Aaron O. Hoff Award in the Emerging Leader category. “I wanted to take a different approach, to raise awareness of situations when we’re in a rush and not thinking about how we can merge activities, and save on petrol and limit C02 emissions at the same time.”

Busheska hopes to integrate more ways the app can reduce a user’s footprint and to establish university chapters across the world and partnerships with schools in North Macedonia and the United States to offer software to students who assist with sustainable living.