Caroline Séquin, assistant professor of history and historian of modern France, was awarded the Council for European Studies (CES) Gender and Sexuality Research Network’s 2022 Best Article Prize. Her article, “Marie Piquemal, the “Colonial Madam”: Brothel Prostitution, Migration, and the Making of Whiteness in Interwar Dakar,” was described by the judges as “a truly fascinating account of the interactions between gender and race,” and that it “stood out for its contribution and originality.” The paper—and Séquin’s lengthy research—reconstructs the life of Marie Piquemal, a French woman turned colonial madam, to explore the world of white prostitution in colonial Dakar, Senegal, in the first half of the 20th century. 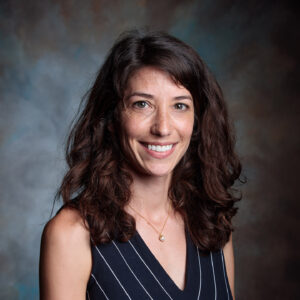 The Gender and Sexuality Research Network aims at bringing together scholars working on gender and sexuality, and enhancing research around a vast range of topics. Séquin’s winning article was published in a Journal of Women’s History special issue and was based on her dissertation—as is a book she is currently writing.

“When I was first trying to find a topic for my dissertation, I wanted to analyze how interracial intimacy was regulated, and lived, in France—a country that claims to be colorblind. Unlike the United States, where we had laws that prevented people of different racial groups from marrying, that was not the case in France after the French Revolution,” says Séquin. “Growing up in France, I grew up seeing a lot of hostility toward interracial couples. My question was, did the French state do anything to try to prevent those relationships? I went into the archives with this really big question of, ‘How can a state prevent interracial intimacy without explicitly referring to race?’”

What her research ultimately uncovered was that the state was not only able to intervene in people’s sexual lives, but that in doing so, it was able to discourage interracial intimacy by providing access to sex workers who had a particular racial identity. In the case of Piquemal, who ran a brothel in Dakar, the capital of French West Africa, she was able to capitalize on this racism by providing white men access to white sex workers in the hopes that they would not go and seek out relationships with African women. With brothels and prostitution very much a part of everyday life in France in the 19th and 20th centuries, women often started out as sex workers and climbed the ladder to running a brothel—and while it was not negatively perceived for men to purchase sex, there was a double standard, as it was stigmatized for women to sell sex.

Séquin’s archival research, which involves race relations, gender politics, and global history, took almost two years and involved trips to France, Senegal, and Martinique in an effort to uncover any information about prostitution. Sorting through hundreds of boxes in various archives, creating a system to identify recurring names, and then working with other archivists to match recurring information allowed Séquin to retrace Piquemal’s life to the end of the 1940s. She also worked with two Lafayette EXCEL research students, Mirana Randriamanantsoa ’21 and Joshua Hale ’23, to go through archival documents and find relevant passages.

“My research students were very smart and dedicated. It made a big difference and they saved me a huge amount of time,” Séquin says. “Sometimes, they ask questions that help you think about your topic in a different way, or in a new way. I really love working with EXCEL students and think it’s a fabulous program.”

Séquin is also appreciative of the opportunity the article provides her to have her peers and those who are experts in her field understand the value of her work, and hopefully add it to their reading lists.

“It’s no surprise that Caroline won an award with this article. She built on several of the most exciting trends in the history of sexuality to write a very original article. She shows how white women who migrated to perform sex work were not the ‘white slaves’ of heated imaginations at the turn of the century, but were instead critical in the project to reinforce practices of colonial racism at the most basic level,” says Joshua Sanborn, David M. ’70 and Linda Roth Professor of History. “Race and sex were intimately connected in colonial Senegal (as elsewhere), and demonstrating this fact allows Caroline to puncture the myth of French colorblindness that has been disingenuously touted ever since the French Revolution. Moreover, she shows this happening not only at the state level, but also at the level of the French citizen.”

“To see history from multiple perspectives is an essential part of inclusion. History is made. History is not owned. That’s why I use the term ‘histories’ instead of the singular. Also, early feminists coined ‘herstories’ to emphasize women’s lived experiences and inclusion in what otherwise may appear in textbooks as a long chain of past wars.  We could say ‘their stories,’ , instead of the history of kings and chieftains. It is essential to recognize not just how everyday people lived, but how multiple layers of history have taken place,” says Katalin Fabian, professor of government and law. “That’s why Caroline’s study about colonial France, gender relations, racial norms, and the challenging of these norms is important. What do we even mean by race? Humans have always been intermixing. What do we highlight? And what do we exclude? It’s amazing to finally have these multiple interpretations and challenges.”