Katalin Fábián, professor of government and law, has received a prestigious literary award for her collaborative work on The Routledge Handbook of Gender in Central-Eastern Europe and Eurasia, a collection of in-depth articles that surveys women’s and gender history and politics in the context of the region’s diverse cultural landscape. 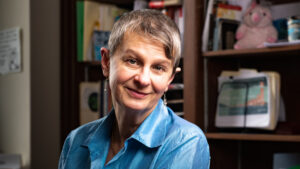 Edited by Fábián, Janet Elise Johnson, professor of political science at Brooklyn College, and Mara Lazda, professor of history at Bronx Community College, the publication was awarded a 2022 Heldt Prize for best book in Slavic, East European, and Eurasian women’s and gender studies by the Association of Women in Slavic Studies (AWSS).

Published in 2021 by Routledge, a leading academic publisher in the humanities, social sciences, and STEM, the first of its kind work explores historical and political approaches to gender in Central-Eastern Europe and post-Soviet Eurasia through the first two decades of the 21st century.

Fábián says she is honored to be receiving the Heldt Prize with her colleagues, and emphasizes that the topics covered in the book by more than 50 international subject area experts on gender in this diverse region, especially how political forces from Soviet-era communism affected gender and sexuality in Russia and Eastern Europe since 1991, speak just as loudly today in other parts of the world.

“Think about the hijab,” says Fábián, whose research interests focus on how women and their organizations participate in the new democracies of post-communist countries.

“Gender is weaponized,” she says. “Inclusion of gender equality is one very important signal for democracy, because it embraces notions for individual choices and diverse expressions.

“I just find it intellectually, politically, and personally, very, very important and insightful to engage with these debates,” adds Fábián, who uses the book in her Government 225 course, The Politics of Postcommunism: Russia, East-Central Europe, and Central Asia.

The Heldt Prize recognizes the accomplishments of Barbara Heldt, American emerita professor of Russian at University of British Columbia, who is known for her scholarship in Slavic and women’s and gender studies.

Studying Hungarian policies on violence against women and girls