At the College’s annual Senior Voices event, four seniors share their experiences and the impact of the Lafayette community Twitter

With their final fall semester coming to an end, four seniors inspired a crowd at Colton Chapel through their stories, reflecting on what their time at Lafayette has meant to them. Their stories differed greatly, ranging from going to college as a cancer survivor to the importance of playing the piano, the impact of Taylor Swift to the feeling of not wanting to go to college in the first place. Still, these stories came together under two commonalities: the community at Lafayette has made their college experience worthwhile as they’ve experienced tremendous growth during their time here.

Excerpts from each of their speeches: 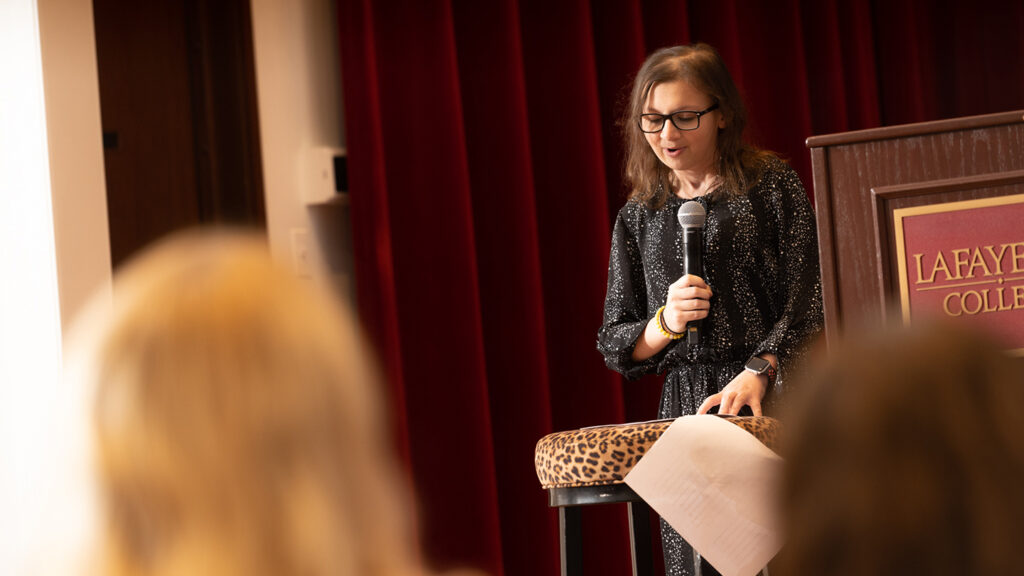 “Going from hospital life to college life with minimal transition time was both extremely exciting but also terrifying. I would truly be on my own for the first time. But it didn’t take me long to realize that I wasn’t alone. I had people in my corner. I had resources on campus that took me perhaps a little too long to turn to, but they were there nonetheless.

“. . . I have two pieces of advice for my freshman self that I want to share: You can’t always go it alone, and that is OK; and the world sometimes kicks you when you’re down, but it is how you bounce back that determines your fate. Freshman year, I thought I could get through anything on my own. But at some point it clicked that that is not true, and I realized how important it is to have people to lean on, especially when times get tough. So thank you, Lafayette, for showing me how to grow both inside and outside the classroom.” 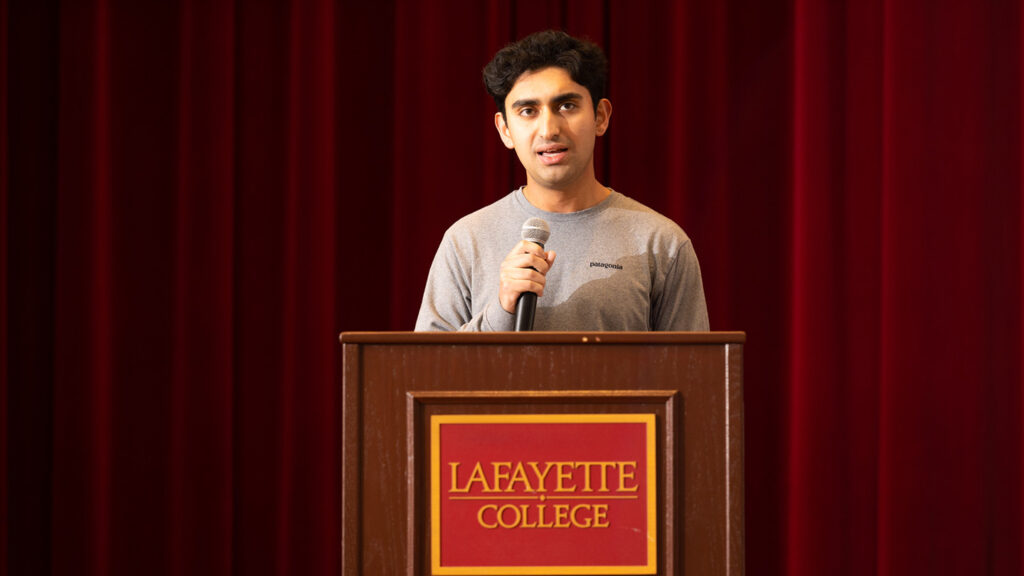 “I got back this semester with a new perspective. I called someone in to repair the pianos. And I kept playing. Except this time, I wasn’t playing alone. I played piano with others playing guitar, singing along, or just listening. That was the best feeling to me—something I had once enjoyed in solitude became something that deepened the bonds between myself and others, and allowed me to get lost in those moments without worrying too much about anything else. Thank you to everyone who sat beside me this semester, who heard me out, who played along. For all of you, keep playing your song. You’ll find that a lot of people are willing to listen.” 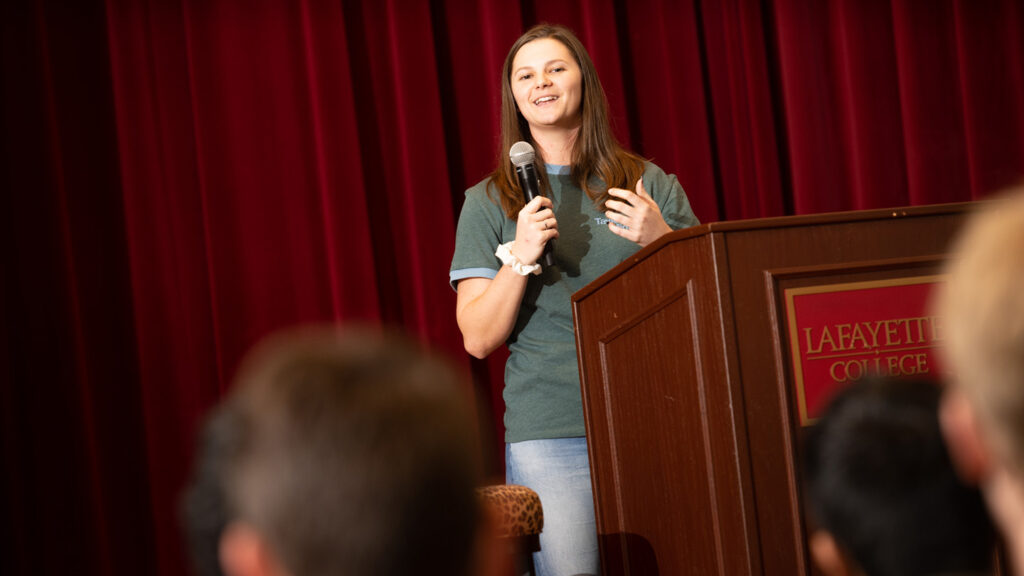 “As usual, she [Taylor Swift] broke tons of records, and some of you may know this because you had a class with me or you were forced to read this, but I wrote an eight-page paper review on the album during my free time between my five classes that I’m taking, studying for my LSAT, and my jobs on campus, and I forced all of my professors to read them, and they did. And there’s something magical about Lafayette: they have professors who care enough to do that. It shows how special each of my professors has made me feel here. So I thank all of them who are here tonight, and even those who aren’t, for putting up with all the times that I have taken the class off-topic but, most importantly, just for always believing in me and listening to the Midnights album when I asked you to.” 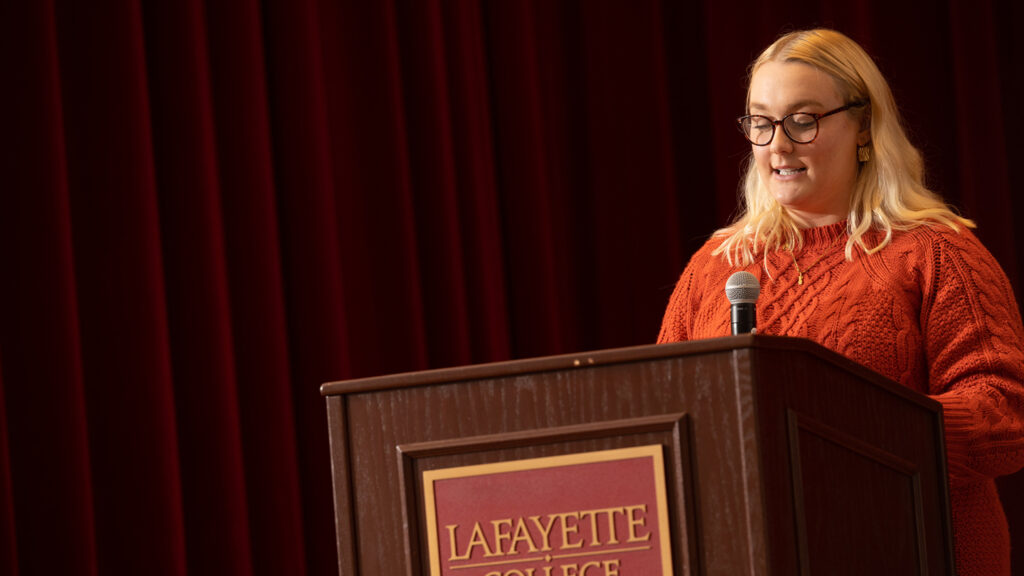 “Lafayette is a really special place, and I’m terrified to leave it. I have found more peace, stability, and love at Lafayette than I knew I would ever receive. Beyond every instructive friendship and looming deadline, I truly believe that I could not have entered a more nurturing and supportive environment. I feel so much joy to pass strangers whose faces I have seen a million times, who are yet strangers but who might not be at the end of next semester at this cozy college of ours. Breakfast at Marquis, the second-floor study rooms at Skillman, and office hours in Pardee all sound like home to me.”