Such is the luck of Emily Emick ’20. Less luck, and more talent, preparedness, and hard work.

The scene was set at First Presbyterian Church in Easton, Pa., as conductor Jennifer Kelly, associate professor of music, composer Libby Larsen, and male soloist Emmet Cahill of Celtic Thunder joined Emick along with a 75-voice community and college chorale and a 30-piece orchestra. 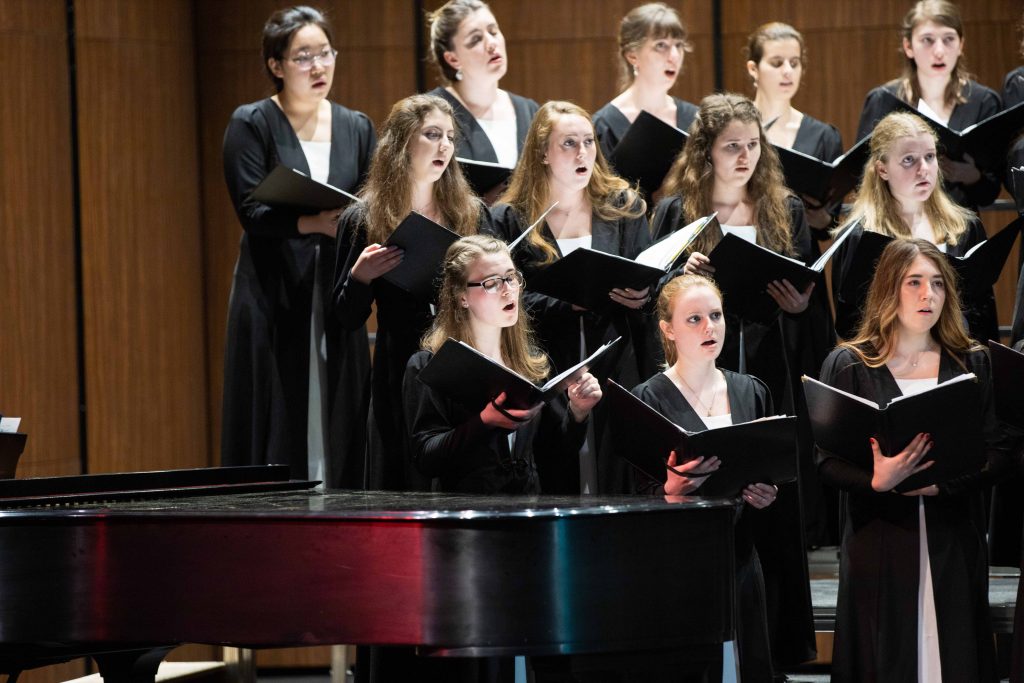 The performance included several pieces that celebrated the Lehigh Valley’s rich history of cultural diversity, including indigenous, immigrant, and African American populations. Larsen’s piece in particular, “At the Forks,” contemplated two central questions about the cultural changes in the local landscape: When a person emigrates, to whom do they pray, and what’s the prayer?

“This was an experience most soloists would not get to have,” says Emick. “It was daunting to be in such an important debut and harmonically complex duet. It was also fun, humbling, and an opportunity to learn from amazing performers.”

Her life as performer began being cultivated as a first-grader when she joined her church’s children’s choir. Her father was a pastor and musically inclined, so performance was inevitable. Children’s choir became youth choir and eventually adult choir followed by solo work.

While she learned by ear and eventually learned to read music, this economics and music double major only began to study music theory here at the College. 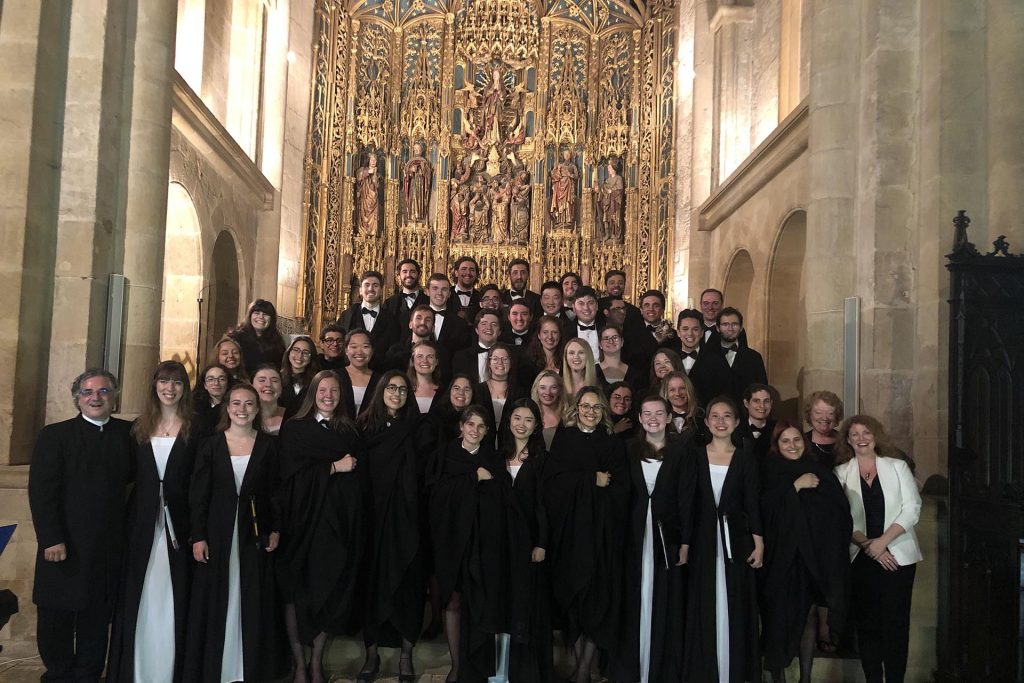 The choir at a church in Portugal

“I am math minded,” she says. “So I think in a similar way to what I was learning in my first theory class.”

Her success in that class and her vocal ability caught the ear and attention of Skip Wilkins, associate professor of music. He urged her to apply to be a CaPA Scholar.

The Creative and Performing Arts (CaPA) Scholars program challenges students to commit to their creative development and bring cultural experiences to the Lafayette College community. The scholars aren’t all arts majors and sometimes don’t even see themselves as artists, but they agree to work with an artistic adviser and use a grant of $7,500 over four years to develop their own projects that use the arts as a vehicle for igniting dialogue on Lafayette’s campus.

“The funding and advising in CaPA has been truly extraordinary,” Emick says. “As the program adviser, Professor [Nestor] Gil reminds us this is an opportunity to learn to trust ourselves as artists and do something awesome.”

Awesome is an understatement. “CaPA has helped push myself, to see what I can create and make,” she says.

Emick used some of her funding to pay for private voice lessons with Eric Van Hoven, instructor of music, who has performed with opera companies worldwide and on Broadway.

“I could extol his virtues for hours,” she says.

She also used some funding to help support her recent performance tour with the College Choir in Portugal. 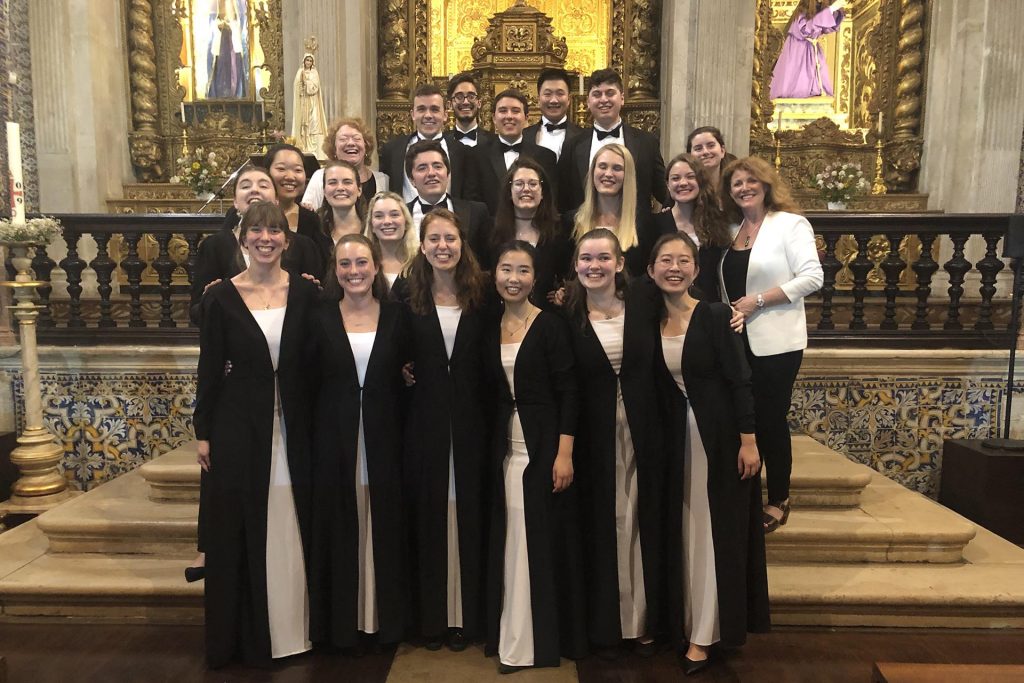 The choir at a church in Portugal

Members of the Chamber Singers and Concert Choir, 22 in total, made the trip. Together with Kelly, they performed 15 pieces of music, a 60-minute program over an eight-day schedule. Four concerts were on the itinerary—three as the group alone and one concert shared with students from University of Coimbra, one of the oldest colleges in Europe, established in 1290.

The groups traveled to four cities in Portugal—Lisbon, Coimbra, Torres Novas, and Porto—and sang to full houses of welcoming audiences.

The funds also have helped with conducting lessons.

“I am a quiet but opinionated choir member,” Emick says. “I have thoughts about music selection, performance order, and stylistic approach, so this was my chance to act on that.”

Little did she know how hard it would be.

“It is easy to talk about but creatively challenging to conduct,” she says.

Emick conducted her peers in rehearsals and at the spring choir concert with the song she chose, “O Lux Beatissima” by Howard Helvey. Picking the music and teaching herself and other performers brought worry.

“I faced self-doubt and fears of being unprepared,” she says. “I was vulnerable to stand in front of people I care about and do something I care about. If it went poorly, I’d be responsible. Luckily, the choir members were fantastic and flexible. Our mutual respect was key.” 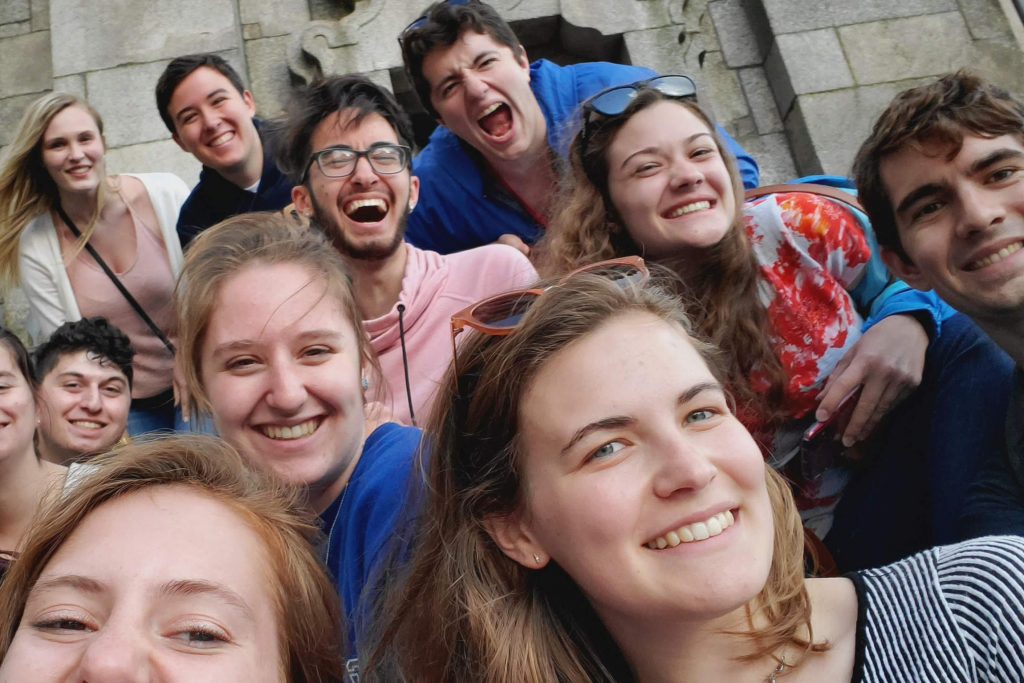 Emily and fellow choir members mug for the camera on their trip to Portugal.

Her conducting debut came off wonderfully.

“Emily took her new responsibility of conducting her peers very seriously,” says Kelly. “Every time she stood in front of them to conduct, she was prepared with the material and ready to adapt in real time to the sounds she heard. Becoming comfortable with her new authority as conductor, she also recognized the importance of respecting every member of the ensemble.”

The group responded in turn with its attention, support, and impactful music-making.

“Emily’s work with the choir was so impressive,” says Kelly, “that I invited her to conduct the piece on our performance tour to Portugal.”

It helps to be on both sides of the stand.

“To conduct and perform helped me to understand what’s needed and wanted on each side,” Emick says.

Which only seems to make her more qualified for a future of performance.

“I don’t see myself as a professional singer, but someday, I will use all that I have learned in community and church choirs and feel more than capable of doing something awesome.”