Profs. Wendy Wilson-Fall and Andrea Armstrong discuss the idea of 'who belongs where' and barriers that prevent everyone from connecting to nature Twitter

On Oct. 21, Wendy Wilson-Fall, associate professor and chair of Africana studies, and Andrea Armstrong, assistant professor of environmental science and studies, joined as guest speakers in “Race & Space in the Lehigh Valley: Where We Are and Where We’re Going,” the second digital forum of a two-part event series that explored the relationship between race and the region. 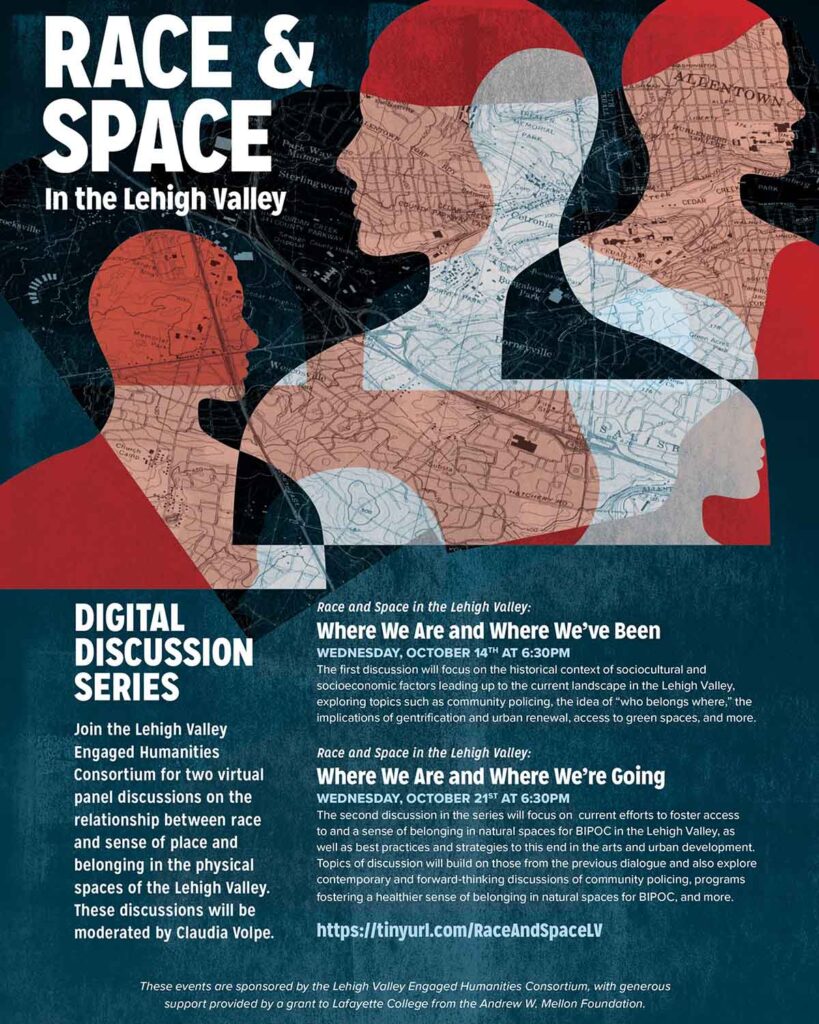 The event was sponsored by the Lehigh Valley Engaged Humanities Consortium (LVEHC), with generous support provided by a grant to Lafayette College from the Andrew W. Mellon Foundation, and hosted by Claudia Volpe. Discussions focused on current efforts to foster access to, and a sense of belonging in, natural spaces for BIPOC in the Lehigh Valley, as well as best practices and strategies to this end in the arts and urban development.

The goal of the overall event—the first part of which took place Oct. 14—was to hold and encourage contemporary, forward-thinking conversations about these and additional topics, including community policing, the idea of “who belongs where,” and the implications of gentrification and urban renewal.

Hashan Batts of Promise Neighborhoods Lehigh Valley, Melanie Lino of Afros in Nature and Made by Lino, as well as Rayah Levy of the Bethlehem Area Public Library and Black Bethlehem Oral History Project were also among the featured panelists.

Armstrong began the discussion by describing her recent research, which inspired the evening’s topic. When she arrived in the Lehigh Valley in 2016, Armstrong was initially interested in studying water quality and management in Easton-area sources such as the Lehigh River, Bushkill Creek, and Delaware River. Her work, however, took a different turn. As someone who would frequently walk the trails alongside Easton water bodies with her daughter, Armstrong noticed that not as many recreational trails exist in the area’s underprivileged communities and neighborhoods that are predominantly inhabited by people of color. 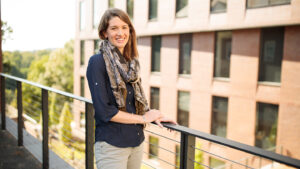 “It was evident that there was a history of environmental racism imprinted on the landscape, and an infrastructure that has the potential to determine who uses trails, who gets outside, and who feels involved in outdoor recreation, and subsequently environmental movements and initiatives,” Armstrong said.

Alongside her husband, Brian Greene, who is director of trails and conservation at the Delaware & Lehigh National Heritage Corridor, Armstrong set out to conduct a survey of trail visitors and analyze their access to the trails, how welcome they feel when they use the trails, and how those factors might affect their views of the environment.

“There was a stark difference between how included people of color felt on the trail and how included white people felt,” Armstrong explained. “People of color did not feel as welcome, did not feel as included, and didn’t communicate with other people as part of their community on the trail as often as white people do. We saw this finding as a sign that this history of racism and exclusion from environmentalism is alive in the Lehigh Valley, and there are things that can be done to remedy that.” 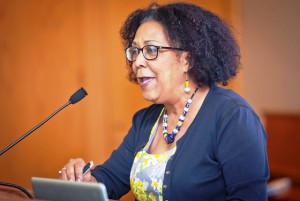 Wilson-Fall went on to discuss research she conducted with Lafayette students in her Black Experience class (AFS 211) on the presence and history of Black people on the Lehigh Canal, in an effort to help students better understand the community that hosts the College. After Wilson-Fall’s class broke up into teams and explored community and historical archives, they found what she calls a “history of exclusion.”

“We dug and scratched around as much as we could, but we did not find much evidence of Black presence,” Wilson-Fall said. “I think part of the challenge is to deepen what people think of when they think of African Americans. What data are they using that is feeding their understanding, or lack of understanding, about Black and brown people? We pretend that we have no shared history in this country, when we actually have a very long shared history in this country, since people of color first came here. Since immigrants from Europe came here, every generation has been remodeling this fantasy of unshared histories, otherwise it would have gone away.”

She went on to share her own experiences with feeling unwelcome on the Easton trails.

“I have two adult sons, and I don’t think they would walk on the trail without me or someone else that can mitigate danger,” Wilson-Fall said. “They feel that they have to ‘put on a costume’ to walk on the trail; they would have to wear something that says, ‘I’m jogging’ or ‘I’m doing a sport’ to be less suspect, which is very unfortunate.” On another note, Wilson-Fall observed that what usually happens is “when people of color have moved into various neighborhoods, the people who are not of color leave, and the space loses value. That space is no longer invested in. I’m all for insisting on an ongoing dialogue that might even require some activities that we wouldn’t think of as part of managing community development.”

Recordings of both panels can be viewed on the Race & Space in the Lehigh Valley Discussion Series Facebook page.