Prof. Susan Wenze is working to better understand the unique mental health treatment needs and barriers to care for parents of twins and triplets Twitter

Caring for a newborn baby is an exciting and joyous experience that also can be exhausting and overwhelming. Twins or triplets provide more to love, of course. But caring for multiple babies at once is a bigger undertaking that can multiply the stress and struggles of early parenthood. 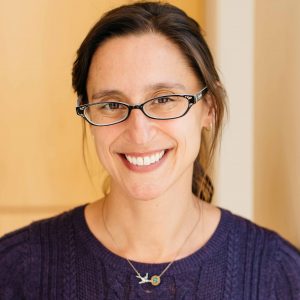 As Susan Wenze, associate professor of psychology, explained during her recent Jones Faculty Lecture, “Perinatal Mental Health and Postpartum Support in New Parents of Multiples,” parents—in particular, moms of multiples—face specific challenges that increase their risk for mental health issues. Intervention strategies that address the specific needs of this group are needed.

And the need has grown in recent years: The rate of twins and other higher-order births has risen dramatically over the past few decades in the United States and other Western countries. Despite the growth of this population, Wenze discovered a lack of documented research focused on this group. She is actively working to fill that gap.

Wenze was selected by the Office of the Provost to deliver the Jones Faculty Lecture, which was established in 1966 to recognize superior teaching and scholarship at the College. Wenze, who recently earned tenure, joined the College in 2014. She studied psychology at Cornell University before receiving her M.S. and Ph.D. in clinical psychology from American University. Her research focus is the assessment and treatment of mood disorders, such as depression and bipolar disorder, as well as related concerns, including stress and anxiety.

Within that broad area of study, she is particularly focused on perinatal mental health, especially among new parents of multiples. It started as a small side project, sparked by her own personal experience as a mom of identical twin girls (who are now 10), but has since grown into a passion project.

In her talk, Wenze shared how awesome it is to be the mom of twins, how fascinating it is to see their similarities and differences, and how much joy she experiences watching their special sibling relationship bloom. She also shared that in the early days, it wasn’t always easy to focus on those things.

Fueled by her professional background and innate curiosity, Wenze began to dig into the literature after her maternity leave. While there is a well-documented body of work focusing on the obstetrical and neonatal risks of multiple gestation pregnancies and outcomes, there wasn’t much on the mental health impacts.

In 2014, just before starting her first fall semester at Lafayette, Wenze attended a Twins Day Festival in Ohio, which was billed as the largest annual gathering of twins anywhere in the world. A Lafayette EXCEL scholar accompanied her and helped her conduct a survey among attendees.

About half of those interviewed, 48%, said that they would have definitely been interested in receiving mental health treatment during postpartum, but less than 10% reported receiving any care. In addition, 63% said they didn’t recall a health care provider discussing postpartum health with them.

Even with a high interest in receiving care, there are many barriers. It’s hard to find time to shower when you’re caregiving for multiple newborns, let alone go to a therapy appointment. It also can be challenging to arrange for child care and leaving the house can create feelings of guilt. That’s why Wenze is focusing on electronic health options.

“Encouragingly, this seems to be a population that is particularly open to atypical mental health treatment paradigms, like mobile health or e-health approaches,” she said. “Those kinds of approaches are increasingly shown in the literature to show equivalent treatment outcomes as face-to-face care. And they have the advantage of getting around a lot of barriers to care that we are seeing in this population—time constraints, financial constraints, transportation constraints. So this is all promising right now, and as a treatment development researcher, I’m excited to see this.”

Wenze is currently working on a study that will provide more insights. She recently recruited 130 women, about half of whom were new moms to multiples and half of whom were moms of single babies. She and her collaborators asked them about depression, anxiety, stress, sleep, postnatal bonding, and relationship satisfaction at a baseline assessment, followed by real-time, momentary mood, stress, fatigue, bonding, and sleep via a series of mini-assessments that were sent four times a day over seven days. Each mini-assessment took about two minutes to complete. Participants were prompted via text and completed the surveys online.

The preliminary results show that parenting stress was marginally higher in moms of multiples versus moms of singles, but there were no significant overall differences in baseline depression, anxiety, sleep quality, postnatal bonding, or relationship satisfaction between the two groups.

When you zoom in on the findings, however, it appears that moms of multiples experienced more momentary negative feelings of stress, overwhelm, and fatigue, as well as worse sleep outcomes. So, when measuring their moment-to-moment experiences throughout the day, they report more negativity than moms with one baby.

“These findings show a more nuanced look,” she said. “They highlight that postpartum experiences for moms of multiples are different and underscore the extra tailored support needed.”

Wenze shared that in the future she’s interested in exploring the roles of partners, since there has been very little research devoted there, as well as investigating the differences in other countries and cultures.