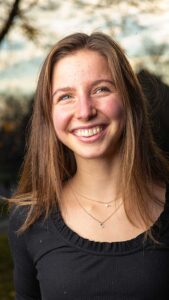 When Kristen Steudel ’22 was in fifth grade, her teacher challenged her class to build—and then race—magnetic cars. While scouring her house for materials for her project, Steudel remembered there was an old computer in her garage that her family was getting rid of. And a lightbulb went off in her head: Tucked away inside the machine were “super magnets,” so she took it apart and retrieved what ultimately became the keys to the young innovator winning the race.

The daughter and granddaughter of engineers, Steudel was enthralled by movement and physics growing up. She fondly remembers working on engineering projects with her dad and studying for advanced math with her grandfather. But she also had a fiery appetite for learning across subjects—sparked by her mother, who took her on exciting trips to various museums and historical sites, and stoked by her relationship with her older brother, with whom she enjoyed playing “school” at home. Steudel’s academic interests were so wide-ranging that she often borrowed more than 50 books at a time from her local library.

In high school, Steudel was exposed to economics and how it was set in motion at local businesses, and she became heavily engaged in community service through the Girl Scouts program. “I learned that economics isn’t just about financials; it’s about how we optimize our resources in society to improve people’s quality of life and make things more accessible to them,” she says. “I became interested in figuring out how to combine technology and economics to create the most opportunities for everyone.”

After graduation, Kristen Steudel plans to head to graduate school to study the challenges of operational and environmental variability to improve the robustness of remote sensors.

By the time Steudel was ready for college, her academic ambitions had taken shape, molded by an inclusive philosophy for which she couldn’t yet pinpoint a name. She was soon to find out that Lafayette College was driven by the very same philosophy, which Nicole Farmer Hurd identified and spoke at length about in her inaugural address in October 2021: the “and” philosophy. Steudel wanted to think up inventions. And build them. And implement them in ways that would help others and fulfill societal needs. There was nothing she didn’t dream of doing. No discipline she couldn’t conquer. No obstacle she wouldn’t leap over to get things done. And she knew Lafayette was the place where she could make it happen.

“I wanted to study economics and engineering, and a lot of colleges told me I would have to attend two separate schools and it would take five years,” Steudel says. “Lafayette was the only one that said ‘yes’ to me when others said ‘no.’ They didn’t bottle me into one discipline. This is a place where they want students to be who they really are.”

Steudel’s ever-burning passion and all-embracing approach to knowledge have not only led her to becoming a star scholar and researcher at Lafayette, but also landed her on the reserve list for the Marshall Scholarship, one of the most prestigious scholarships offered in the U.S. It’s a feat accomplished by only two other students in the College’s history.

“This is truly a tremendous honor,” says Julia Goldberg, who is the associate dean of advising and co-curricular programs as well as the director of prestigious scholarships and fellowships at Lafayette, and who advised Steudel through the application process. “The Marshall awarded only 41 scholarships this year. To be highly ranked among those incredible scholars speaks to Kristen’s talent, dedication, and hard work.”

While working toward her B.S. in mechanical engineering and her B.A. in economics and mathematics, which she’ll be earning this spring, Steudel seized every opportunity she could to engage in research across a broad range of fields—opportunities that, she says, are unique to Lafayette. In 2018, she studied Ukraine’s Orange Revolution, Estonia’s Singing Revolution, and other nonviolent movements with Katalin Fabian, associate professor of government and law, then later presented her findings at the LVAIC Global Student Conference. She’s also conducted economics research on the groundwater irrigation policies in Ethiopia alongside Charles A. Dana Professor of Economics David Stifel, and math research with Trent Gaugler, associate professor of mathematics, on optimal strategies for winning the game “Pass the Pigs”—the latter of which was admitted into the National Collegiate Research Conference in 2020.

In 2019 and 2020, Steudel worked as a manufacturing and design intern at Raytheon Intelligence & Space, which develops advanced sensors, training, and cyber and software solutions for civil, military, and commercial use worldwide. More recently, during summer 2021, Steudel interned at the Engineering Institute at Los Alamos National Laboratory to study the use of sensors designed to detect the structural integrity of bridges and buildings. She’ll be heading to the International Modal Analysis Conference in Orlando, Fla., with her Ph.D.-candidate research partners in February 2022 to present their work. Steudel is currently working on a senior design project with Amy Van Asselt, assistant professor of mechanical engineering, that focuses on finding a practical method to use compressed air as a renewable energy source.

Steudel’s thirst for learning and engagement, however, doesn’t end with research. In 2020, she participated in Technology Clinic, a two-semester program during which Steudel and a team of interdisciplinary students designed an asset map for the West Ward in Easton, Pa., to assist business owners looking to open up shop in the area, and nonprofits applying for grants. She is the vice president of Lafayette’s Running Club, a board member of Tau Beta Pi, a participant in the Kovalevsky Society (a peer mentoring program for women scholars in STEM), and a member of Society of Women Engineers. Steudel also enjoys volunteering for LaFarm and supporting its initiatives to produce for Lafayette’s dining halls, recycle nutrients from composted food back into the soil, and serve as a home for collaborative student-faculty education and research. 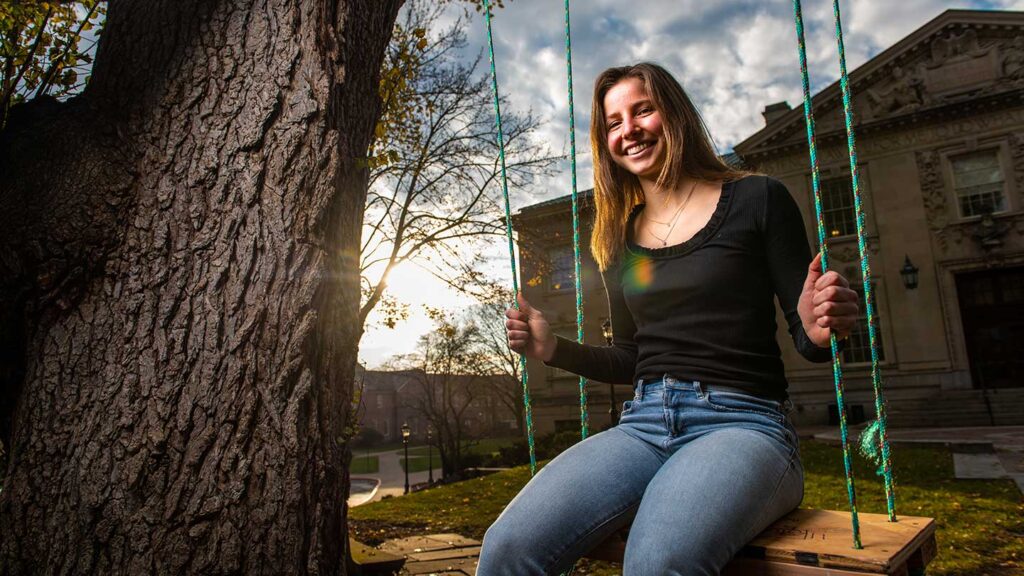 “Kristen is always thinking of ways to engage with and improve society through both her research and her extracurricular activities,” Goldberg says. “She not only has exceptionally strong analytical and critical thinking skills, but the ability to take theory and apply it to real-world situations and vice versa. Kristen is a uniquely curious, socially conscious creative thinker and researcher.”

Reflecting back on her time in college, Steudel says she couldn’t have achieved everything she did if it were not for the network she’s built at Lafayette.

“I have just learned so much,” Steudel says. “I’ve met so many incredible friends and worked with professors who have dedicated hours upon hours to making sure I accomplished what I wanted. I’m so grateful for all the people who have supported me over the years.

“The night my Marshall Scholarship application was due, Dean Goldberg stayed up with me until 1:30 a.m., helping me perfect every single word on the application,” Steudel continues. “Once I found out I had an interview, six different professors and deans—and even President Hurd—all mock-interviewed me. To have that kind of support from the school is just incredible, and it meant the world to me.”

After Lafayette, Steudel plans on heading to graduate school to study the challenges of operational and environmental variability to improve the robustness of remote sensors. She is also considering research in other areas. She hopes to one day earn a Ph.D. in either engineering or economics, and her long-term goal is to become a professor and lead mentoring programs.

“I hope to inspire other students to do interdisciplinary work between STEM and liberal arts, and I hope to inspire more of the ‘and,’ which is what Lafayette is all about. I want students to pursue all of their passions and achieve all of their dreams—not confine themselves to just one. I learned from so many different areas, and I learned how you can be part of something a lot bigger than yourself by working with people from different backgrounds and perspectives. By working together, we can achieve far more than we can on our own.”

Steudel spoke to Lafayette Sports Network about her accomplishments:

Meet students taking innovation and creativity to the next level