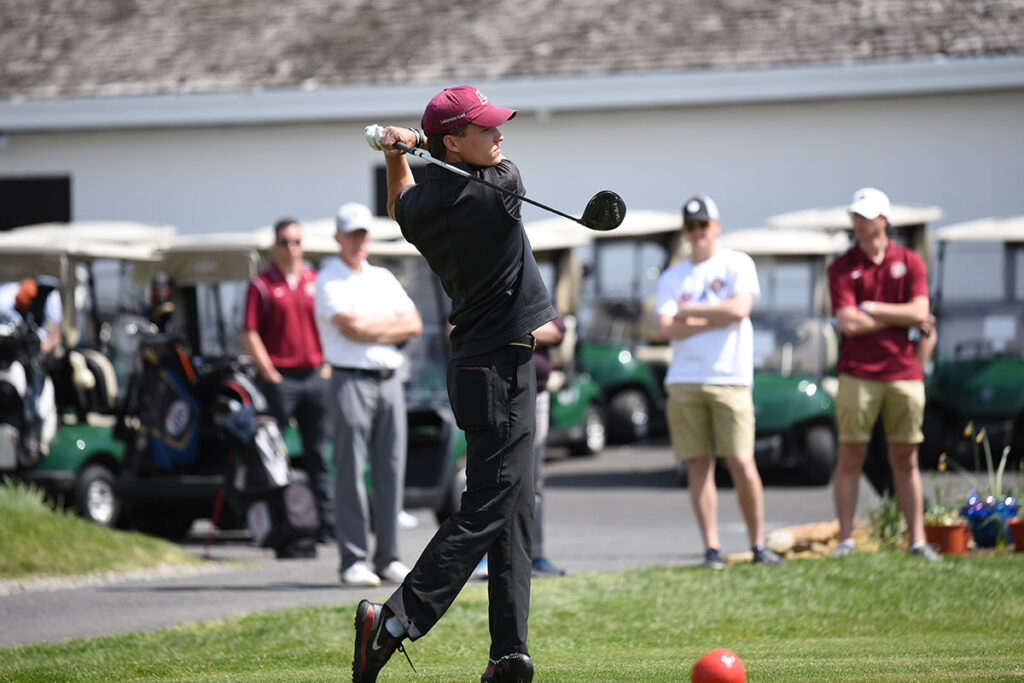 The final chapter of Ryan Tall ‘22’s college career is yet to be written after sinking a 30-foot birdie putt Sunday on the first playoff hole to win the Patriot League Men’s Golf individual championship and earn Patriot League Men’s Golfer of the Year honors. With the recognition, the Devon, Pa. native will participate in the 2022 NCAA Division I national tournament, with regional selection being broadcast live on the Golf Channel on Wed., May 4 at 4 p.m.

The men’s golf team will gather in Kirby Sports Center room 227 to find out which of six regional sites Tall will head to (CA, CT, FL, OH, OK, or TX) for the tournament taking place May 15-18.

Tall opened the golf season finishing tied for second with a one-under-par 215 at the Lagowitz Memorial Invitational hosted by Colgate, then went on to place third at both the Gimmler Invitational and Connecticut Cup. He was a top Leopard finisher at the Georgia State Invitational, where he shot a five-under-par 211 to help lead Lafayette to a second-place team finish. With Lafayette hosting the Patriot League Championship for the first time ever this season, it placed Tall in the spotlight on home turf. 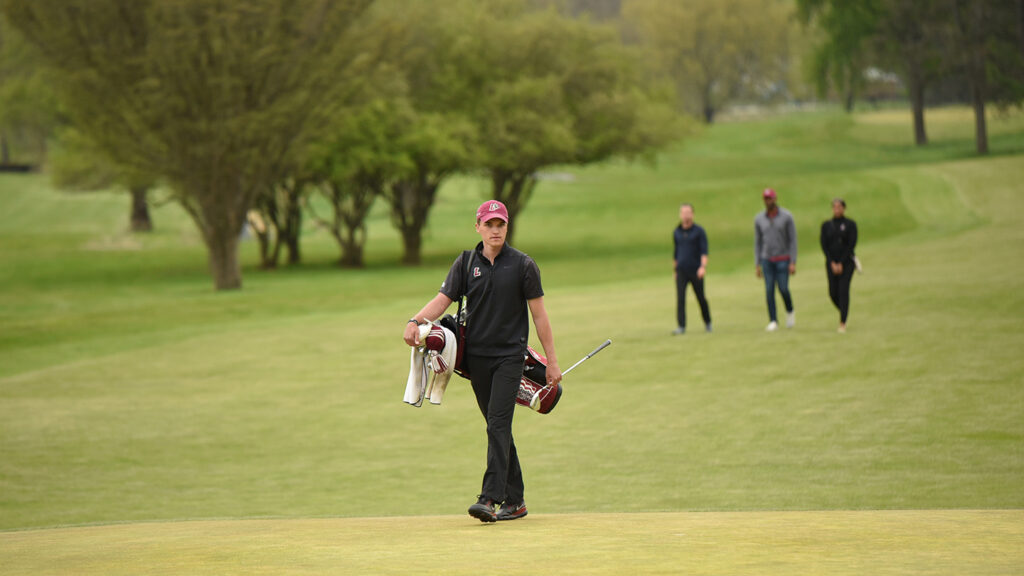 “Being able to win at home is something I’ll remember for the rest of my life,” says Tall. “My parents were there and so many of my friends came out, so to have everyone there was the coolest thing. Our team plays that course every day, and coming into this week, it felt like we had a lot of guys who were ready to stand out. It’s so easy to get caught up in both the team competition and the individual component, but I really tried to focus on my individual game and knew that I could only control what my own game is.”

In his four years at Lafayette, Tall has displayed a propensity for success on the golf course. It was well before his collegiate career, however, when he first picked up a club. Both of his parents are golfers, and it was second nature to follow in their footsteps when he started playing competitively at 12. His father (John Tall ’81) being a Lafayette alum made his college choice second nature, as well. Being able to fit into the golf roster here right away, with solid leadership on the team, allowed him to focus on his development over four years and relieve some of the self-inflicted pressure to perform that naturally comes with collegiate athletics.

“The opportunity to play right away [in my first year] meant a lot to me. I enjoy the game so much, and that was a driving factor for me. You’ll find a lot of people take lessons and are really structured about the way that they practice. But for me, the game is like an art. It’s much less about the structure, components, and technicalities of it all, and more about seeing a course or seeing a shot,” Tall muses. “It’s being creative and hitting all the different types of shots. That’s something that I’ve maintained throughout my four years—that kind of youthful creativeness—in terms of getting better and growing.”

With no expectation that golf will be part of his professional career, the economics major and government and law minor has also taught himself to remain focused on his education, and is grateful for the amount of support that he’s received from his professors and the Lafayette community at large. After a mix of internships and externships, including a stint as a wealth management intern at Morgan Stanley last summer, Tall has been working with the Gateway Career Center and with the Lafayette Alumni Network to point him toward getting a start in a career in property casualty insurance.

“I enjoy the game too much to ever make it my job,” he concedes. “Golf, as a career, is about being in the right place at the right time. There are so many incredibly talented golfers and sometimes there’s not enough space for everybody to coexist. However, I’m forever grateful for the support system I’ve received. The Lafayette community has really embraced athletes, and my professors have been so gracious with their time and flexibility. I’ve had a great relationship with people from the athletics department, and you can always feel the support from those guys, even if they’re not present in the moment. I owe so much to coach [Jim] Hutnik ’78, who has always been someone I can call on at any time.” 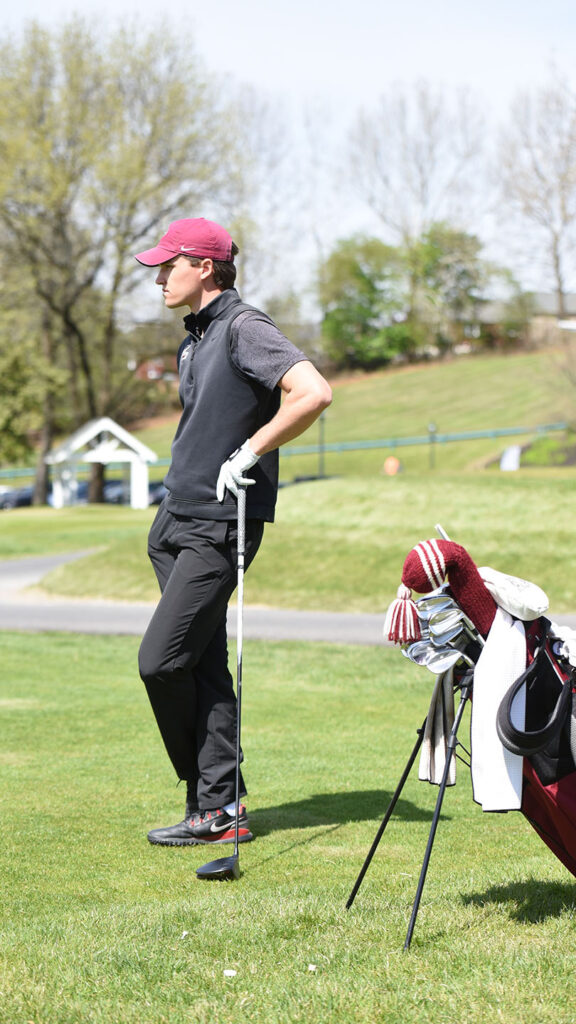 Looking ahead to the NCAA tournament, which falls into a whirlwind month of finishing his senior year, finals, and Commencement, Tall’s goal for himself is to relax and enjoy the moment—and not to get caught up in any expectations.

“You’re going to have good days, and you’re going have bad days. As a leader on the team now, I tell the younger guys that it’s okay to want to win—but if you make that your only goal, you lose out on those moments of joy,” he acknowledges. “A game shouldn’t be stressful. It shouldn’t determine how the rest of your day goes. For me, really trying to step into that mindset has been something, throughout my four years, that I’ve really tried to embrace.”

Favorite golfer: “I have a lot of respect for Tiger Woods. From a professional standpoint, the livelihood for a lot of golfers would have been very different if Tiger hadn’t been so successful. He brought a lot of new fans to the sport.”

Advice he’d offer to first-year athletes: “Think of it as an opportunity to learn. This campus does such an amazing job of giving you so many different opportunities.”

The unconventional path to success

Patriot League Player of the Year Leanna Deegan ’22 finds success on the volleyball court and in the classroom
Categorized in: Athletics, Class of 2022, Economics, Featured News, Student Profiles, Students