A debilitative medical condition sidelined his football career and almost took his life—twice. How Kaizer Butler '21 resolved to learn and live Twitter

Every defensive back lives with the threat of being leveled hard by a charging 300-pound guard looking to clear a path for a running back.

Hale and healthy at 6 feet, 205 pounds, Kaizer Butler ’21 arrived at Lafayette in fall 2015, ready to absorb some hits playing football on the starting lineup and take advantage of the College’s rich liberal arts curriculum.

But instead, he faced an unwelcome opponent at the onset of his college career, a rare autoimmune disease that brought him near death twice, sidelined his promising football career, and delayed his path to his diploma.

While studying for finals in spring 2016, Butler developed body aches and infections that didn’t respond to antibiotics. Then came acute kidney failure, with his lungs filling with blood to the point where he felt he was drowning. He ended up on life support and was diagnosed with granulomatosis with polyangiitis, which causes inflammation of the blood vessels in the nose, sinuses, throat, lungs, and kidneys. Left untreated, the condition can be fatal.

The disease continued to stalk Butler, putting him back on life support on the first day of classes in August 2017 after his girlfriend at the time found him unresponsive in his dorm.

Although he was forced to give up football, Butler persevered in stoic fashion, balancing visits to see medical specialists and administering self-care at school while managing a modified academic schedule. After his second time on life support, Butler began to recover and regain his strength through exercise, limited weight training, and a will to gain back what he had lost; it took him two months to begin managing the disease and return to some normalcy in his life.

On a recent sunny May afternoon on a Zoom call from his home in Chatsworth, Calif., Butler displayed infectious smiles, energy, and optimism heading into the final weeks of the semester, his challenging college journey near its end.

You’d never know he had faced and recovered from a disease that left him with severe kidney damage, a kidney transplant, and collapsed lungs at one point. Treatments included chemotherapy, steroids, and dialysis. “I had a stent in my neck, and my throat was cut open to help me breathe when I was incapacitated,” Butler says. Luckily, he remembers little of his most severe medical emergencies. 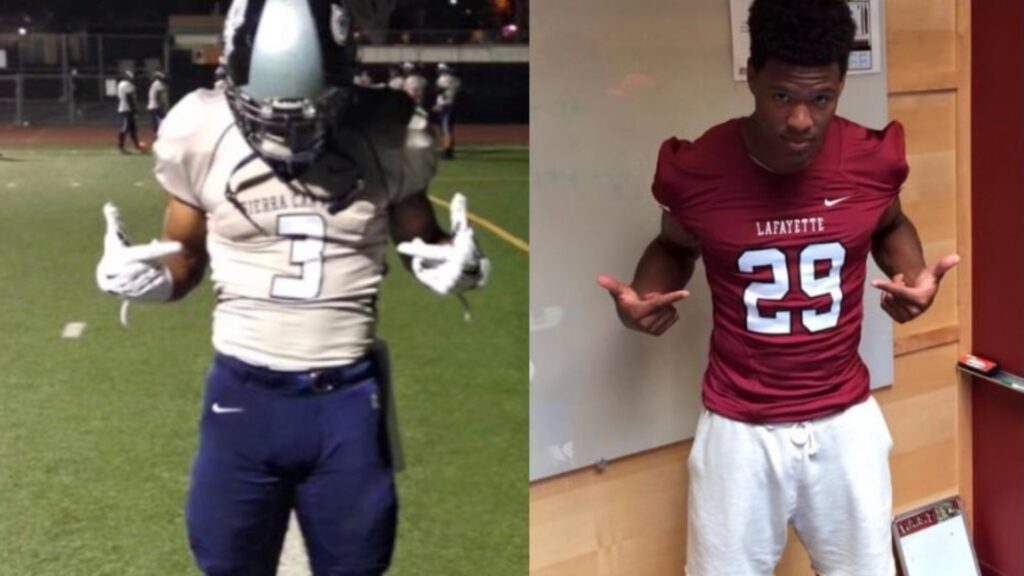 Butler on the gridiron in high school and at Lafayette

“You know, I’m honest with myself,” he says. “Looking back, that was all I had, the honesty to take the necessary steps to come back. I started off easy with pushups and situps, and eventually worked my way up with weights and running.”

A supportive network on campus helped him rebuild. Butler speaks fondly of the people who stood by him at his lowest point.

“Dean (Tim) Cox has been there to encourage me academically and keep me motivated,” he says. “But it was the football staff that became part of my extended family. They helped my mom get out here when we didn’t have the necessary means to do that because of all the medical expenses. It’s one of the things I’ll never forget.”

“Kaizer’s journey has been rockier and more unpredictable than most,” says Matt Bayly, director of sports medicine. “Yet he has consistently remained a truly genuine gentleman throughout. His positive vibe has been as reliable as rain.” 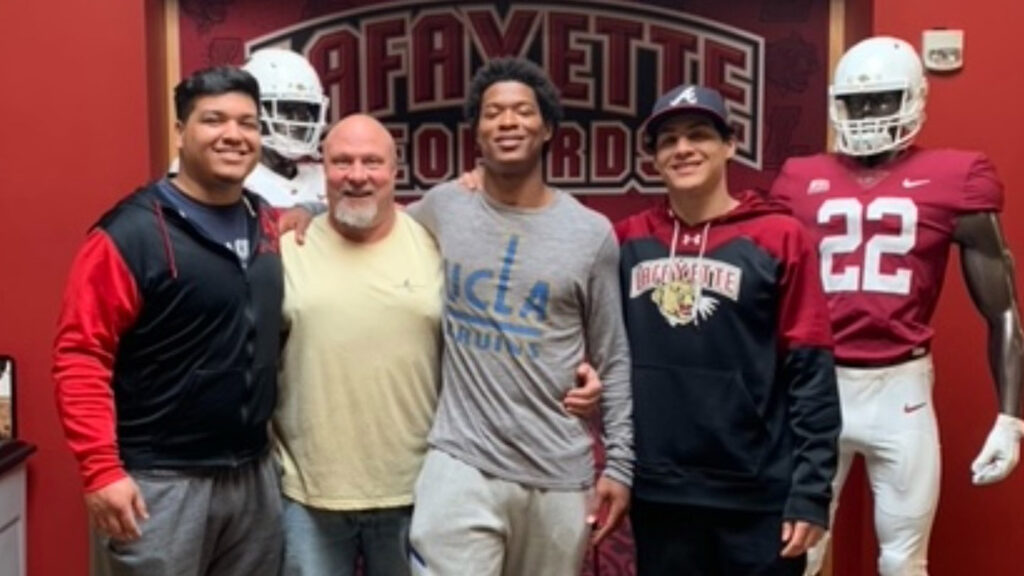 Butler’s mom, Kian Hernandez, says he endured other health hurdles, including viral meningitis during his junior year at Sierra Canyon High School and a season-ending shoulder injury in 2015.

“He was rehabbing from the shoulder injury and getting ready to play football,” she recalls. “Kaizer was at the top of his game, super healthy. And then within three weeks, he was intubated and given a 50-50 chance, so it was a pretty rapid decline. He could barely walk, like he was a 90-year-old man. It was a shock; he was literally the healthiest he had ever been.”

His grit shone through, despite his debilitative medical condition. 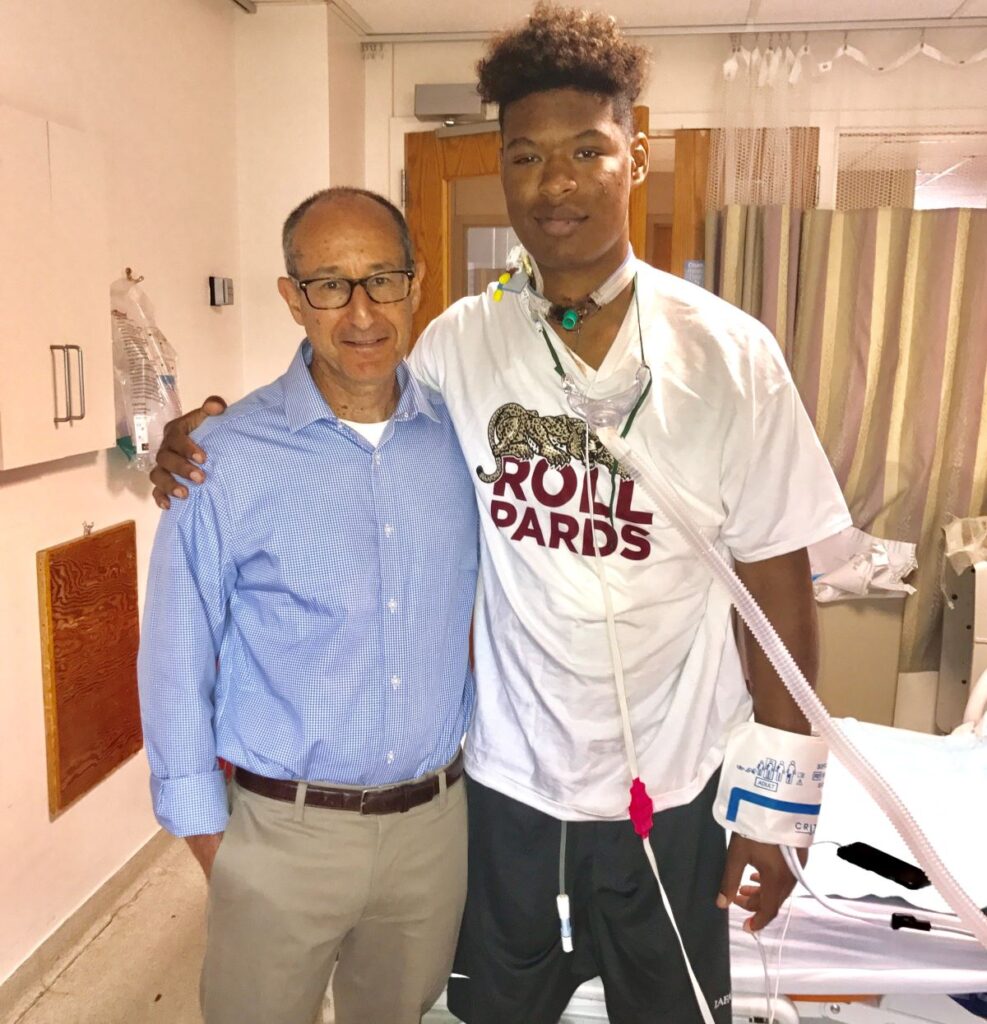 “He still wanted to play,” Hernandez says. “But his kidneys, because of the autoimmune disease, kept declining. And then that’s eventually when they decided to put him on dialysis. They put him on a type of dialysis so he could play football. He eventually got a kidney transplant and was going to play but then decided not to. He never played a game after his freshman year.”

His return to campus for the spring semester in 2017 would be, in hindsight, the beginning of a very arduous journey, Bayly says.

“It was one that would include—as a college student—having to self-administer dialysis in his dormitory,” he adds. “It was one compounded by how very difficult it would be not only for anyone, but particularly for somebody to whom family is the pulse of everything he does, yet that core family unit was 3,000 miles away.”

Mindful of that bond, Lafayette did its best to close the distance and stay in contact with Butler’s family in California.

“Lafayette was incredibly supportive,” Hernandez says, recalling her appreciation when she received a call from President Alison Byerly. “They helped accommodate me in so many different ways, as far as my stay and making sure that I had what I needed when he was sick and I would go out there. It was all so thoughtful and generous. 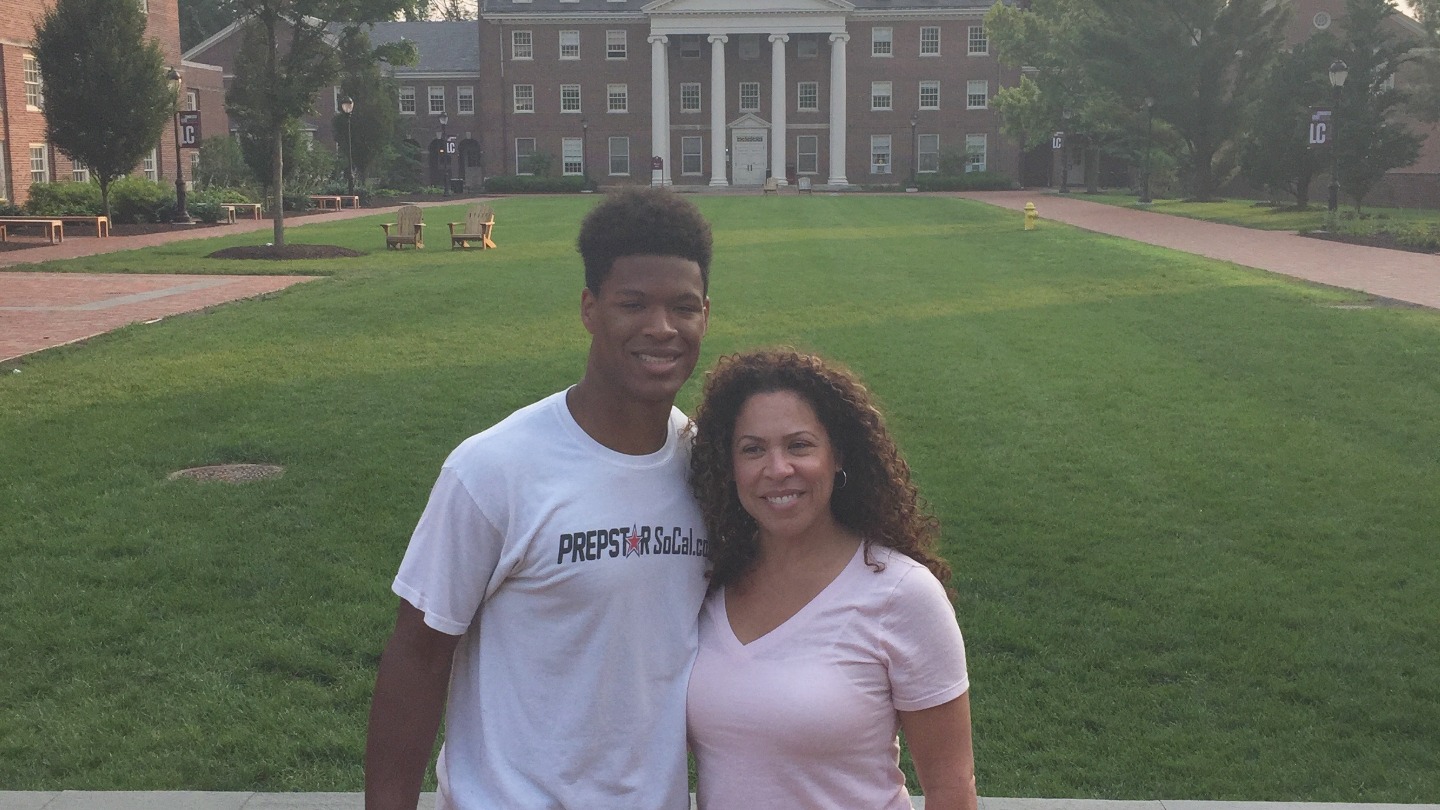 Butler with his mom, Kian Hernandez

“Lafayette, because it’s a smaller school, clearly understands the importance of personal relationships with the students and families,” she adds. “I really felt like they came through in so many different ways. I didn’t think that a school would do that. And they totally did.”

Asked how he feels physically, Butler flashes a smile of confidence.

“My core is slightly offset from incisions, and there’s some lingering discomfort from the shoulder injury, but I’m getting it back,” he says.

His future with a Lafayette degree in economics, which he plans to finish this summer, is equally promising. Butler plans on a career in real estate coupled with community volunteerism to help address social justice issues.

For Tim Cox, associate dean of advising and co-curricular programs and junior and senior class dean, the conclusion of Butler’s Lafayette experience marks a significant moment.

“Kaizer was one of the first students I met when I came to Lafayette,” he says. “Within the first few minutes of our meeting, I was blown away by his story and his determination to push through.” 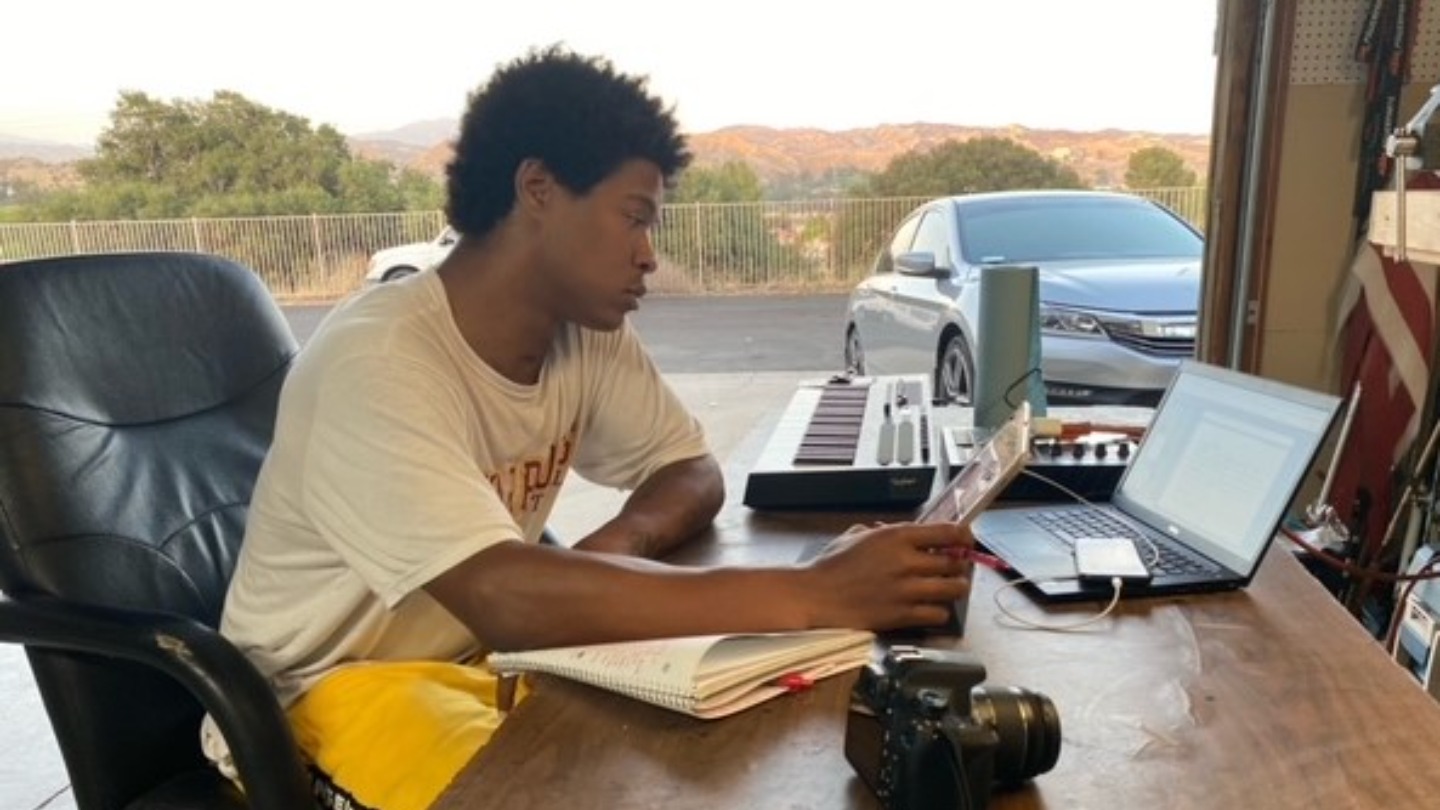 Butler studying at home during the 2021 spring semester

Butler made him realize two things about Lafayette students, particularly those who are first generation.

“The first is that there are many stories that go untold and unheard. Although it’s a cliché statement, it is true that we cannot judge a book by its cover,” Cox says. “It teaches us to focus on the whole student beyond their academics and to express compassion, even when we are familiar with the entire story. I appreciate his professors for providing so much support through these past few years.”

The second realization is that all students represent the Lafayette ideal in some way, whether it’s through their potential, perseverance, persistence, or purpose.

“Kaizer exhibits all four, but I think we can all agree that purpose is truly in the foreground,” Cox says. “The ability to fulfill one’s purpose to explore, learn, and live, despite the circumstances, exemplifies the resolve of Lafayette students.”

Hernandez says her son’s experience solidifies in her the importance of having good health. “If you don’t have it, you can’t do anything else,” she says.

“I just want him to be happy and healthy in whatever he chooses to do,” she says. “I want him to fulfill his dreams.”

Butler says he found power in his many ordeals.

“I found the power in myself, and power and appreciation from all the people who helped me,” he says. “I take heed in all that has been given to me. I appreciate that every day.”

For many people on the Lafayette campus, Butler will be remembered as a humble, kindhearted role model, Bayly says.

“Although his challenges have been many, he is an inspiration for those having had the privilege to have crossed paths with him,” he says.

Driven by passion for family, technology, and helping others